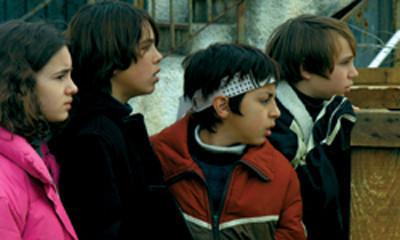 Unconventional Christmas films have always been a favorite of mine, whether it's a film about a murderous snowman or an unhappy gingerbread man, I'm usually on board for spicing up the dullness of Santa and snow. While “The Christmas Tale” does feature a Santa, it takes place in a warm palm tree laden town in Spain. But the focus here is not on Christmas, it's on how to approach someone who has put themselves on the naughty list.

In the opening scene, two of the kids, whose names we learn later through brightly colored letters that flash up on the screen, are watching a schlocky zombie film featuring an unlikely zombie slayer resembling Joe Strummer with a sleeveless black vest, sunglasses, and a slick black pompadour. The film they are watching, called "Zombie Invasion," features cobwebbed sets, a girl dressed in a silver spandex outfit, and great lines such as, “Calm down, cupcake. The zombie invasion is over.” If you are on board this far, the film only gets more appealing.

Director Paco Plaza, who worked with fellow “6 Films to Keep You Awake” director Jaume Balagueró on “[Rec]” and “[Rec]2” has put together what I think is one of the best short horror films of the bunch. It's a delicately assembled homage to films like "Goonies', exploring the loss of innocence and the boundaries of friendship. “The Christmas Tale” explores youth and the freedom/trouble that comes with making decisions before you are old enough to understand the consequences.

Five friends, four boys and a girl named Moni, discover a passed out bank robber dressed as Santa Claus at the bottom of a hole in the woods. Two of the friends ride their bikes to the police station to tell the police what they have found, but have to wait because the cop is busy giving recipe directions. While the cop is distracted, the friends see a fax that has come in showing the bank robber. They take the sheet of paper and ride back to their friends in the woods just in time to stop them from helping her escape from the hole.

The kids decide that they should wait to free her, in case there is a reward for her arrest. They unload as much candy on her as possible for food before covering her hole with branches and leaves and leaving. While the kids are at home, they find out that not only is the bank robber wanted for being dangerous, but she has stolen 2 million in Spanish currency. The kids decide to leave her down at the bottom of the hole until she tells them where she hid the money, and they'll leave her there until she dies if they have to.

The set design for “The Christmas Tale” is immaculate, each pan across a room will display all kinds of objects from the 80's hidden in the background, "Ghostbusters" and "Star Wars" figurines to that weird color light up game called Simon. One of the character's, Tito, is also obsessed with "The Karate Kid" and wears a headband throughout the film. Altogether Plaza chooses playfully bright primary colors to illustrate his shots, to offset the kids from the brown and green of the woods that most of the film takes place in. One of my favorite locations comes towards the end when the kids are being chased through an abandoned theme park.

It's a fun rummage through the 80's and it doesn't forget plot either. The tension that builds between the five kids and the bank robber, whose name we find out is Rebeca, falls heavily on the side of the kids as they uncomfortably hold Rebeca's fate in their candy distributing hands. Rebeca is the only adult whose face is shown in the film, using a Charlie Brown effect to describe the relationship between the group of five kids and the adult world. Definitely watch this one until the end, as the final scene will surely have you pumping your fist, and maybe twisting a Rubik's cube, too.