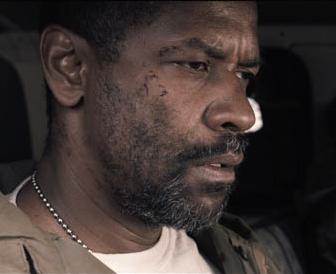 The Book of Eli (Movie Review)

Post-apocalyptic fiction is primarily concerned with survival. Defined most narrowly, in films like "Dawn of the Dead" or "I Am Legend," the survival is literally that of the main characters or the human race: will humans continue to walk the planet? Defined more broadly, however, in films such as "Mad Max" or even "Daybreakers," the question becomes how will humans continue to walk the planet? "The Book of Eli," the new film from the Hughes Brothers, falls squarely into the second group.

In the reality of the film, which borrows heavily from a variety of post-apocalyptic films and novels, the United States have been rendered desolate. It has been 30 winters, give or take, since "the world before." Denzel Washington plays a lone walker, making his way west. He knows not where, but is pushed by a voice -- a spiritual guide which tasks him with carrying a book until he finds the place where it belongs. Washington walks, hunts and sleeps, and he always makes time for his book.

The walker travels in peace, but the post-apocalyptic world is a dangerous one. Rapists and thieves abound -- not to mention the cannibals -- so the walker also travels incredibly well-armed. Dispatching of low-level toughs proves no challenge, but when the walker encounters a nascent, primitive society springing forth from the vestigial remains of a destroyed town, that's when his problems start to escalate. The fledgling town's leader, the budding despot Carnegie (Gary Oldman), fancies himself an educated, thoughtful man. He reads, something most future-humans cannot do. But there is one book that he longs for, the very same that the walker carries: the King James Bible.

As a simple, straight-forward post-apocalyptic struggle, "The Book of Eli" works quite effectively. The Hughes Brothers have taken an efficient, if not entirely inventive script from Gary Whitta, and given it a professional and action oriented treatment. The CG landscapes and sets are done well enough to suspend disbelief, and the acting carries enough weight to pull off the loftier goals of the film.

"Eli" falls short, though, by attempting to bite off a large chunk of the post-apocalyptic philosophic debate, and not shooting straight with its solutions. As mentioned above, in "Eli" the issue at had is how humans will live in this new reality. At the walker's arrival, the people of the town have started to move beyond the barbarism of kill-or-be-killed. Carnegie, as violent and repressive as he may be, acts as a law of sorts. He keeps a semblance of order, and if that situation had persisted, order may well have eventually lead to something like civilization.

As educated as he is, Carnegie knows there is a shortcut to furthering his reach, and there is little nuance about what that is. When questioned about his desire for the walker's book, Carnegie shouts: "The book is a weapon!" But to the walker, the book is a guide and a giver of faith. Indeed, these dueling ideas were front and center in the film's promotion, where posters featuring Denzel read, "Deliver us" and posters with Gary Oldman read, "Religion is power." This concept -- that religion or faith can be very different and conflicting things in the hands of different men -- is not a bad one to build a film around. The devil proves to be in the details, and in "The Book of Eli" those details eventually combine to make the film far less interesting than it might have been.

Much of the trouble comes when the film clings too closely to Christianity as the religion of choice. Oldman says at several points that he can exhibit greater control, that he can get the common people -- who he describes as idiots or worse -- to do as he wishes if only he can get the book. He very literally needs the exact words that it contains. This is well and good if one treats the King James Bible as a sacred text that contains the literal words of God. But it's never clear that he does (or indeed that the filmmakers believe this). Instead, it seems that Carnegie realizes it's an effective tool of control. Though if that's the case, then why wouldn't he just create his own religion? History -- which we can assume he's aware of -- is filled with literally millions of people who have invented their own renditions of monotheism, or even polytheism, to enrich their power. That Carnegie would be at once a brilliant leader who has successfully controlled his town for however many years, and also a bumbling nitwit incapable of crafting a lulling, comforting religious narrative for the purposes of control makes no sense.

Perhaps the bigger flaw with "Eli's" religious concerns is the walker himself. Traveling for 30-some years and reading everyday, the walker is intimate with his Bible. He studies it. But when the time comes to open up about it to Solara (Mila Kunis) he goes immediately to "The Lord's Prayer." This is an incredibly well-known prayer to present day viewers, but, one would have to think, if a total neophyte with no concept of Christianity were to pick up the Bible, the chances that they would latch on so heavily to that one passage seem rather small. Certainly, the prayer is given a space of significance -- appearing in two versions in two different Gospels -- but as the most effective and beautiful passage it just doesn't add up. Indeed, the walker's interpretation of the Bible is so ridiculously hollow that it's rendered completely without merit. At one point, asked point blank what he's learned from the book, he says to treat others better than yourself -- Jesus's Golden Rule. Good stuff to build a new world on, for sure. But did he skip over the first half? Because if taken out of the context of a church and its teachings, there's a lot of other stuff in the Bible that might not be as effective for building a new society.

The film's conclusion, which I don't want to spoil here, appears to undercut a great deal of the message that had been built up over the course of the film. That being said, though the third act stumbles home, it nonetheless serves as a genre-friendly wrap-up for both the philosophical and worldly events that have transpired. Concerned as they are with establishing order in an outlaw world, post-apocalyptic films of "Eli's" type share much with Westerns. The Hughes brothers understand that, and in many ways they play by those genre conventions more than any other. And though the film loses much in my estimation for imprecise and empty religious rhetoric, it packs enough of a wallop to earn the cost of admission.

Halloween III: Season of the Witch

Empire of the Ants