Beyond the Black Rainbow (Movie Review) 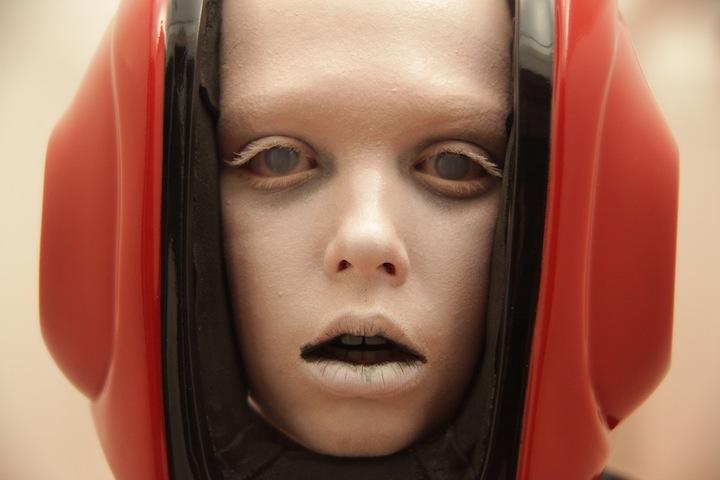 "Beyond the Black Rainbow" is a film that defies criticism. It's mercurial, only threatening on occasion to amass into something solid, something that can be quantified and critiqued. In fact, I'd be inclined to call it nonsense, if it weren't for the fact that it's so damn beautiful.

Described as a "Reagan-era fever dream inspired by hazy childhood memories of midnight movies and Saturday morning cartoons", "Beyond the Black Rainbow" centers on The Arboria institute, where creepy Dr. Nyle keeps a young girl captive in an all white room, cut off from the rest of the world.

At the Arboria institute, medical professionals study better living through pharmaceuticals, and hail a "new age of humanity" they plan to unleash upon the world. The staff consists only of Nyle, his assistant, and as we later learn, Dr. Arboria himself, who lies drug addicted and near death in a squalid room deep in the bowels of the institute.

Of most concern to Dr. Nyle is his young patient, and her dangerous telekinetic abilities, which he somehow controls through a mysterious pyramid-like object. I'd like to tell you more about what it is and how it works, but it's information that Panos Cosmatos, the film's first time director and producer, doesn't care to share with his audience. That's the rub with "Beyond the Black Rainbow". It presents a beautiful, trippy, neon colored world filled with mystery and danger around every corner, but never deigns to let the audience in on anyone's true motives.

Long stretches of the film take place in complete or near complete silence, ala Stanley Kubrick's "2001", an inspiration the film proudly wears on its sleeve. Many of the effects draw direct influence from the LSD fueled alternative cinema movements of the 1970's. Another strong inspiration appears to be the early works of Italian horror auteur Dario Argento, particularly his sister films "Suspiria" and "Inferno". Sporting a soundtrack Goblin would be proud of and what seems like an infinite supply of different colored fluorescent lights, anyone enamored with early 80's horror stylings will find a lot to like with the look of "Beyond the Black Rainbow".

Which unfortunately, will probably be where most people's enjoyment stops. There's no doubt that Cosmatos is a director with an incredibly distinct visual style, at least when compared to modern films. He's confident to present his product as is, with no explanation whatsoever, but frankly that just won't be enough for a large portion of the horror loving audience.

And it wasn't enough for me, frankly. Especially during the few moments we see that are more grounded in a tactile reality, because that's when you see the potential that a director like this would have working with some truly grounded material.

There's one sequence that's particularly stunning, when the female patient escapes into the forest and experiences nature for what seems like the first time in her life… it's a sublime moment that Cosmatos lets linger just long enough for you to feel some type of catharsis. Some people may find this to be enough, and will truly connect with this film on a deep, emotional level. Others will walk away from the experience scratching their heads and perhaps a little cranky. The only way to tell where you'll fall is to do some real soul searching, and if appropriate, take the leap...