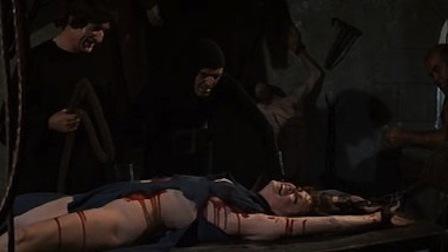 For most of Jesús Franco’s first 15 years of filmmaking he was contending with a powerful set of artistic limitations manifest most precisely in the fascist rule of Francisco Franco. While Jess, as he is more commonly known, left Spain for more habitable film production locales the specter of Franco’s rule seems to revel itself in the director’s oppositional, iconoclastic relationship with cinema censors. Credited with pioneering women-in-prison films and reshaping exploitation cinema, the director codified a different breed of heterosexually motivated exoticism that swirled around violence; exploitation at some of its purest and never apologetic. This isn’t necessarily to say that the man was a visionary of cinematic potential. Blood and boobs had been around for some time. But what Franco did bring to the screen, along with Fulci, Bava, and other sleazy cinematic raconteurs of that period, was a brazen defiance of film representation.

Though seldom mentioned as one of Franco’s notable works, The Bloody Judge is one of the most important films for a filmmaker whose career has a breadth reviling Roger Corman’s. Characteristic of many of Franco’s work is a nonsensical narrative logic, character inconsistencies, and complete disregard of tactful presentation—or for that matter taste. These are the qualities which cult horror and sleaze fans find so endearing; its age mummifying it in that intangible “it’s-so-bad-it’s-good” sarcophagus. And while we are treated to a bevy of buxom lasses licking blood off each other’s bodies while chained in a dungeon the film’s overlying message of unlawful subjugation and oppression is constant. We might say that The Bloody Judge is indicative of Franco’s attempts to outwit, criticize and challenge the censorship he so openly despised.

Christopher Lee—looking more than a little like Liberace—stars as Judge Jefferies, a high profile force in the reign of the Stuart Kings of Great Britain. When not sentencing lusty maidens to death for witchcraft Jefferies is also contending with the rebellious subversions of the Dutch House of Orange. Both conflicts combine when a young maiden named Mary attempts to plead for the life of her sister imprisoned for witchcraft. All the while Mary’s lover Harry is assisting the Orange forces in their attempts to overthrow the megalomaniacs in power. Thus begins a kaleidoscope of blind oracles, prison cat fights, sex, torture, mutilation, and a dungeon master that might be related to Marty Feldman in Young Frankenstein.

Though conspicuously billed as a typical “(b)(w)itches be tripping” type of film we are swiftly steered away from such clear notions of good and evil supernatural forces. A few very brief scenes dealing with witchcraft in the film’s opening moments beguile a more pointed critique of Judge Jefferies abuse of power. Throughout the film villainous thugs don a bright crimson “J” to signify their allegiance to the tyrannical rulers. When revealed characters cry out, “You’re a Jefferies man!” Innocents are secluded and tortured until near death all at the hands of Jefferies’ vast network of spies and minions. Subtle it ain’t but what it does is signify a stark contrast between those that live within a system of oppression and those that maintain power with strict, violent control not unlike Franco’s experience in Spain.

Let’s also call a spade a spade though. The film wallows in the complete and total objectification of women. Whether they are “wenches”, “witches”, “bitches”, or (very rarely) “ladies” the women of The Bloody Judge are just bodies. When they do take action against captors it usually is in the service of placing them in even more degrading situations leading to either rape or torture. The camera tracks across their bodies as bright, pinkish-orange blood streaks down their legs. When they are allowed to briefly avenge themselves they become monstrous in their violence, alluding to the servents of Satan they are presumed to be. The second act suffers from some serve pacing problems in which characters spend too much time discussing topics with which the film is clearly uninterested. There’s also a cavalry battle sequence that seems to be designed to heighten the sense of scope but ends up feeling messy and overlong.

To critique films like The Bloody Judge for these reasons is a bit of a paradox in that it applies certain standards of criticism to something that, frankly, doesn’t give a damn about those standards. Nor do such filmmakers consider themselves beholden to these standards. I’m not going to excuse the brazen objectification of women as exploitation just being exploitation. But what we see in The Bloody Judge is a type of filmmaking style which continually looks for the excessive before considering the reasons why the excess exists. To put another way, if Bruce the shark in Jaws stopped working, Franco probably would have some nude swimmers make out in a pool of chummed-filled water while Richard Dreyfus and Robert Shaw leered. The individual madness of the moment is just as relevant in Franco’s films. Humor and genuine discomfort flow in and out like the tides leaving only the sensation of seeing something elicit.

I don’t possess enough knowledge of Franco’s extensive career to pretend to come to any definitive conclusions on his intentions or the consistency of ideas (stylistic or narrative) that are floating around. Indeed, the man is currently credited with approximately 200 features and it is likely he directed even more films under one of his myriad pseudonyms. (If ever you are looking for a good espionage handle just look here). For a more in-depth look at his career I would have to direct you to Stephen Thrower’s piece for the Guardian and his forthcoming book. But what The Bloody Judge does demonstrate is a deliberate antagonism towards those in power incapable of confronting the true repercussions of the violence they sow. For better or worse The Bloody Judge remains one of Franco’s most politically oriented films.