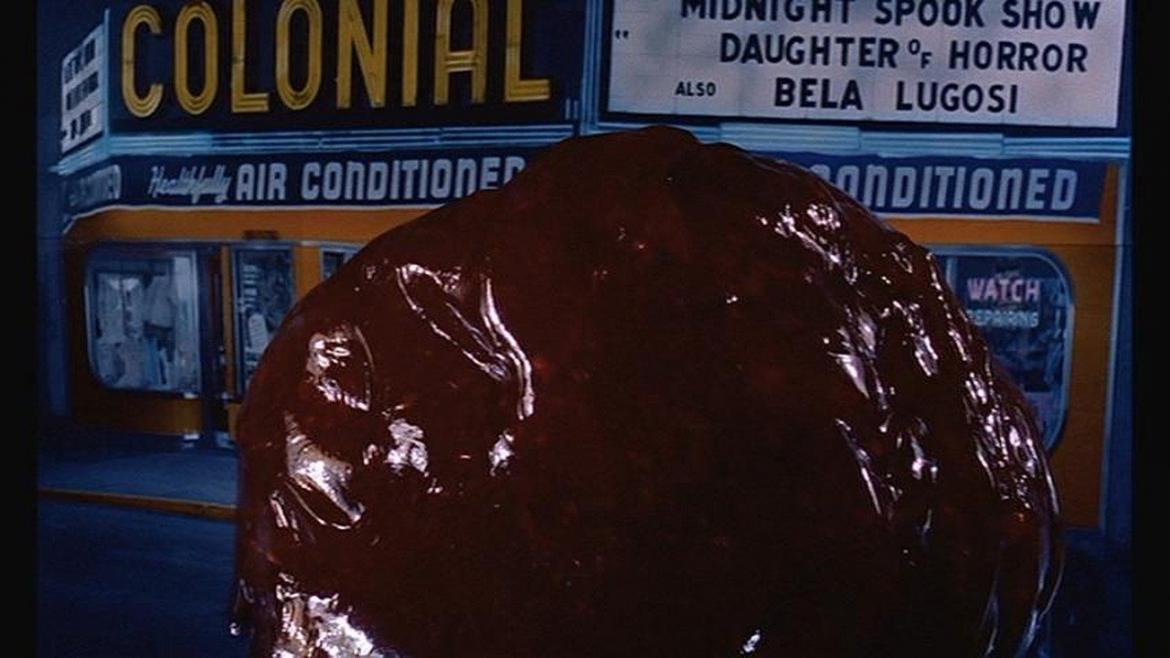 Will you like The Blob (1958)? There’s an easy way to tell. Fire up your search engine of choice and find the film’s theme song (“The Blob” by The Five Blobs) and give that a listen. If the novelty tune with its sassy sax, campy lyrics (“Beware of The Blob, it creeps and leaps and glides and slides …”), and popgun sounds isn’t an immediate disqualifier then yes, you’re likely in for a fun ninety minutes.

The Blob opens with Planet Earth’s most devil-may-care senior citizen stumbling upon a downed meteor. After poking it with a stick and unleashing a gooey substance housed within, the old guy just keeps goofing around with it until the substance latches on to his hand. Only then does he see the error of his ways and he bolts, finding himself right in the path of a car containing Steve (Steve McQueen) and his girlfriend Jane (Aneta Corsaut). The “teens” – we’ll use that term loosely – take the old guy to the town doctor, who’s understandably baffled. As everyone tries to figure out what’s going on, the substance consumes the old guy, grows larger, and heads off in search of its next meal.

At nearly 60 years old, The Blob is almost as much a thing from another world as its titular monster. The film feels very much a product of the red scare era during which it was born, even if its crew disagrees with that assessment. The blob is a monster that grows bigger and redder by consuming unsuspecting small town Americans. If that’s not symbolism, what are we even doing?

By today’s standards, the movie has its issues. The effects are cheesy, that much is a given. The story is also prone to these almost mind-numbing, rambling tangents. The worst of these occurs when Steve puts aside the otherworldly horrors he’s seen to engage in a prolonged sequence of 50s-era street race shenanigans.

In addition to looking far too old to be a high schooler – he was 27 at the time – McQueen doesn’t bring much to the role of Steve outside of some faint likeability. He spends too much time mugging for the camera, giving little indication of his future as a Hollywood icon. The rest of the cast is a mixed bag of acceptable or not great. It’s hard to tell about poor Corsaut, who’s unfortunately asked to do very little and is frequently talked around instead of to by her male co-stars.

Some will see these sticking points – and hear the cornball theme – and know they’re best served moving on to something else. For others, these things are just an accepted part of the movie’s campy, flawed charm. For them, a group this reviewer counts himself among, The Blob works as an oozing, creeping time capsule of bygone drive-in theater culture.