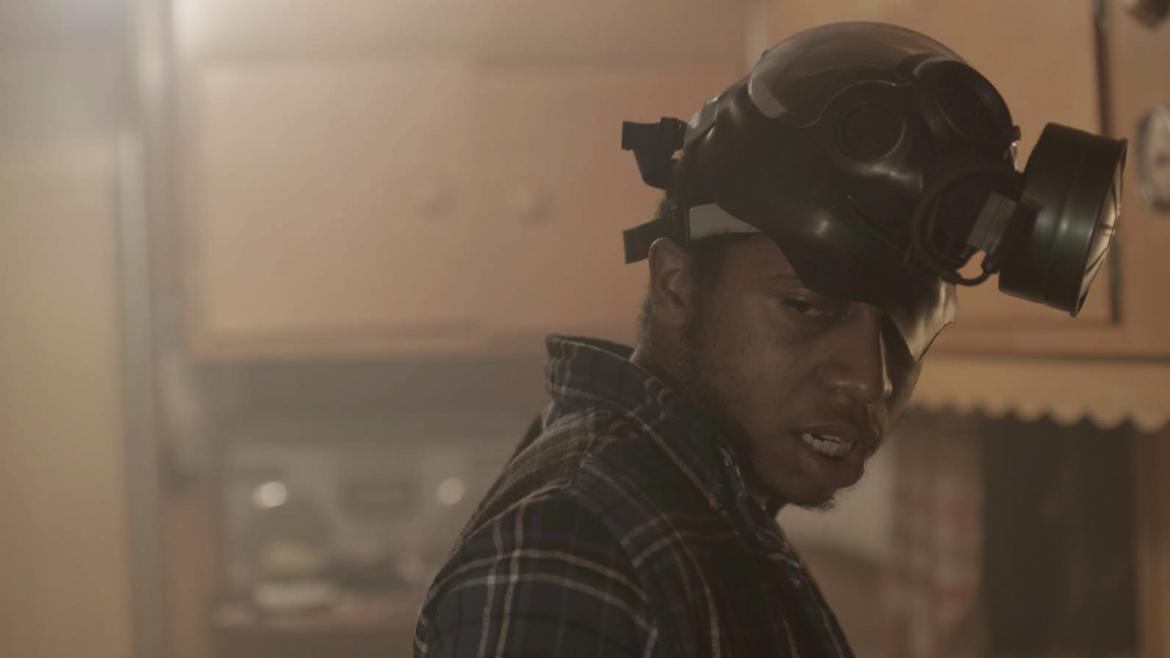 Take note, Gatorade and Doritos--essentials on the grocery list of a loner who intends to conjure the devil in the middle of the woods. So it seems anyway per Joel Potrykus' latest, The Alchemist Cookbook, which stars Ty Hickson as Sean, the aforementioned loner who has taken residence in a trailer in the woods conducting various DIY experiments. The youngster's mind seems to be fracturing as he's gone on his sabbatical in hopes of gaining wealth from mystical and evil forces.

Portykus' film isn't interested in holding the audience's hand when it comes to deciphering any of the above premise. A lot of the details are...well, in the details on screen. Sean is often seen taking pills, and is none too keen when his only link to the world he left behind, Cortez (Amari Cheatom), seemingly forgets to bring his pills on a routine trip to restock the trailer with supplies. Additionally, Sean has a metal brace on his leg and a pile of bills laying around that suggest he's fallen on hard times and therefore is seeking alternate means for support. All the while his mind slowly rots away all alone in the depths of the wilderness surrounded by household experiments and occult literature.

The Alchemist Cookbook is a slow burn if there ever was one--often focusing on Sean's mundane day-to-day activities like fishing, shoving handfuls of Doritos in his mouth, and chugging entire bottles of Gatorade. Making these tasks engaging is seemingly impossible, but Hickson's performance is stellar. The film is essentially a deep dive character study and Sean is a character of youthful curiosity, desperation, and ignorance. Hickson even injects a sense of arrogance into the character, which makes some of the last act's turns darker than they would otherwise be.

The easiest way to categorize Potrykus' film is a dark comedy with some horror undertones. It takes time for the darker, more horror centric plot details to make an appearance and even when they do they are lurking in the tone rather than on screen. Sean flirts with the idea of animal sacrifice and it's about this time in the film where some of the creepier aspects pop in and out and just as they do an air of humor still lingers.

The Alchemist Cookbook is an amalgamation of acquired tastes. The film teeters on the outskirts of categorization, but blends aspects of comedy, drama, and horror with a surprising amount of skill by Potrykus. A celebration of minimalist filmmaking, The Alchemist Cookbook captivates with a slick look and superb performance from Ty Hickson.