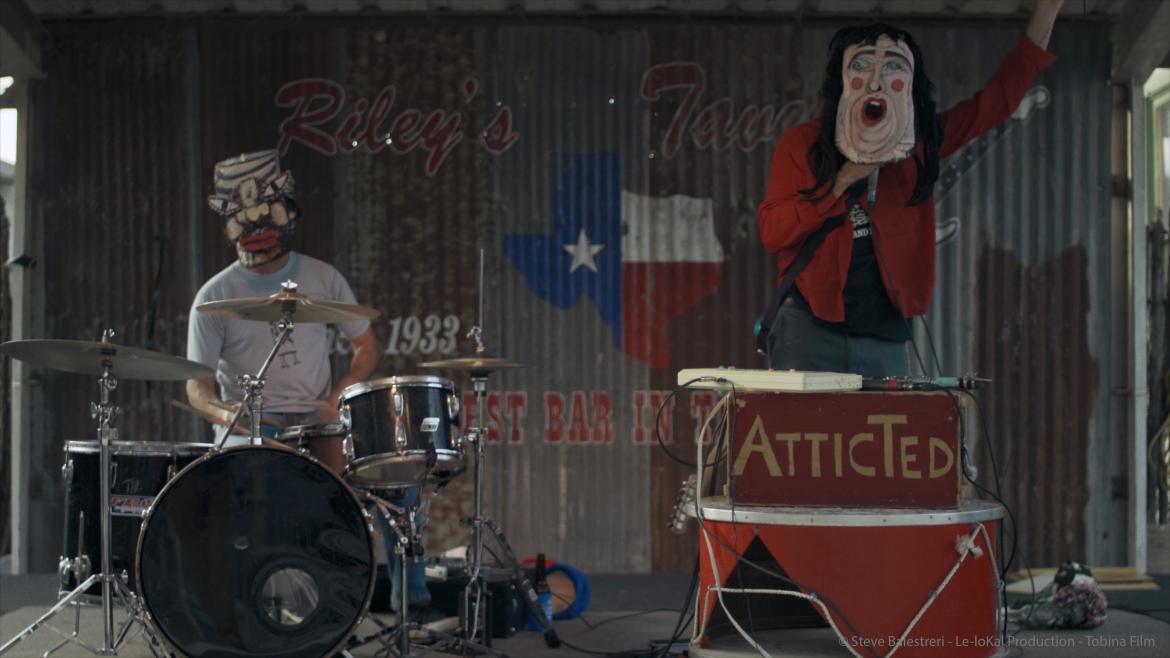 Texas drawl does not just apply to speech -- sometimes it applies to film. Texas Trip - Carnival of Ghosts (2020) takes its documentary style from From Dusk till Dawn (1996). You begin believing from the context clues and the narration card that this is a film about the history of 1960s and 1970s Texas Drive-In culture. The first ten minutes of the film, prior to the title card, all lead that way: with shots of abandoned drive-ins, clips from grindhouse and exploitation films, and then finally a concert before a drive in screen. SURPRISE! That was the moment directors Maxime Lachaud and Steve Balestreri completely switched the perspective to our real subjects -- avante garde Texas artists sort of inspired by drive-in films; and ooh wee, do we linger with those subjects.

We meet a gaggle of characters with absolutely no context -- Mother Fakhir, Attic Ted and  Virginia Black (same person playing multiple masked characters), and others whose names are never uttered that we now have to piece together. Are they in one band or many? Are they musicians, or performance artists, or ex-cons? Are they building toward the concert that we saw at the beginning or is this pure ‘day in the life’ style coverage? Ultimately, we are never introduced to any characters with graphics, or in an interview style, and anything gleaned is from the mouth of the characters themselves. Sadly, people are loath to start a sentence by saying their own name.

The lack of a consistent narrative will leave you a little bored, despite the contrast of Americana and striking imagery that is catalogued throughout. The film feels like your stoned friend in highschool telling you about his philosophy and the new band he is starting. The shots of Mother Fakhir walking with narration or creating his electronic noise music are shot a little like a skateboard video produced by Element. That said, this is clearly an interesting subculture to examine for an audience -- Mother Fakhir does body modification onstage and plays the wires hanging from his face as an instrument. Therefore, I posit that the film’s choice to employ a detached objectivity, without any interpretation, does this collection of images a disservice. I cannot recommend this documentary as entertainment, and it did not move me as a rich examination of the Texas avante garde art scene. We are left bewildered, emotionally disconnected, and forced to interrogate why we spent time trying to invest in the piece; and maybe that is what these artists wanted all along.