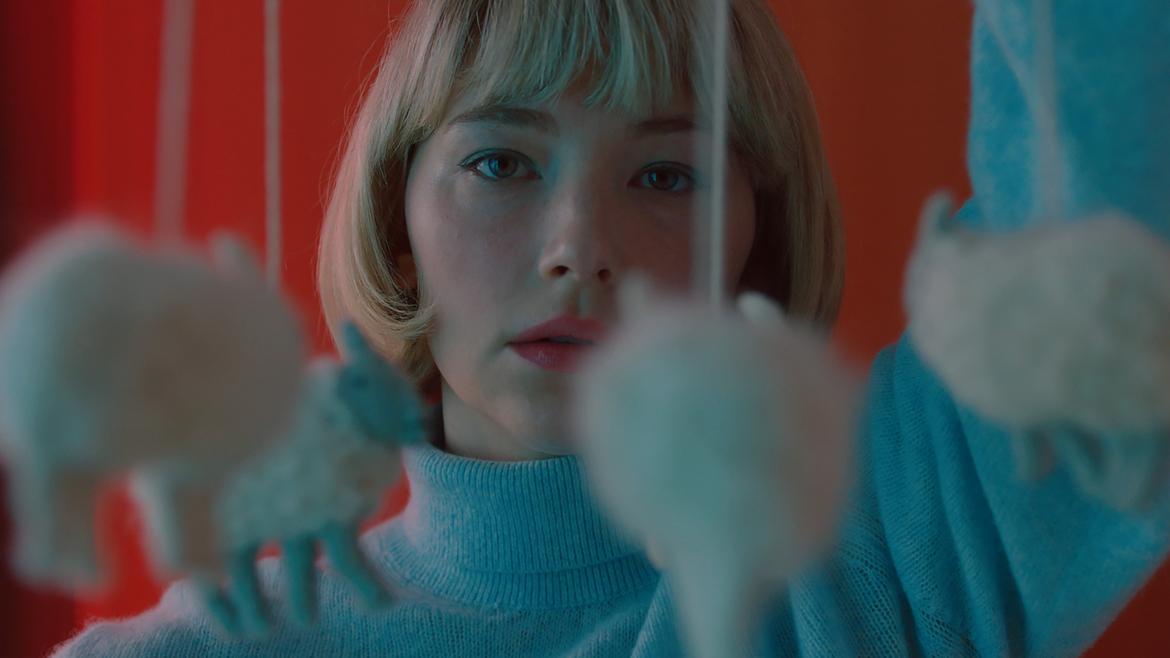 Hunter (Haley Bennett) lives her entire life for others. She dresses and cooks three course meals for her not so subtly named husband Richie (Austin Stowell). She decorates the extravagant home that her in-laws bought for she and Richie, and keeps it spotless so that she can be ready to entertain his friends and business partners. She is constantly surrounded by reminders of her role - look pretty and stay quiet. In a scene about halfway through the film her husband brings a number of business associates home to take a dip in the couple’s pool. One of them walks into the home and asks her for a hug. When Hunter asks why, he responds, “Because I’m not drunk enough to ask for a kiss.” She initially protests, telling him that she’s Richie’s wife, but he waves it off and she agrees to hug him. It isn’t until she discovers that she is pregnant that Hunter realizes just how little control she has in her life. In a heartbreaking scene, she stares into the camera, her eyes welling with tears and fear as Richie announces joyfully to his mother over the phone, “We’re pregnant!”

As the film’s title alludes to, Swallow is about Hunter’s sudden compulsion to swallow non-food that comes on almost immediately after she discovers that she is carrying Richie’s baby. It starts when she reads a passage in a book that suggests that she can find joy by striving to do something new every day. She immediately puts the book down, walks to a small table, and considers a glass marble, before swallowing it. As the objects that she consumes become more dangerous and Richie and his parents become aware of her new habit, they tighten their control over her.

Written and directed by Carlo Mirabella-Davis, Swallow is a visually arresting movie. The use of color is playful and bright, with the saturation turned up to one hundred. The style of Hunter’s clothing and the home decor have a very retro feel that make the movie feel a little Stepford Wives in the best way. Everything about Hunter’s life looks picture perfect, which makes her behavior even more startling. In one especially striking sequence, Hunter has just passed a tack that she swallowed and we see bright crimson blood on the toilet seat. She kneels on the floor in front of the toilet, wearing a flawless satin nightgown and furiously scrubs the mess.

The film establishes early on that Richie is often preoccupied, leaving Hunter to her own devices. No matter how hard she works to prepare him stunning meals, he texts through them. When she excitedly tells him about picking the drapes for a room, he belittles her, telling her it sounds hipster. She stays home all day to keep the home perfect for him, and yet he criticizes her for being lazy and implies that her not working is her choice, though we can all be sure it likely wasn’t.

Unfortunately, much like Hunter’s marriage, this movie turns out to be less picture perfect than impressions would lead one to believe. Hunter reveals in a session with her therapist that her mother became pregnant with her after being raped by a man who followed her home from a bar. She pulls a news clipping from her purse, featuring a photograph of her mother’s rapist and her therapist struggles to hide her horror. In the film’s climax, Hunter has run away and is looking for somewhere to go. Her mother doesn’t have room for her, and in her desperation she goes to the home of the man who raped her mother. An emotional confrontation ensues, and Hunter breaks down, at which point, this man tries to comfort her, telling her that it isn’t her fault. This is where the movie fully breaks down. When Hunter seeks a medical abortion in the final sequence, what is meant to feel triumphant feels hollow. Here too, Hunter needed someone else to give her permission. She needed this man to free her. When we watch her clean up a bloody toilet for a second and final time, I was left feeling more indignant than cathartic.

Swallow has some interesting things to say regarding economic and emotional power dynamics in a crossclass realtionship. Haley Bennett’s performance as Hunter is heart-rending and powerful and every scene is beautiful to look at. Unfortunately, the absolute bungling of the final arc makes it all just a little hard to swallow.