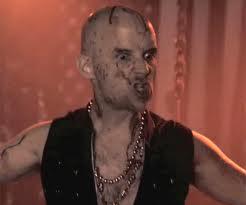 Vampire horror-comedy musical. Sight unseen, that description is enough to make me want to punch any movie in the face. It sounds like a $10,000 Pyramid clue with the answer “Things that make a terrible horror movie”. Now throw in a series of cameos from respectable musicians who really should know better. But wait, it gets worse. Give that train wreck of questionable filmmaking decisions the provocative title of “Suck”, which lofts an incredibly tempting softball at lazy, pun-prone film reviewers. Then, what the hell, make it Canadian. This unholy concoction should, by all indications, be just terrible. That “Suck” doesn’t, in fact, um… lead to an unenjoyable experience… is a minor miracle in itself. Despite my best efforts to hate it, it’s actually a pretty fun little flick.

“Suck” tells the tale of a struggling band called “The Winners”, who live up to the irony built into their name. Their manager (Dave Foley in full on sleazebag mode) is ready to give up on them as a bunch of never-beens when they unexpectedly hit on a career-revitalizing move: on the cusp of a tour across Canada and America, unbeknownst to the rest of the band, their bass player is turned into a sexy vampire. All of a sudden they, or at least the bass player Jennifer, start entrancing crowds. The Winners don’t quite know what to make of their newfound success (or their bassist’s sudden aversion to sunlight) but as long as they keep attracting new fans they aren’t inclined to ask too many questions. That is, until they walk in on Jennifer munching down on the forearm of the lead singer of another band. Then they have to make a decision: rock and roll fame coupled with eternal life/damnation or giving up the dream and getting a real job.

The musical aspect of the film works for musical haters like me because it isn’t shoehorned in. Instead of having characters spontaneously burst into song to express how they’re feeling, for the most part the music comes naturally in the form of live gigs or music videos. The rock and roll thread is bolstered by plethora of cameos from musicians like Iggy Pop, Henry Rollins, Alice Cooper and perhaps inevitably for a Canadian film, Alex Lifeson from Rush. Even Moby shows up and tweaks his PETA-friendly vegan images as the G.G. Allin-esque lead singer of a band called the Secretaries of Steak, whose fans show their appreciation by pelting the opening band with raw meat. Throw in an over-the-top performance by Malcolm MacDowell as a vampire hunter haunted by his past, complete with a flashback sequence featuring 70s-era MacDowell created through creative editing, and you’ve got an impressive amount of star power for a fairly low-budget genre film.

If the Monkees had ever decided to make a vampire movie, it would probably be pretty close to “Suck”. The movie is imbued with a sense of fun and playfulness that makes it an easy, likable watch. From a vampire sucking a victim dry with a straw to the stop-motion scenes of the tour van travelling between cities to the occasional visual nod to iconic album covers, this is an unabashedly goofy movie that thankfully never goes too far into the stupid joke territory that sinks so many other horror comedies. Are some of the jokes stupid? Sure, but the good kind of stupid – the kind made by smart people.

With bigger hair and more questionable fashion sense, “Suck” could probably pass for something you’d pick up at your local video store back in the golden age of high concept/low budget comedies, that near-mythological decade known as the 80s. It’s good-natured, silly fun that could even cause a curmudgeon like me to crack a smile. In fact, I wouldn’t be surprised if “Suck” goes on to become a minor cult classic amongst people who would consider a double feature of “House II: The Second Story” and “My Best Friend is a Vampire” as a Saturday night well-spent. If that sounds like you, (and let’s face it, that describes the vast majority of the readers of this site, present company included) seek help. Since that’s clearly not going to happen, call over some friends, pop open some brews and settle in for a evening full of “Suck”.