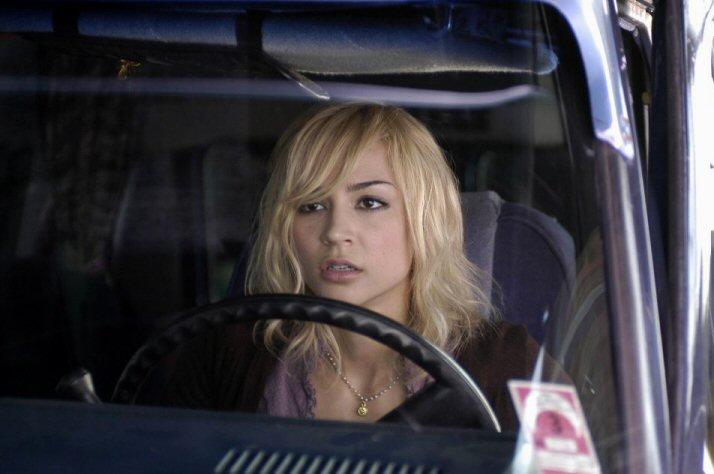 On one hand, this a well-worn trope that can sometimes get used pretty effectively. “The Ring” is a pretty great example of this, as are some of the other more worthy J-horror remakes. As a plot element, it hits the right psychological buttons – horror is about subversion, about removing safety from a safe world, and making every random thing in your house a potential murderer serves that end. There's a haunted hairbrush, and when you brush your hair with it, it kills you.

“Stay Alive” tries very, very hard to be one of the better examples of the 'haunted object' film, but it ends up being an aggravating, half-assed mess of “My Soul To Take” proportions.

In “Stay Alive,” there is a videogame (that's haunted), and when you play it, you die. Specifically, when you die in the game, you die in real life. The filmmakers try to curry favor with gamers via some rushed name-dropping during the exposition, but it feels like the writers are writing what their conception of gamers are. Remember how the hacking in “Hackers” is nothing like computer hacking in the real world? If you're a gamer and you watch this movie, you should prepare yourself for lots of “hack the planet” moments. These hardcore gamers are universally attractive and gender-diverse (and also one of them is Frankie Muniz, who is at his most hateable here). The gang starts playing “Stay Alive,” a game that isn't commercially available and was found under mysterious circumstances.

At least people start dying soon, right? The arterial spray, exploding body parts and severed limbs will get you through the rest of the movie, right? Wrong! Because it's PG-13, “Stay Alive” is an almost bloodless affair in the worst way. Instead of showing you a satisfying kill, the editor waits until the last possible second and then cuts away.

There's an economy to a major-release mainstream horror movie. A good horror movie builds tension with jump scares, an encroaching sense of dread, a chase or something similar. In order to keep the audience engaged, it releases that tension in two ways – humor and murder, and "Stay Alive" doesn't do either of them satisfactorily.

Let me tell you about the villain, too. The ghost of Countess Elizabeth Bathory. A key figure in vampire lore, the real-life Bathory bathed in the blood of virgin girls because she believed it kept her from aging. That's right – the big bad in a movie about a killer video game is a deranged Hungarian countess who died in 1614. That's far from the only implausible leap, either – we are asked to believe that Bathory fled Hungary before her death and went to Louisiana (which wasn't settled by European colonists until 1699) and lived in a sprawling plantation house where she learned to make videogames that murder people. Gang, I suspend disbelief for a lot of stuff, but this is a bridge too far. Maybe I should make some allowances, though, since this is a film whose idea of pithy dialogue is “People who say size doesn’t matter have never played a third-person shooter.”

Another major problem is that the mythology the film establishes – die in the game, die in real life – is fluid. There are people who are killed by the ghost who didn't die in the game first, for instance. The most absurd development is when the game starts having a broader impact on the real world. A weapon gets dropped in the game, and one of the real world characters finds that weapon on the ground in front of him. If you did not just groan audibly, go ahead and re-read that, I'll wait.

Like a lot of cinematic garbage, there's an interesting concept at the core of “Stay Alive.” Unfortunately, this a movie designed to pander – to gamers, to the hot horror trope of its moment, to tween audiences – and it doesn't stop pandering long enough to figure out things like internal consistency or entertainment. Never watch this.