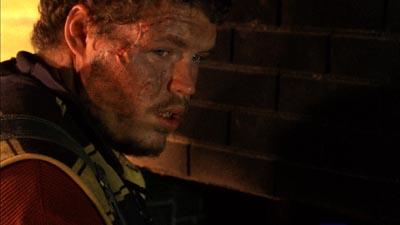 Maybe you can’t judge a book by its cover but I’ve got a pretty good rule of thumb for identifying a stinker of a horror movie. If the title includes a possessive with the director’s name in it, more than likely you’ve got a flick no one in their right mind should want their name on. Take John Carpenter – his career can be divided into two periods: when he made some of the greatest genre movies of all time and when he made movies that began with “John Carpenter’s…”. It applies equally if you’re Wes Craven, Russell Mulcahy or Cameron Romero.

Wait a minute – who the hell is Cameron Romero and how does a first time director get his name above the title? If the last name isn’t a big enough hint, maybe the prominently featured blurb from George Romero on the DVD cover will give it away. Yep, this is George’s son and if we compare it to his old man’s films, “Staunton Hill” falls much closer to the trend-chasing, borefest that was “Diary of the Dead” than any of his Pop’s trailblazing classics.

Actually, calling “Staunton Hill” trend-chasing might be going too easy on it. This film owes so much to the “Texas Chainsaw Massacre” that I was waiting for Leatherface to pop up mid-movie with a cease and desist order. And if you think the idea of a “TCM” clone doesn’t sound too awful, I should point out that it’s not the original series “Staunton Hill” apes, it’s the Platinum Dunes reboot – the prequel to be exact. That’s right. This is a rip-off of a prequel of a reboot of a franchise that took four movies to go from sparse docudrama to Matthew McConaughey with a robot leg. Much like a photocopy of a photocopy, every generation degrades a little more until you end up with something cruddy and incomprehensible.

The film takes place in a 1969 where hippies shopped at Old Navy, had frat-boy haircuts and used outdated slang like “gnarly” and only redneck gas station attendants had long hair. A Scooby Gang of two couples and a girl are hitchhiking their way to some vague political “rallies” in Washington DC because people in the 60s protested stuff, right? In rural Virginia they meet a sympathetic young guy with a truck who offers to give them a ride. See what they did there? Instead of them picking up a hitchhiker, it was the kids who got a ride from a random guy. It’s like “Texas Chainsaw Massacre” on opposite day.

The ride doesn’t last long, though, because pretty soon the random guy’s truck breaks down and they’re forced to spend the night in what they assume is a deserted barn, because they apparently don’t notice the house and other buildings on the grounds, the truck parked nearby, the live electric fence and the hog pen right next to the barn. After an early morning incident involving the kids, a shovel, and the mentally handicapped son of the family that owns the barn, the kids make some new friends as the matriarch of the family invites them to have a freshly killed and grilled breakfast before they attempt to repair and steal her truck.

The family consists of a disfigured, childlike hulk of a son, the not disfigured but still hulking mother and a crazy comic relief grandmother in a homemade motorized wheelchair. There’s also a mysterious older son who is only hinted at and is almost certainly not going to show up at the end in some kind of obvious twist that is also stolen from “TCM” so don’t be expecting that to happen.

As one of the characters flatly observes just before getting his foot blown off, “There’s something wrong with these people, they’re evil or something”. It a well known fact that most of the economy of the rural United States is based on “killin’ big city types what come around these parts” and this family is no exception. In this case, the motive for killing doesn’t involve the secret family chili recipe or the manufacture of home-made leather outsider art but instead has to do with the little-known fact that medical techniques were far more advanced in the backwoods of 1969 Virginia than they are today in our advanced multi-million dollar hospitals.

About halfway through “Staunton Hill” I started checking the countdown timer on the DVD and continued to do so every 5-10 minutes until it was over. The worst kind of bad movie is a boring one and this one moves slower and has less personality than the undead in one of Cameron’s dad’s movies. Visually, it adopts the slick, gritty, “100s of shades of beige” look that has become the house style of Platinum Dunes and the “Saw” series which, while overused, still looks okay, especially if you have some sort of dust and rusty pipe fetish.

There’s some gore during the obligatory torture scenes but nothing original or particularly cringe-worthy for anyone who’s seen any of the movies “Staunton Hill” is ripping off. In fact, the centerpiece torture scene borders on comical because the person is having something horrible and no doubt painful done to her but instead of screaming bloody murder she only lightly whimpers and cries like she’s getting a wedgie instead of grievous bodily harm.

If there’s any good to be found in this turd of a movie, it’s the performance of Kathy Lamkin who, incidentally, was directly poached from the Platinum Dunes “TCM” series in which she played the corpulent “tea lady”. Lamkin can go from sweet to homicidal in an instant and she gives the hackneyed role of the killer fat mama a natural charisma which classes up the movie whenever she’s in a scene. Sadly, her good performance only makes the poor acting and bad writing that surround her stand out even more.

Maybe it’s because we fans tend to get attached to our directors, but there is a history of nepotism gone bad in the horror movie business. Now Cameron Romero can join the esteemed ranks of Asia Argento, Lamberto Bava, and Jennifer Lynch as further proof that having a marketable last name doesn’t necessarily mean you can make a decent movie. It will, however, get you a valuable blurb and your name above the title.