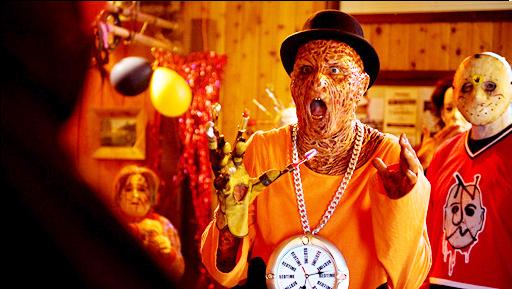 Horror movie satires are nothing new; In a post "Scary Movie" world, we know full well what to expect from such a movie. Bad puns, endless references to whatever genre they are lampooning, and lots and lots of sex jokes. On the surface, Bo Zenga's "Stan Helsing" is no different than its predecessors, but after they get over the toilet humor, there actually is a bit more to sink your teeth into.

The setup is a simple one; Stan Helsing is your typical stoner kid with no ambitions other than to party hearty. On the night of Halloween, he's ready to do just that along with his pals except for one thing; he must drop off video tapes to his boss's grandmother in the nearby subdivision of Story Night Estates. Unknown to the band of party goers, Stormy Night Estates happens to be the location of what was formerly biggest horror movie studio in history, which mysteriously burnt to the ground. Now on this Halloween night, Stan and his friends will discover that this quiet neighborhood is haunted by the biggest movie monsters from the studio's past.

The first half this film is down right groan-worthy, just as you would expect from the screen writer who penned such classics as "Soul Plane". There is absolutely nothing to go on here aside from ham-handed attempts to make the viewer realize that they are making fun of a horror movie. From horribly realized versions of classic characters such as Pinhead with a skull full of hypodermic needles, to a psycho truck driver with a Gucci bag for a mask called Pleatherface, the film basically sets out to insult you with bad jokes. There is little effort involved in humor or story aside form a few sight gags and weed jokes. As we meet the rest of Stan's friends however, the humor does improve to some extent.

The gang of merry revelers that join Stan on his trip to Stormy Night Estates is really the only saving grace to the film. Joining him are his ex-girlfriend played by Diora Baird, his best friend Teddy played by Saturday Night Live's Keenan Thompson, and Teddy's date for the evening Desi Lydic who plays your typical trampy masseuse/hooker. It's in this band of four characters that any redemption is found. If you can manage to ignore the plethora of bad jokes, you will find some actually funny dialog that will entertain. Its not much mind you, but it is far better than the first forty five minutes that we sat through to this point.

There is a point in this film, toward the fifty minute mark, where it turns the corner and actually becomes entertaining in story, dialog and jokes. At this point as well, you start to feel more in tune with the characters rather than just watching people stumble through a script. Perhaps it was a change in the shooting schedule or perhaps the cast just became more comfortable in their roles; whichever it was resulted in a better film to watch. Perhaps it's the appearance of Leslie Nielsen in drag as an old waitress. He is the king of this sub-genre after all!

"Stan Helsing" is far from a good movie, but with an open mind it can become an enjoyable watch. For a late night cable viewing, it will fit the bill and should keep you entertained. This is good fare for a beer bash and other type social situations as the jokes are catered directly to that state of non-soberness.