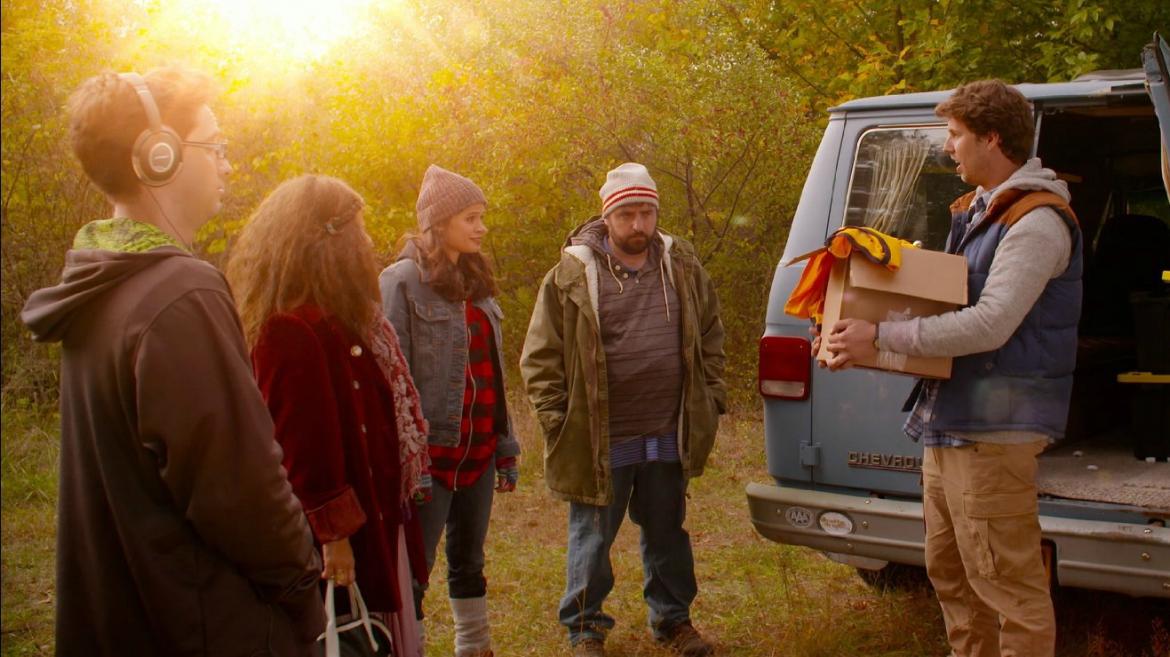 To put it in the most genre-appropriate terms, Ghost Team is a supernaturally-unfunny horror comedy. It stars proven comedic talents like Justin Long, Amy Sedaris, and John Heder. Its plot centers on the inherently spoof-able phenomenon of the paranormal investigator as a reality television star. All that considered, you’d think Ghost Team would capture at least a handful of laughs during its 85 minutes, but no. There’s nary evidence of a chuckle or an extended smirk to be found.

This droll affair casts Heder as Louis, a guy who isn’t satisfied with his life as the owner of a print and copy store. Not employee of. Not manager of. He’s the owner. Louis escapes the tedium of life as a small business tycoon by watching ghost hunter television shows with his clinically depressed best friend, Stan (David Krumholtz). FYI on Stan, his fiancée ditched him right before their wedding, which he attributes to her having been abducted by aliens. Louis sees an opportunity to do something more with his life – more than own his own business at a relatively young age – when a customer asks him to make a bunch of “No Trespassing” signs. It seems the customer owns an old farm that he believes to be haunted. Louis throws together just the most raggedy of rag tag teams to investigate the claims, unbeknownst to the customer, that is.

Ghost Team is competently acted and it’s more than competently directed. Second time feature director Oliver Irving works some magic here. His film looks consistently excellent and is visually interesting throughout, even if the story isn’t. Irving shares a “Story By” credit, but the film’s screenplay is attributed solely to Peter Warren and as such so can most of its shortcomings.

The film’s D.O.A. sense of humor is problem enough, but, its overall story isn’t any better. It meanders along through two acts of very dull team-building and mostly-dull supernatural studies at the farm. Things pick up momentarily when team members start disappearing at the hands of some unseen threat. However, the twist this is meant to go along with becomes painfully apparent long before anyone involved in the production of the film could possibly have intended. When the movie finally springs the twist, it’s just as Scooby Doo-inspired as viewers had been led to fear.

If you’re a Justin Long completest or you’re just dying to see TV’s Ghost Hunters playing close approximations of themselves in a horror comedy with a busted funny bone, then you are the perfect audience for Ghost Team. For the rest of us, this paranormal activity is best left unexplained and uninvestigated.