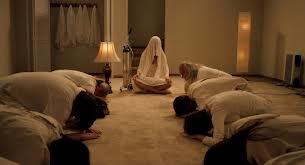 Sound of My Voice (Movie Review)

Making a film is a lot like leading a cult. It really doesn’t matter how plausible your story is, it’s how you tell it. With enough misdirection and slight of hand, plus a healthy dose of charisma, people who are willing to believe will line up to get on board. In the arthouse sci fi thriller “Sound of My Voice Brit Marling (who also wrote the film) plays Maggie, a cult leader who claims to

be a refugee from a civil war-torn future. She spends most of her time tethered to an oxygen tank in the basement of the suburban tract house that serves as the cult’s headquarters because she claims to be allergic to the impurities and toxins in our present-day atmosphere. Sometimes she asks her followers to do strange things like eat worms and perform elaborate secret handshakes, but she never comes across as overtly menacing. It’s hard to tell if she’s a crackpot, a charlatan or an actual time-travelling messiah, a revelation the film also carefully keeps ambiguous.

In one of the film’s best scenes, some of Maggie’s followers begin quizzing her for details about the future and they ask what the music is like. Maggie offers to sing a song that was a hit shortly before she travelled back in time and proceeds to sing “Dreams” by the Cranberries. When one of her followers awkwardly points out that she just sang a song from the 90s, she angrily claims that she’s never even heard the original and only knows the song because of a cover version from 2054. Viewers, not to mention the followers who haven’t entirely finished their Kool-Aid, are left to wonder about the many different interpretations of what just happened. Is this evidence that Maggie really is just a charismatic mental case? Was it a colossal blunder by a grifter who let her guard drop? Was it an incredibly savvy big lie told by a con artist who understood that the most unlikely story can sometimes be the most believable? Or was it the truth, as strange as it can be?

The film is told from the point of view of a documentary filmmaker Peter and his girlfriend Lorna, an ex-party girl. The two have spent months building up to infiltrating the cult, but once they are in, Peter begins to fall under Maggie’s spell and finds himself wondering if she might not be the real deal. In the third act, the story careens off into an ultra-low budget riff on “The Terminator” when Maggie asks the Peter to kidnap an eight-year-old girl who Maggie claims is her mother. Meanwhile, Lorna is approached by a woman claiming to be from the Justice Department who says that Maggie is a dangerous criminal.

In case you’re wondering, all the ambiguity in that synopsis is not a concerted effort to avoid spoilers, but rather a fairly straightforward relaying of how the movie plays out. Throughout the film there are narrative cul de sacs and unexplained behavior by characters that seems to be significant but never get elaborated on enough to let us know what’s really going on. There’s a particularly big monkey wrench of a twist in the last few minutes that is equally capable of infuriating viewers who demand definitive answers as it is of enthralling viewers who like to speculate about potential interpretations long after the film has ended. Your mileage may vary.

Ultimately, “Sound of My Voice” feels a bit thin and incomplete. It has some great moments and some fine acting but the movie traffics so much in ambiguity that it doesn’t really add up to much more than the sum of its parts. What’s most troubling is that it’s not really clear that the filmmakers even know the truth about Maggie, which makes the twisty shenanigans feel somewhat pointless. Deliberate uncertainty can occasionally be effective if it’s in service of making a greater point, but more often than not it’s just a lazy way to build mystery and make a story seem more profound than it really is. To be fair, writer/director Zal Batmanglij has announced that he envisions “Sound of My Voice” as the first part of a trilogy, so maybe there is a definitive answer beneath all the vagueness. If that’s the case, this film could just be the prologue to something much grander. Until then, it’s just a mostly entertaining, above-average headscratcher that introduces some promising new talent to the film world.