My Son, My Son, What Have Ye Done (Movie Review) 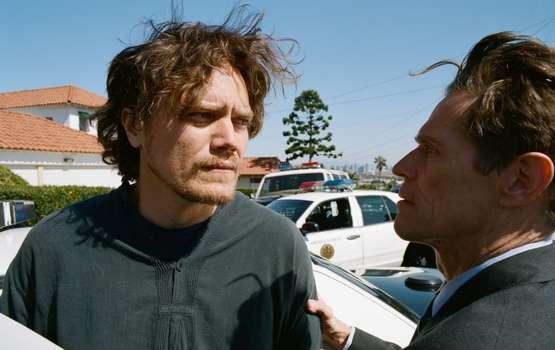 That guy, that guy, what he did do was kill his mother. With a sword. That’s not a spoiler, though, because the film opens with homicide detective Willem Dafoe storming the crime scene not noticing the matricidal perp calmly walking away holding a mug of coffee with “Razzle Dazzle” written in big, gold letters on the side. It seems the killer, played with mad-eyes and detachment by Michael Shannon, was in rehearsals to play a mother-killer in a production of a Greek tragedy and got a little too close to his role. But that’s getting ahead of the story. Shannon escapes the crime scene and takes two hostages in a nearby house, leaving Dafoe to piece together what happened while dealing with the current hostage situation.

The bulk of the film takes the form of flashbacks told by Shannon’s friends and neighbors. Shannon’s girlfriend, played by Chloe Sevigny in her signature role as a girl with appallingly bad taste in men, explains that her boyfriend’s recent turn for the weird came after a rafting trip to Peru where everyone died except for Shannon because the voice of God warned him at the last minute not to get in the boat. The police also talk to Udo Kier, the director of the play Shannon was rehearsing for. Kier tells the cops of a trip they took to visit Shannon’s eccentric, emu-rancher uncle, played by Brad Dourif in extra-crusty mode, in which they borrowed an antique sabre that later became the murder weapon with the intentions to use it as a prop in the play. If the idea of a movie where Brad Dourif tells Udo Kier a story about raising and eating a “behemoth” chicken, forty times the size of a regular chicken, sounds at all like something you’d enjoy… well, here you go.

Really, a glance at the cast and crew of this movie is all you need to have a good idea of whether you would enjoy it or not. In addition to the cult stars listed above, this is a Werner Herzog movie, produced by David Lynch. In case you were wondering, yes, there is an inexplicable midget. Granted this is Herzog and Lynch with the weirdness turned down slightly and working within the confines of a plot that in other hands could have been a downright conventional hostage procedural, but there is enough film-making shenanigans on display to annoy people who get annoyed by that sort of thing and to delight people who are delighted by that sort of thing.

Flamingos, or “eagles in drag” as they are referred to here, figure heavily into the plot and there are a few scenes that end in an extended fake freeze frame reminiscent of the credit sequences of the old “Police Squad!” show, but the weirdness never takes center stage and the whole shebang remains fairly accessible for viewers who don’t usually go for surrealism in their movies. “My Son, My Son, What Have Ye Done” could work equally well as a stepping stone for someone who got their first taste of Herzog with “Bad Lieutenant: Port of Call New Orleans” and wants to explore his narrative films without jumping full bore into the arthouse, or for someone who is interested in “Twin Peaks” but isn’t ready to commit to two networks seasons-worth of the weirdest television the 80s had to offer.

“My Son” doesn’t quite live up to the cult movie all-star supergroup jam its credits seem to promise but it is a perfectly entertaining flick that isn’t afraid to defy all conventions. If for no other reason it’s worth seeing for its stellar performances, particularly Brad Dourif’s ravings against Greek plays (and Greeks in general, for that matter) and for Michael Shannon’s unnerving portrayal of an unhinged mama’s boy in the Anthony Perkins mold. This movie basically self-selects its audience. If you think you might like it, there’s a good chance you will. If you don’t have much patience for the arthouse/grindhouse style Herzog and Lynch pioneered, then ye probably shouldn’t bother.

Movies Like My Son, My Son, What Have Ye Done