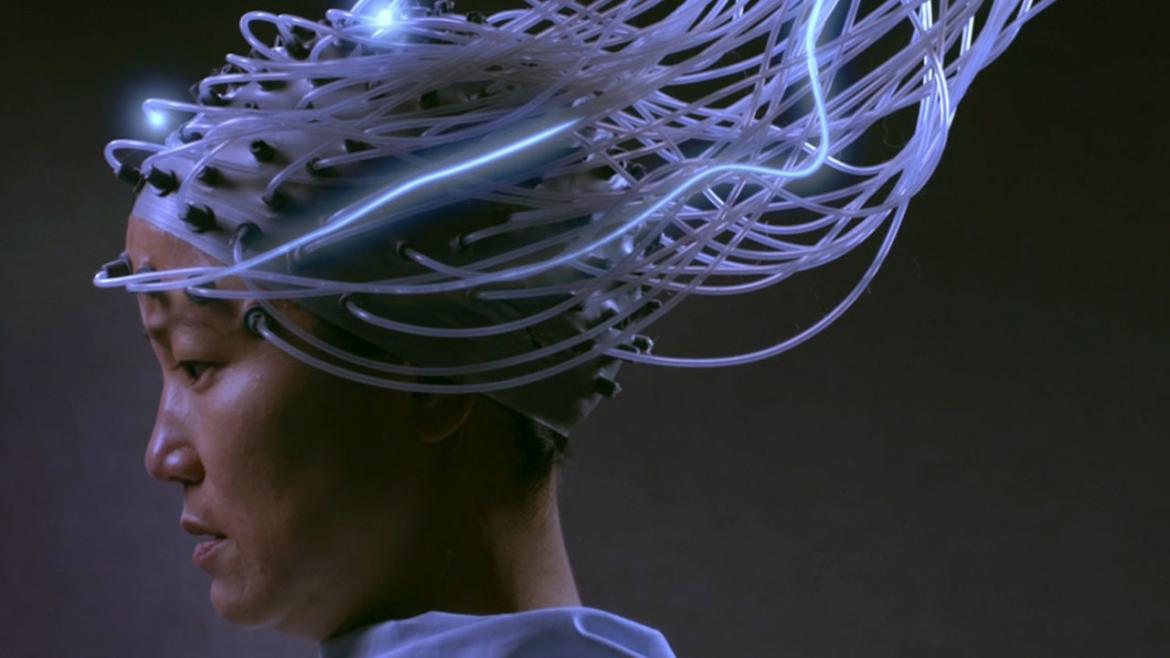 In the semi-distant future, Gwen Koh (the exceptional Jacqueline Kim, also a co-screenwriter) is a working mother whose ambiguous position as the “Head of the Center for Advanced Health and Living” is not enough to get her daughter Jules into an elite academy and out of near-poverty (their accommodations seem sufficiently posh, but we learn that they’re just one lost paycheck from running out of water). Gwen appears to be an influential executive, but she’s essentially an underpaid actress--in Gwen’s world, like ours, the public is more willing to buy into an image of a powerful woman rather than support a system that truly empowers. Early on, Gwen is informed that she’s too old, and too removed from the “universal” standard (presumably, white) to matter to an audience greedy for out-of-reach ideals.

After several leads fail to pay off, Gwen is given an offer she literally cannot refuse: implant her mind into the body of a younger, more European surrogate (Freya Adams). She’ll regain her place as the Center’s spokeswoman and, most significantly, it's the only way she’ll have the money to pay for her brilliant daughter (Samantha Kim) to attend a good school. In addition to some major moral concerns, there are personal risks: “the technology’s not there yet,” her boss Fisher (James Urbaniak) informs her, “It’s not as simple as pouring your consciousness out of a jar into another jar.” After Gwen moves into her new body, he says, there will be pain, hourly injections for years, and she’ll be unable to focus for quite some time.

This being a science fiction thriller, there are a few other caveats. Of course she accepts.

As a piece of filmmaking, Advantageous is a little unsteady on its feet. It’s most similar to a well made TV miniseries (no surprise, it was adapted from an episode of Futurestates). The unusual world building details, like surveillance drones and what are possibly regular terrorist attacks, are kept to the background; the viewer is forced to find them as normal as the characters do. The screenplay is equally understated--when Gwen spits critically that she doesn’t want her daughter to become a woman desperate to be what she’s not, writers Kim and Jennifer Phang (who also directed) resist the urge to bonk the audience on the head with a follow-up line like, “Like me!” In fact, a lot of the story explores emotional territory similar to a filmmaker like Miranda July--where a less interesting writer would have tacked on a subplot about corporate conspiracy or A.I., Kim and Phang instead reveal details about Gwen’s betrayal of her sister (Jennifer Ikeda). Advantageous avoids cheap thrills or schlock, and ups the ante for the movie’s conclusion.

“The technology’s not there yet”-- let’s revisit Fisher’s warning. The film does, shrewdly, when “Gwen 2.0” meets again with Fisher, and the audience learns what the original Gwen had already discovered: that she would not, despite the Center’s claims, have her life extended when she was transferred into a new body. Though the surrogate was given a fair share of her memories, Gwen was killed during the procedure, the only way she could ensure even the possibility of a good life for her daughter. Fisher begs the surrogate to keep the secret from Jules (less for her sake than for the PR; sales are through the roof) but she caves and confirms for Jules what the girl has long suspected. Her mother is dead and she is living with a brainwashed stranger, herself a bizarre victim whose past is lost and whose sense of self permanently annihilated. In the film’s final scenes, the pair try to make sense of a future they have no choice but to share together, all the while maintaining the lie for Gwen’s sister and brother-in-law (Ken Jeong), who have decided too late to welcome “Gwen” back into the family.

The final act is gripping and wrenching, and while Advantageous isn’t quite a spectacle akin to Upstream Color or Under the Skin, it’s a marvel all its own, thanks especially to an intelligent script and a remarkable cast (Jacqueline Kim, Samantha Kim, Adams, and Ikeda). High concept movies such as this one too often distract with a catalog of self-important themes, but in Advantageous, you’ll be too swept up in its portrait of lives broken by impossible choices to write a thesis.