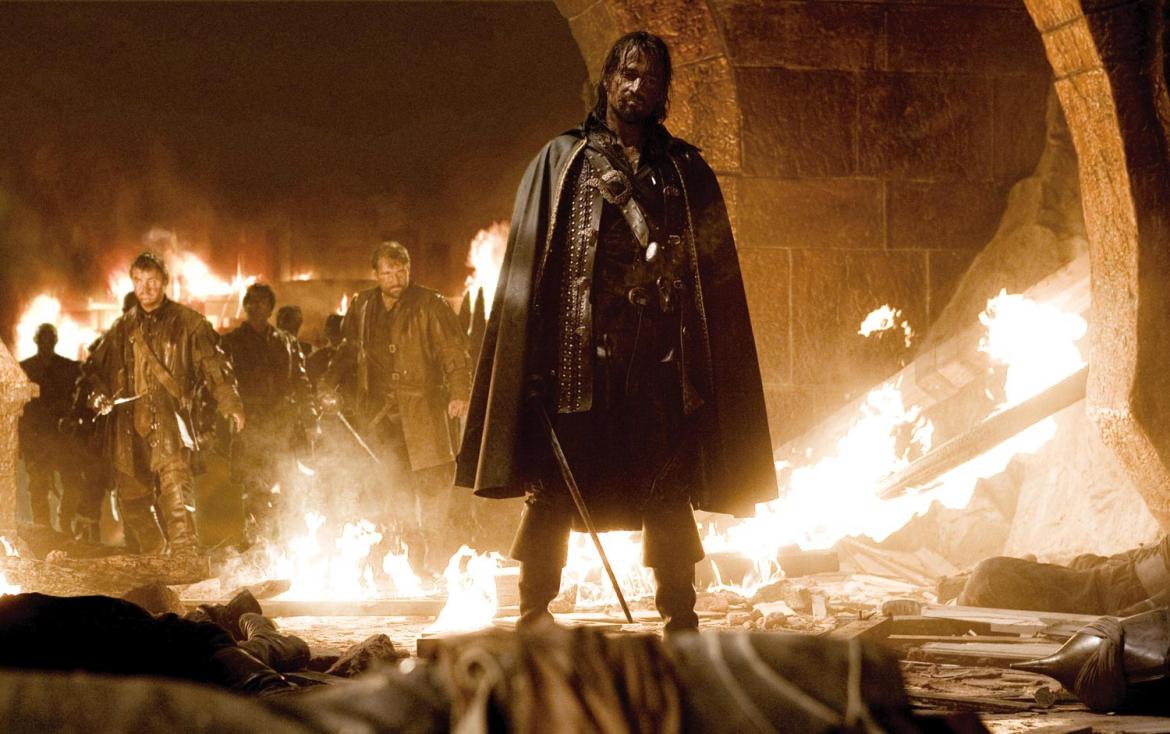 The last of Robert E. Howard’s seminal pulp heroes to get the film treatment, “Solomon Kane” fares better than Kull, but (perhaps just barely) eludes the classic appeal of John Milus’s “Conan the Barbarian.” Unfortunately “Kane,” which is already on DVD in its native United Kingdom, is unlikely to see a wide theatrical release in the US, joining Jonathan Levine’s “All the Boys Love Mandy Lane” among the rolls of genre films that have garnered critical acclaim on the festival circuit but then vanished into distribution limbo.

Writer/director Michael Bassett, who also wrote and directed the WWI-period cult horror flick “Deathwatch,” confronts the classic Puritan swashbuckler with one thing he’s never faced in one of Howard’s short stories or poems: an origin story. Purists may rankle at the thought of Kane being given a concrete backstory, which the original pulp stories of the 1920s and 1930s only flirted with. The origin story makes Kane accessible and sympathetic and gives purpose to the journey the character makes over the course of the film.

When the film starts, Solomon (James Purefoy) is a privateer sacking a fortress in Northern Africa. Lusting after a hidden treasure, he leads his crew into a mysterious temple, where he has an encounter that changes his life. The rest of the film follows the hero’s conversion to Puritanism, a confrontation with his past and a call to embrace the role that his fans best know him in: a mendicant hero confronting the wicked and supernatural as he travels the world. Aiding in his conversion are the Crowthorns, a family of Puritans who accompany the now-pacifist as he travels home to confront his father (Max von Sydow) after a lengthy absence. William Crowthorn (Pete Postlethwaite) has a powerful effect on Kane, as does his young daughter Meredith (Rachel Hurd-Wood). When the family is attacked by a strange antagonist and Meredith is abducted, Solomon inevitably forgoes his pledge against violence in order to rescue her and stop the dark forces plaguing his home.

At first blush, “Solomon Kane” sounds like a transplanted Western, a bit “Shane” perhaps. It does have all the elements for it - a grim, stoic hero, a family of innocents, a mustache-twirling malicious presence (Jason Flemyng’s evil sorcerer Malachi), but “Kane” never allows its audience to forget about the things that go bump in the night for long. From the first scene to the last, we’re treated to frequent confrontations with ghosts, zombies, witches, demons and the grim reaper. Each of the film’s various monsters was designed by Patrick Tatoupolous - best known for his work on “Silent Hill,” “Trick R Treat,” and “Underworld” - and his proficiency at creating creepy, believable creatures is one of the things that makes “Solomon Kane” work so well. Another strength is the cinematography, which evokes Peter Jackson’s “Lord of the Rings” vision at times.

“Kane” matches the mood of its protagonist pitch-perfectly, too. While never oppressive or dark, Bassett’s film is moody and stern, a rare emotional choice for swashbuckling action. Its dourness, though, is informed by its protagonist and Purefoy plays Kane as straight and as faithfully as he can to Howard’s stories.

“Solomon Kane” is a bit of a throwback to the pulpy roots of the horror genre - it has more in common with a sword and sorcery epic than it does with a slasher film, but the film nails its supernatural elements with aplomb and though it’s rarely a scare-a-minute thrill ride, there is an encroaching dread in its reserve. If you have access to a Region 2 player and have a soft spot for beautifully designed, well-made action horror without the slick CGI gloss of “Resident Evil” then “Solomon Kane” is a must-have part of your collection.