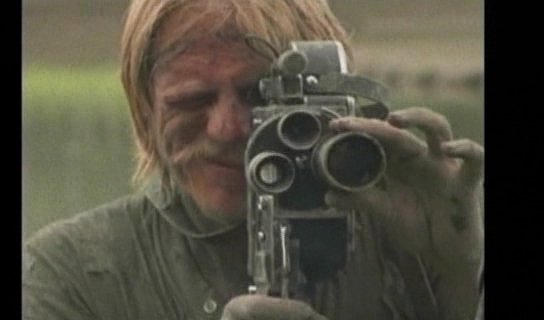 Snuff: A Documentary About Killing on Camera (Movie Review)

Snuff. It’s a word that brings up some pretty strong emotions. Disgust. Fear. Revulsion. Curiosity. It was because of that last one that I checked out “Snuff: A Documentary about Killing on Camera”. I’ve always been interested in urban legends, and snuff films are one uniquely of our time. Politicians and pastors have held snuff films as being one of the ultimate evils in our society, yet, to date, there’s seemingly never been one recorded case of an actual snuff film surfacing. Hoping to find the answer to whether or not snuff films actually exist or are merely urban legend, I had high hopes for this documentary. I was let down.

Given the post-9/11, new-media driven society we live in, a documentary about snuff films has really never been more relevant or topical in our history. Given the proliferation of online video sites, things that were once relegated to “Faces of Death” tapes hidden in the back aisles of local video stores are now at our fingertips. Our cable news channels, in an attempt to gain viewers, shock with images of people being trampled to death for televisions, curb-stomped at political protests or re-air footage from 9/11 without so much as warning the viewer of the graphic nature of the footage they’re about to see. Where snuff films were once things that would be whispered about, they’re now available on demand, whenever you want them, wherever you want them and sometimes where you DON’T want them.

It’s because of this high potential, that I felt so let down by this documentary. It starts by wisely defining what type of film it will be discussing and what it considers to be snuff. For the sake of this documentary, snuff films are films that are produced with a profit in mind, that contain the unwilling murder of a human being. Therefore, things such as Iraq war footage, 9/11 videotape or even “Faces of Death” would not count, as no one was killed for the sake of profit in the video. With that being defined, the film then spends a solid half an hour discussing videos shot by serial killers and war footage. While being interesting topics and providing some truly troubling imagery, it’s not relevant to the discussion, as defined by the film itself. It’s truly confusing why a film-maker would go out of their way to stress these kinds of film as not being snuff, and then later hold them up as examples of the genre and devote so much time to discussing them.

“Snuff” is divided into five sections. In the opening section, snuff films are defined. The last two discuss the above serial killer tapes and war footage. This leaves two other sections, one on snuff in American film and the other being a story about a real life snuff ring that got busted in Russia. The film is at it’s best in these two segments, though it’s still not very strong. In the American cinema section, a large portion is spent discussing how snuff films were used to discredit and argue against the pornography industry. While an interesting thesis, there’s really never anything shown to support any of these claims other than the interviews of a handful of people. And to that, some of these interviews feel off, almost as if the interviewee is acting or reciting lines. Now, that’s a big claim to make, and one can’t say for sure, but it does cast doubt on the credibility of what is being said. I’ll liken it to reading an article on Wikipedia. Yeah, it sounds right, but would you be willing to say it with 100% certainty? It’s not a good feeling for your documentary to have.

“Snuff” is a sloppy film. Like I said, it’s divided into five sections. However, there’s no normal transition from one section to another. Whereas other, better, documentaries would flow seamlessly from one thesis to another, “Snuff” simply throws up a little graphic letting you know you’re now in the next section. Nothing builds off previous sections, and nothing is ever revisited. There are other little things throughout that also chip away at the credibility. For example, one of the major examples in the “American Cinema” section is “Cannibal Holocaust”. That film is Italian. Major problem? No, but like I said, it’s sloppy and makes you wonder how well thought out and researched this film is. Somewhere in the film, one of the interviewees makes the claim that “Bowling for Columbine” is a snuff film because Michael Moore chose to include footage from the shooting in the documentary. Wouldn’t that then make this documentary a snuff film because it contains the same exact footage and more? Again, sloppy. Wait a minute, wouldn’t the Columbine tapes not be considered a snuff film by the very definition defined earlier in this film? Yup. Like I said, sloppy. The closing is yet another story, this one about a pornographer stumbling across a snuff tape while researching a film to release. It’s your basic urban legend type stuff, but the film purports it to be real. I don’t buy it. And when the viewer can’t buy your conclusion, you’ve got a serious credibility issue.

Let me get to my major complaint though. The first story in the film, is absolutely horrifying. It’s a concrete example of a snuff film as defined earlier. It’s horrible to find out that this isn’t just an urban legend. However, it’s thrown away in one quick section. The levity of that story isn’t fully realized, and most of the punch that it contains is muted by the fact that once the film moves on it never revisits it. We live in a world where people pay to watch films of children being sexually abused and murdered. This fact gets discussed in about ten minutes, then we go on to talking about “Henry: Portrait of a Serial Killer”, which gets more discussion time. What the hell? Some dude complains about how the pornography industry gets a bad rap for as long as this story is discussed. How could a film-maker just brush this off? How can they bury such a strong, powerful, disgusting and horrifying fact in with such bullshit? Why wasn’t this the whole movie? This is exactly the kind of story that the film explicitly says it’s going to talk about, yet it’s thrown away.

It takes a lot for me to actively dislike a documentary this much, but this one really goes out of it’s way to make me hate it. It commits almost every cardinal sin when it comes to documentary film-making. It contains factual errors, non-credible subjects, a loose focus, poor defenses of it’s theses, and worst of all, buries the most meaningful and horrifying fact in the middle of a boggy mess. If you really want to learn more about the topic, honestly, you can read the Wikipedia article on the topic in way less time and probably come off more informed. Pass on this one.

Movies Like Snuff: A Documentary About Killing on Camera