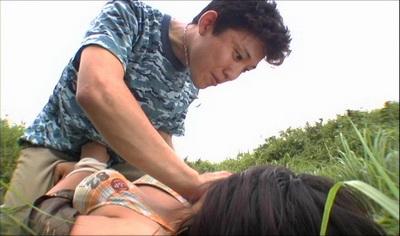 If you watch a lot of horror movies (and if you’re reading this, of course you do) then you’re probably aware that the majority of films made in our beloved genre are utter, irredeemable crap. That’s the nature of the genre. Horror is the refuge of first-time filmmakers with little to no idea as to how to make a movie as well as major studios who want big returns on a relatively small investment. I’m not normally a big fan of “so bad they’re good” movies – the older I get, the more accurate this Onion headline becomes. When I’d only seen a handful of campy, bad movies they seemed like fun. After 20 years of being an avid horror fan I’d much rather watch something that I actually enjoy.

I did not enjoy “Slaughter Island”, but as I watched it I became fascinated with just how perfectly generic a horror movie it is. You know those scenes in movies and TV shows when the characters go see a horror movie and we get to see a few clips from some made-up movie? “Slaughter Island” is that movie, even down the silly, generic horror movie title. It’s amazing how little personality, character or originality went into the making of this movie. There’s a part of me that suspects that this movie is actually the output of the trial run of some sort of horror-movie-making robot the Japanese are secretly developing.

The story of “Slaughter Island” is that there’s this island and people get slaughtered on it. The slaughterees are a group of ten young people who are only distinguished by the color of their bathing suits. The girl in the yellow bikini is a big fan of giving the peace sign in photos. The girl in the black bikini likes splashing around in the ocean in slow motion. The girl in the plaid bikini is dealing from feelings of insecurity due to her overachieving sister and her distant father. Or so I assume. From the movie all we learn is that she likes to giggle.

The blandness of the movie extends to the nature of the killer. The island is cursed or something like that and the killer takes the form of the people it kills. Yep, they didn’t even bother to come up with any kind of potentially iconic killer, they just squirted a little fake blood on the actors one by one and gave them a pointy stick. There’s not even any attempt to play on the “killer among us” theme that many great horror movies like the “The Thing” mined. No, this movie is just a bunch of Japanese girls in bikinis crying interspersed with shots of fake blood splashing on the inside of a tent.

The fake blood in this movie is noteworthy, though, for being some of the worst fake blood seen in a horror movie since the mid-70s. Apparently Karo syrup and food coloring were beyond the budget of “Slaughter Island” so they concocted some sort of watery orange substance that would probably be delicious with tempura. Even worse are the movie’s attempt at intestines which look like a ripped-up pair of pantyhose soaked in the aforementioned fake blood/dipping sauce. At least the filmmakers got good use out of those nylons, reusing them a few times in the kill scenes.

Unless you’re reviewing the film for a horror movie website, I really can’t think of a single reason why anyone would want to intentionally watch “Slaughter Island”. It’s not scary, it’s not interesting, it’s not well-made, it doesn’t have any identifiable characters. I guess the island itself is pretty, so there’s that. Usually when I give a movie anything below a “5” I try to be a gentleman reviewer. I’ll typically give them a point or two for managing to take the lens cap off and point the camera at something. “Slaughter Island” is so blank and soulless, though, that I think I’d be doing the movie a disservice to give it anything more than a “0”. This isn’t a horror movie, it’s the ghost of a horror movie. You could probably set it up as a video installation in an art gallery and call it a wicked commentary on modern horror movies. In your living room, well, it’s just a boring waste of time and perhaps one of the least ambitious movies ever made.