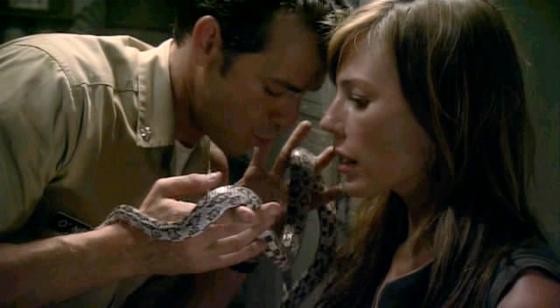 When one says a movie consists of Luke Perry fighting giant snakes on a submarine, a few things may pass through your mind. First off, a feeling of general confusion, expressed with a statement of "You're watching what?". Secondly, you may hone in on the fact that this basic premise of "Silent Venom" sounds extremely Freudian and wonder why Luke Perry has resorted to making Village People fan films. Lastly, you may find yourself thinking that this idea could be vaguely amazing if done right. The idea of giant snakes on a submarine may indeed sound scary and Mr. Perry was rather dreamy as a 30 year old teenager on "90210". I hate to be the one to break it to you though; "Silent Venom" is none of these things. It's simply a direct to video crapfest and nothing more.

Dr. Andrea Swanson, played by Krista Allen, has discovered a breed of mutant snake on a remote pacific island. Accompanied by her assistant Jake, they have been studying the venom of this new breed of killer snake in hopes of making a strong anti-venom to protect US Troops from any brand of nerve agent and chemical warfare. It doesn't take long however before the Chinese Navy learns of their presence and sets course to chase the scientist off of her island.

Enter Luke Perry as Lt. Commander James O'Neill. He's a bad boy, naturally, and has fallen out of favor with his superiors just before his retirement. Tasked with one final mission, they are taking a retired submarine to Okinawa where it is being sold off. Midway through their trip, they are made aware of the Chinese encroachment on Dr. Swanson's island and given orders to remove her and her assistant to safety. The scientists and their snakes are loaded aboard the sub, the Chinese lay chase to our skeleton crew of swabbies and before we know it, killer mutant snakes are loose in the depths of the Pacific Ocean!

Does the plot to "Silent Venom" sound vaguely like "Snakes on a Plane" to you? Because it should, they're making no efforts here to hide the fact that they've lifted it full fledged and plunked it down into a new enclosed vessel with no chance of escape. There is no change here at all, except the fact that you do not have anybody with the acting chops of Samuel L. Jackson and master of curse words to carry the movie. They don't even try and give it the same type of bad ass attitude as Mr. Jackson provides; you simply get Luke Perry acting as a submarine Commander.

To their credit, they do use real live snakes for the standard strain of mutants on board the sub. This keeps "Silent Venom" from straying too far into the ridiculous category at least. The CGI giant mutant snakes are still there though, they're just used in surprising modesty for a change. From what my research tells me, "Silent Venom" is in fact just a direct to video movie and not a SciFi Channel original. This is surprising because the film would be right at home there.

Surprisingly, there is actually a bit of acting going on in "Silent Venom". Do keep in mind though that any form of actual acting is going to look ten times better considering the caliber of extras working around them. Perry is actually believable as a Submarine Captain! Once the shock of that statement wore off though, it was apparent that he was stuck in one mode throughout the entire movie, which was straight laced and "Mr. Serious" through out.

Krista Allen as a scientist? Yes, that turns out about as you would expect it too. There's no question that she's there primarily to lend eye candy to the cast of men in a tin can, which she does well. There's just not a whole lot of acting going into the scientist image however. Despite their flaws, Allen and Perry's performances still come across well due to the fact that every one else playing bit parts around them are about as dead pan and stiff as a board. Often times evoking James T. Kirk without the cool, they are often stilted at best and laughable at worst.

"Silent Venom" is a rather unexciting re-hash of "Snakes on a Plane". It's as simple as that. It's not good, the effects are rather laughably bad as is the majority of acting involved. That said, when compared to a Syfy Channel original movie, it's actually not so bad. The plot flows along, there is action and a tiny bit of tension. If you're a fan of B-Movies, it is watchable though be warned that it is completely devoid of campiness, which is what generally makes these types of film fun.