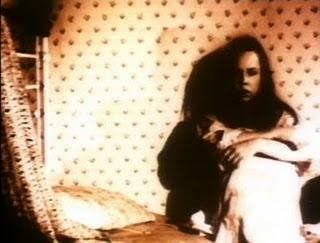 I’m going to hazard a guess here and say that if you are a regular reader of this website, chances are somewhere in the depths of your DVD collection you have at least one of those DVD sets with multiple horror “classics” packed on a handful of DVDs. It’s happened to all of us – you see a few titles you recognize, a few more that have to be watchable (“Werewolf in a Girl’s Dormitory” anybody?), and hey, who doesn’t need a seventh copy of “Night of the Living Dead”? I’ll also guess that you watched no more than three of the movies before realizing that murky VHS transfers of rightly forgotten movies maybe wasn’t the best ten dollars you ever spent. If you’re looking for some holiday-themed horror this Christmas you might want to blow the dust off that box set and see if it has “Silent Night, Bloody Night”, a gothic proto-slasher that beat seasonal classic “Black Christmas” to the punch by a couple of years.

“Silent Night, Bloody Night” tells the story of the Butler House, a rambling mansion in an isolated New England town. The house was abandoned for many years until Christmas Eve, 1950 when its namesake, Wilfred Butler, returned home and burned to death under mysterious circumstances. It stood empty for another twenty years before Butler’s Californian grandson Jeffrey decides to sell the house to the town. Around the same time, an unnamed inmate escapes from a neighboring mental institution and certain townspeople begin receiving phone calls from a creepy whispering man calling himself Marianne. Shortly after these calls, the townspeople are brutally murdered. Jeffrey and the mayor’s daughter Dianne have to untangle the terrible secrets of the house and the Butler family to discover the identity of the murderer before they become his next victims.

What makes “Silent Night, Deadly Night” more interesting than most slasher films is that it was made before the tropes of the subgenre were nailed down. It doesn’t follow the rules of slasher movies which makes it a little more unpredictable than the movies that followed it. In fact, one of the most remarkable traits of the movie is that it could almost be better classified as a giallo than a slasher. The killer (who has mysterious motivations) is mostly personified by his black gloves and many of the kill scenes are shot from his POV. It seems like this would have to be a coincidence coming from an American movie made in 1972 but if you slapped a bad dub track on this movie you could probably fool a giallo fan into thinking this was the real thing.

Aside from the well-done POV scenes, there are a few other unique stylistic choices. Most notable is an extended flashback scene near the end that sheds some light on the house’s past as a mental asylum. The segment is shot in sepia-tone with narration over it which makes it look like an old photograph come to life. It gets even more bizarre in that most of the inmates are played by actors and artists from Andy Warhol’s Factory, probably brought on board due to the fact that Warhol regular and future genre film staple Mary Woronov plays the role of Dianne.

For all its interesting touches, the film does have some pretty significant flaws. One of the most glaring problems with the film is more due to its public domain status than any fault on the filmmakers’ part. Quite frankly, most of the DVD copies of this film look like crap. In many of the low light scenes, it’s nearly impossible to tell what’s going on onscreen. Unfortunately, this film is caught in the odd bind of being both obscure and widely available which means that its very unlikely that we will ever see a restored DVD release. Technical flaws aside, there are also some major plot holes that become apparent after the big reveal. It impossible to discuss those plot holes here without venturing into spoiler territory, but suffice it to say, there’s a pretty marked difference between the behavior of certain characters in the flashbacks when compared to the present day.

Casual fans might find it slow-paced and musty but hardcore genre heads interested in the roots of modern horror movies are more likely to consider “Silent Night, Bloody Night” a forgotten gem. It might not have been as influential as “Black Christmas” but with its unique blend of Hammer-style gothiness with the slasher themes that would launch a thousand horror movies a decade later, it’s a shame that “Silent Night, Deadly Night” has been given such an undignified treatment on DVD. Since it’s very possible that many horror fans already have this movie in their collections and don’t even know it, this holiday season would be a great time to give the usual horror Christmas movies a rest and rediscover a minor lost classic of the genre.