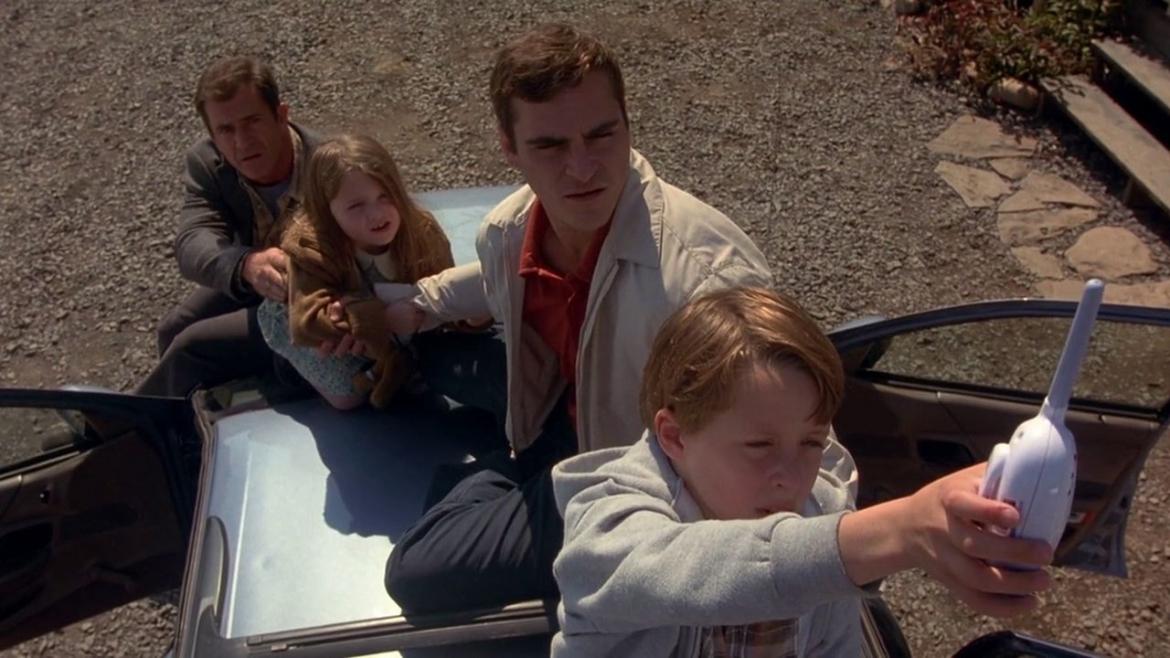 During one of many introspective moments in writer/director M. Night Shyamalan’s Signs, as the Earth inches towards what seems to be an inevitable alien-induced apocalypse, Graham Hess (Mel Gibson) posits a theory to his younger brother, Merrill (Joaquin Phoenix). Now this is no offhand musing. It’s the thesis statement of Shyamalan’s film. Graham explains that there are two kinds of people in the world. There are those who see miracles and there are those who see coincidence. Whether you agree or disagree with Graham’s take, this dichotomy is roughly applicable to the film itself.

Set against the backdrop of an alien invasion, Signs is really a story about redemption. For many, the crop circles marking fields around the world and the lights dancing in the night sky threaten the end of the world. However, for the Hess family, whose Southeastern Pennsylvania farm was also marked, because Shyamalan, its own world seemingly ended months earlier with the unexpected passing of its matriarch. Beyond the obvious, this loss has cost the family members in ways they’re still processing, however, it also offers unexpected hope when they need it most.

Signs is not immune to Shyamalan’s propensity for stilted dialogue and heavy-handed philosophizing. At times, his plot developments feel equally forced, giving rise to easily nitpicked holes and gaps in logic gaps. Worst of all is his decision to include himself in a fairly sizeable dramatic role, something that – despite his many talents – he’s not suited for. For all those missteps, it’s easy to look at Signs as a failure.

And yet this reviewer falls into the camp that sees Signs as a success story. Why? Shyamalan has once again surrounded himself with a sterling cast. Gibson, Phoenix, and the kids (Abigail Breslin and Rory Culkin) all manage to overcome the narrative ungainliness and the occasionally inhuman-sounding dialogue to make you vigorously root for them. When Shyamlan’s films fail (The Happening) this is a feat the actors were unable to pull off.

Shyalaman also has precious few peers when it comes to crafting tension. This is most evident during a sequence set at a child’s birthday party in Brazil and relayed to Merrill via a news report. As Merrill watches in horror, Shyamalan skillfully tips his cap to a found footage subgenre still in its infancy with a sequence that will go down as one of his most effective scares.

Depending on your perspective, Signs is either a dryly humorous yet moving vision of a family coming to terms with its place in the universe and the hands it’s been dealt. Or, it’s an awkward exercise, shrouded in a persistent gloom and plagued by the same bad habits that would derail Shyamalan’s career just a few short years after this film’s release. The only way to know which one you are is to experience it.