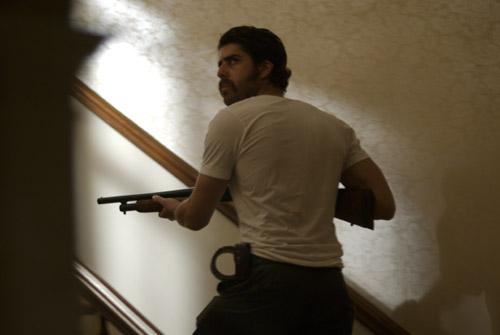 From Within (Movie Review)

A small southern town is plagued by a rash of suicides and no one can figure out the cause, despite the efforts of the local evangelical ministry in town that's investigating. The first suicide to kick off the pattern is the elder of two boys. Their mother has long been known to practice witchcraft, much to the chagrin of the local Christians. They distrusted her so much, that eventually they burn her at the stake. With Aidan being the last of the witch's family line all eyes turn to him when talk of someone to accuse for the plague starts up.

"From Within" is the surprise of the After Dark Film Fest so far as it doesn't sound like much of a movie from its plot summary. At first blush it seems like your typical teen angst against the church type of film but once you sit through the first act, it proves that there is a little bit more at work here. The witchcraft takes a back seat to the intrigue and small-minded towns folk as they begin to rally against what they perceive to be a common foe, and in that lies the intrigue that makes the movie interesting.

While the suicides are talked up as the bulk of the summary, they are in fact low key in the overall sense of things. While a movie relying on such acts as a key point would lead one to believe they would be quite gory sequences, they are in fact played down to make room for the storytelling. You do see blood, but it is minor. That is not to say that the deaths are unexciting however. Some are standard fare and some are nicely built scenes to make you cringe. A solid mix of both makes them worthwhile and interesting.

The core of "From Within" is a plot framework we've seen a million times over; a group bands together to put an end to what they see as evil. Said evil returns twenty years later and attacks their children. That is the essence of what is at play here. There is just enough added spice however to make the movie stand out from these tropes. Through out a good chunk of the film I spent my time guessing on what was actually going to come from this church plot. The crew does a good job of interweaving it just enough to make it intriguing. There are no blatant red herrings slapping you in the face to make sure you're paying attention, just subtle twists and turns to keep you guessing. Thankfully for director Papamichael, he had a decent enough cast to pull it off.

The biggest name of note involved with "From Within" has to be Thomas Dekker, star of the Fox Terminator show, "The Sarah Connor Chronicles". His name has graced horror headlines a few times as of late as he has professed his love of the genre many times. Here, he is not making a great stretch from his portrayal of John Connor; he is moody, angsty and dark. He isn't necessarily off-putting in his role of Aiden the witch-boy, nor even annoying. He is just simply there. Blending in with the scenery a large part of the time, he does not provide much excitement.

The other known quantity in the cast however does provide plenty of excitement; Adam Goldberg as the redneck soldier of God is great. A far cry from most of his roles, he is both sleazy and confounding in his statements and delivery and becomes the highlight of the flick. As the movie reaches its third act and we hear Goldberg's pronouncement of how he found God, he becomes downright unsettling.

"From Within" is a moody, slow burner that has some good intrigue and a decent plot. It's not going to make you jump however, and it's not going to make gag. What it will do is keep you engrossed and actively participating in the mystery as the plot unfolds. The movie could use a kick in the pants at times with a few slower scenes that take away from the overall flow, but it never leaves you wanting to hit stop on your remote.