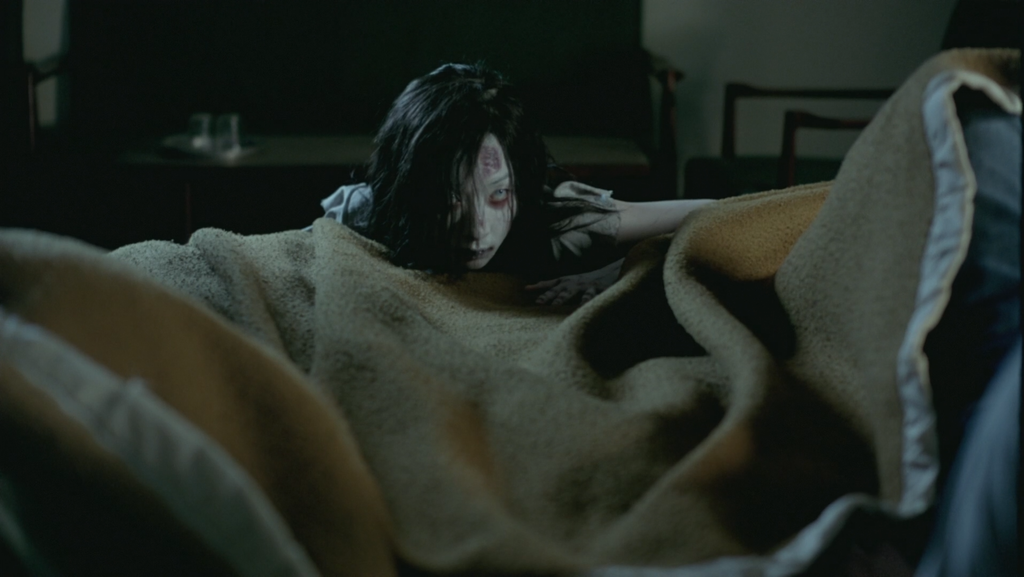 Shutter is a movie that launched a thousand remakes. Well, more like three remakes to be precise, one in America, and two in India . Released right around the wave of J Horror films that would also find themselves endlessly remade and built upon (Ringu, Ju-On) this Thai film follows a similar general story arc and aesthetic despite its different country of origin.

Tun and his girlfriend Jane are on their way home from a friend’s wedding when they hit a young woman who seems to appear in the road out of nowhere. After making a split second decision to flee the scene rather than check to see that she is alright, the two start to drift apart. Jane is struggling with her conscience and worries that Tun isn’t as concerned as he should be. When Tun, a photographer by trade, begins seeing strange blurs and shadows in his photos, Jane starts digging into spirit photography, in hopes that perhaps the girl’s spirit will be able to say what she needs to say and move on. Tun’s friends all start mysteriously dying and it becomes clear that the ghost’s agenda is clearly not a peaceful one.

Taking clear inspiration from earlier J Horror movies that were popular at the time, Shutter's resemblance to movies like Ju-On and Ringu goes farther than its story line of a young and bitter ghost who stalks her victims on a mission of revenge. The visual style and score also wear their influences on their sleeve. The design of Natre (the ghost) is text book. Always shown wearing a loose-fitting white dress or nightgown of some kind, long, greasy, black locks obscuring her vacant and terrifying eyes. Even her movements and scare tactics feel like they have come right from her predecessors.

This does not mean, however, that Natre is ineffective as a monster. The film does a great job of creating some very memorable set-pieces that are sure to stick with you and maybe even have you looking over your shoulder or checking dark corners when you walk into a room. A scene where she slowly emerges from the utility sink in Tun’s dark room, for example, is one of the first times we see this vengeful apparition and it definitely sets a precedent that the movie is largely able to keep up throughout. The top of her head, barely perceptible in the ominous red light as it crests the dark water, is not immediately recognizable. When we see the strands of hair start to overflow the sink’s edge however, the dread becomes almost palpable. It is a very effective scene, and it certainly isn’t alone.

This film may not be a wholly original piece, but it absolutely succeeds at being exactly what it is. And like the other films I have compared it to thus far, it was followed by remakes and sequels that paled in comparison. But this movie should not suffer at the hand of its followers.