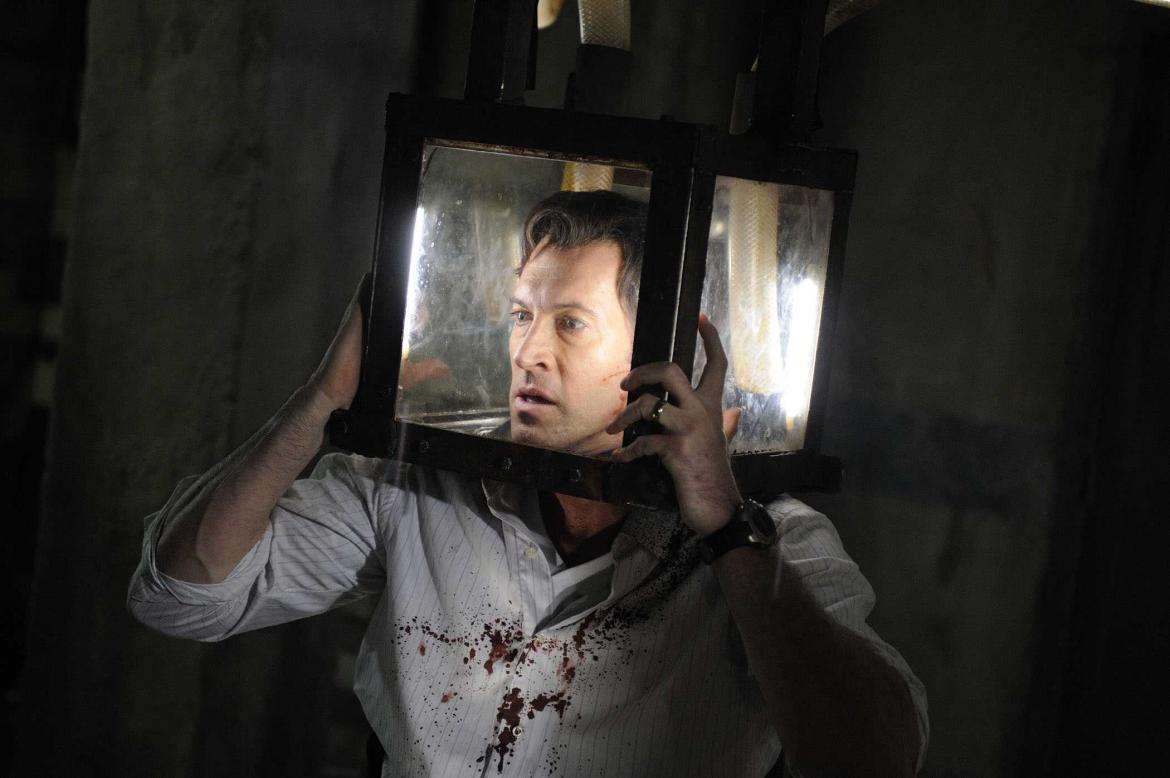 I have a confession... I have never seen a "Saw" sequel. Not one, ever. The original was released at a time in 2003 when I was beginning to drift away from the horror genre. Having avoided it in it's original theatrical run, I caught it on video almost a full year later, and to my surprise really loved what the film had to offer. It was dark, intense, and oh what a twist! It's also a complete film though, and so when I heard they were making a sequel not long after the original's release, I was more than a little dumbfounded. As the years have gone on and the sequels keep coming, I've grown increasingly uninterested. So why am I reviewing "Saw V", you may ask? The reasons are two fold.

First off, no one else would do it. Being as I'm sort of the conductor around here, the buck officially stops at me when it comes to making sure things get done on the site. Secondly, I do have a bit of a fascination with something Jon said on the very first episode of our podcast... that these "Saw" films, in a lot of ways, mimic the "Friday the 13th" franchise in it's heyday. Over the top, easy to love horror spit out conveyer belt style just in time for the next Halloween to arrive. Given my complete and utter devotion to Jason and his filmography, the irony of my past hatred of the "Saw" films is not lost on me. So, with my uninitiated perspective in mind, I ventured into the world of "Saw" today for the first time in almost 5 years, and you may be surprised at what I thought.

"Saw V" picks up immediately after the previous film, with Jigsaw's body on a gurney and Agent Strahm (Scott Patterson) busting into the room to presumably rescue whomever is still alive. Before I go any further, please remember that having not seen the previous films, these opening moments didn't mean a whole lot to me. Okay, moving on. What essentially happens from here is that Strahm gets caught in a jigsaw trap, and is forced to give himself a self-tracheotomy in order to survive. His survival quickly becomes a thorn in the side of Agent Hoffman, who throughout a series of flashbacks in the film we learn was not only an additional accomplice to Jigsaw during his reign of terror, but intends to carry on his legacy now that his master has passed.

And he intends to do so with a whole new set of people, handed to him on a platter by the now deceased Jigsaw, who need to learn the value of life. 5 people to be exact, a number I'm sure was chosen as a wink and a nod to the audience. The five people consist of a real estate agent, trust-fund junkie, investigative reporter, city planner and... some girl who gets decapitated early on and whose relevance to the story kind of escapes me. Which shouldn't be a surprise, because 20 minutes in I was regretting not having brought a legal sized pad of paper in order to keep track of all this stuff.

The participants make their way room to room through a series of puzzles which appear to be designed to weed out the weak in the herd. Each one, in it's own demonic way, appears to be designed to turn the participants against each other, a hypothesis that is backed up by the fact that they enter each room one person less than they did the last. As the herd is culled one by one, their relations to one another are exposed and Jigsaw's master plan is revealed.

While all this is going on, Strahm is sneaking around the shadows of the FBI building trying to make his case against Hoffman, who he is now convinced is somehow involved with the Jigsaw murders. Hoffman is no dummy either, and is making his own plans to get rid of Strahm. There are a lot of flashbacks to retcon Hoffman into the previous films, as well as a handful of massive exposition dumps designed to sew everything together neatly. Not surprisingly, it doesn't totally work.

"Saw V" isn't really what I would call a good film. But then again, it's not nearly as bad as what I had expected. It's almost as if enduring these marketing campaigns for 5 years has made me so jaded, that I expected to be physically upset by the experience of sitting through one of these sequels. What I actually experienced, much to my surprise, was something akin to what it must have been like to see a "Friday the 13th" sequel in the theaters. I'm not however ready to concede that these two series are all that similar.

The thing about "Friday the 13th" is that anyone can jump in at any point and get caught up fairly quickly. Most survivors are jettisoned in the next film in favor of an all new cast, and the basic premise is easy... huge lunk kills for no reason. The nature of these "Saw" films is more complicated. You're dealing with human antagonists who are not immortal, and who harbor complicated motives for their killing. Because of these things, this series is not nearly as accessible to the general movie going public as our masked killer was back in the day. Add to that the fact that this one picks up immediately at the end of the last film with no true recap, and it almost seems as if they don't want new people to jump into this series.

Which is not to say that I didn't get a strange enjoyment out of the experience, and in particular the wacky trap setups, undoubtedly the reason that most people are still going to see these things in the first place. The group of 5 who are thrown into the dungeon together are all played by some pretty entertaining character actors. Their actual characters are sort of non-existent, but the half-baked connection they cook up to tie them all together was enough for me. Julie Benz is the only real standout, but that's probably because I've been admiring her performances so much on "Dexter" that I was pretty excited to see her in something else. I wish she was given more, but that's what sequels are for, right? Considering the abrupt nature of the ending and the setup for the next film, it's obvious that they're not even trying to make complete movies anymore. They're simply segues into next year's bloodfest, reminiscent of those old serialized stories that used to play before movies. "Will Jigsaw's protege live on to kill another day? Find out next time on Saw!".

I had so little expectations for "Saw V" that it's entirely possible that I'm white-washing it for you, and that if you go to see it you might end up hating me more than that time I recommended you go see "Postal". But in the state of mind I was in, I was able to sit back and let the experience wash over me, without really caring if the story made sense, or how the characters and mythos were being treated. In that sense I actually enjoyed "Saw V" way more than I care to admit. I enjoyed it enough that I'm actually considering revisiting the sequels I've missed over the last few years. Another admission I'm not entirely comfortable making. Suddenly, as I sit here writing this, I feel like I'm in an AA meeting confessing to some terrible affliction. So in the spirit of that, let me end this review by saying this. "My name is Eric, and I liked Saw V. Please help me".