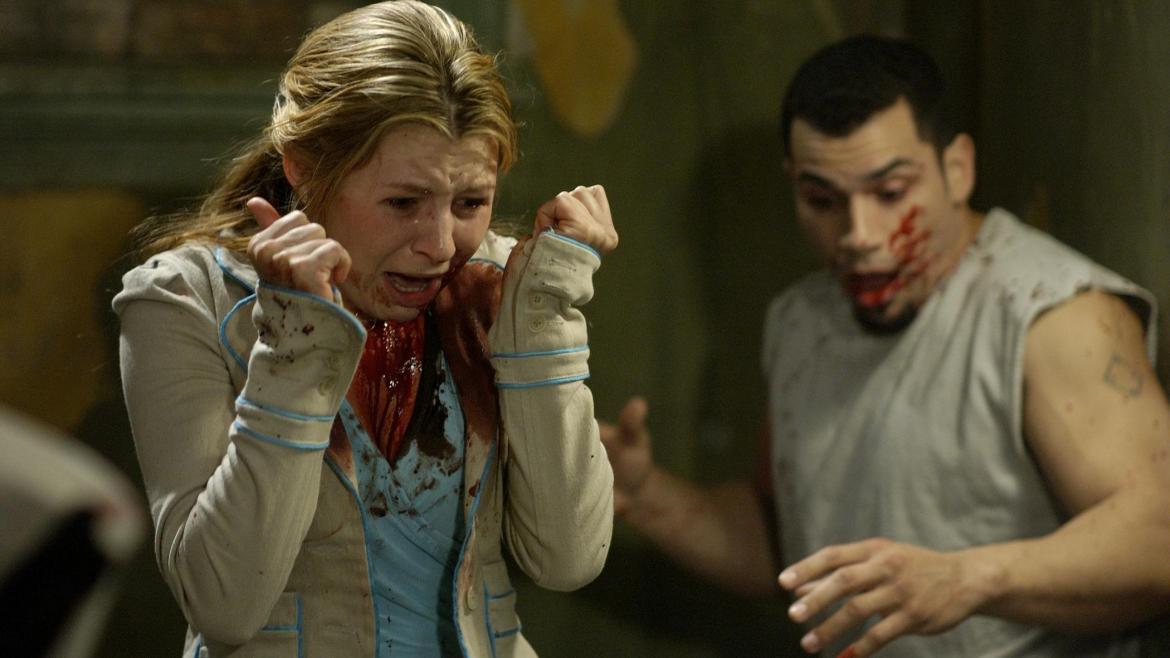 As the first of six eventual sequels, Saw II marks the initial attempt by Wan, Whannell and Co. to convert their grimy Seven knock off, brick by viscera-soaked brick, into a bigger franchise with a far more ambitious story. Even in this early installment--which involves strangers held captive in a booby-trapped house of horrors--all of the series’ main ingredients are here, for good or ill.

Like every Saw movie, this one opens with an appetizer, assuming you like your appetizers scabbed over with little bits of bone in them. After a wildly over-edited sequence (a series trademark) in which an anonymous man fails to dig a key out from behind his own eyeball and thus has his head smashed inside a bear trap, we’re introduced to the anti-hero: the cynical, corrupt Detective Matthews (Donnie Wahlberg) for whom this previous victim was just the serial killer Jigsaw’s bait. Jigsaw (Tobin Bell) leads Matthews straight to his lair; a few cops are maimed in the process, but it’s all a prelude to the main event. Once Matthews and his partner, Det. Kerry (Dina Meyer) are there, the killer reveals an array of television screens playing a feed of Matthews’ son, Daniel, waking up in a nerve gas-filled, deathtrap-laden house with seven other people, being told they have two hours to find an antidote and live.

The house set-up is transparently a way for the producers to mainline their gruesome ideas straight into the audience with little getting in the way, but it gets the job done--especially when one of the inhabitants turns murderous and begins stalking everyone else. Here’s a room with a furnace for you to get burned alive in! Here’s a room with a glass box full of razor-sharp metal slivers to get your hands stuck in! Here’s a room with a pit full of syringes, and also a lot of old dolls and furniture that look like they were dredged up from the bottom of a lake for some reason!

The Saw franchise embodies so many odious trends in horror movies--the lazy sets that are unrealistically, disgustingly seedy for the sake of being disgustingly seedy; the terrible acting by (mostly) D-Listers and nobodies (this time around the award goes to Beverly Mitchell; runner-up: Shawnee Smith’s wig); the philosophical ‘message’ that’s only deep if you’re a twelve year old; the equally adolescent, unrelenting pessimism that aims straight for rock bottom and burrows astoundingly lower.

And yet! There has always been something revoltingly appealing about these movies, something that makes them fun and even rewatchable: the filmmakers’ inner adolescent speaking directly to our own. I still haven’t caught every single entry, but I’ve never seen one that’s truly terrible (in the way that, for example, most of the Hellraiser franchise or any given one-star Netflix offerings are). Yes, oh God yes, the Saw films are bad, but they are a special blend of bad, a bloody swirl of horrendous execution, surprising invention, and dumb ambition. They are are so much better than their low-grade (or, alternately, self-consciously ‘serious’) torture porn peers, so much better than they have any right to be.

Saw II will disappoint new fans wanting a rehash of its predecessor, but it also introduces the MO for the next five sequels: this series doesn’t really repeat itself.  And if your stomach is strong enough to get through the gate, they marathon well.