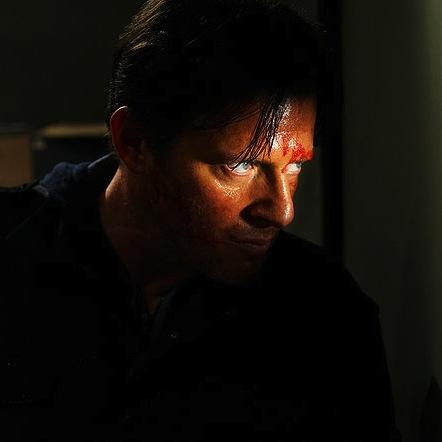 Nearly two-thirds of the way through "Saw 3D" there comes a scene wherein the primary target of one of Jigsaw's traps must extract two of his back molars in order to find a numerical code etched on them. Let's put aside the fact that etching numbers onto someone's back molars, while still in their mouth, without them realizing the numbers are there, goes well beyond the realm of fantastic. What's more interesting about the sequence is that it almost immediately begins to feel like a snickering metaphor for the "Saw" franchise. Compared to the elaborate-to-the-point-of-impossibility traps that populate the rest of the film, this stripped down gimmick harkens back to the eponymous saw that gives the series its name while also winking at the audience. How much fun we've had these last seven years -- just like pulling teeth.

And that's essentially where we find ourselves: seven years older, but finally through with a series of films that feels as though it hasn't grown or improved since its inception. In fact, as much as Jigsaw and his minions have worked to convince us that the stakes are growing, that their gospel is spreading, we've actually found ourselves with not only the same tired concepts -- "face death to appreciate life" -- but also many of the same idiotic goons we've spent the last several films trying to forget.

"Saw 3D's" opening sequence acts as the best possible launching point for a binary view of the film. On the one hand, the scene -- involving a trite love triangle where a "slutty" girl's two dopey suitors must decide to either kill one another or allow her to be killed -- illustrates the highlights of the latter "Saw" films. Increasingly abstruse kill devices tear apart increasingly non-descript non-characters. These scenes are at least watchable in a blackest-of-black humor kind of way, and they usually meet the expectations of the hardcore "Saw" fans. In this particular case, there seemed to be an attempt afoot to move the film toward a more tongue-in-cheek direction. The gore that results from the triple-saw contraption is far brighter and redder than the standard "Saw" gore effects. There's also a goofy back-and-forth about who the female victim loves more, with her allegiances shifting as the saws begin to move. It was a strong opening, visually reminiscent of the "Final Destination" series, that at least felt a little fresher.

At the same time, this particular sequence, which takes place in a public square, points to the grandeur and heightened stakes that this final film has promised in nearly all promotional material. The victims awake to find themselves sealed in a display case amid a large shopping area, where the public at large could be exposed directly to Jigsaw's handy work for the first time. This however, would be the last sequence of this kind in the film. From here on out, the film follows the formula of every other "Saw" to a tee: a primary victim must make his way through a long sequence of traps involving friends and loved-ones, only to arrive at his own final test. These experiences take place in world seemingly replete with dilapidated factories and rundown, out-of-the-way industrial buildings. While Jigsaw's name pops up on a handful of news broadcasts and demands the attention of the entire police force, it's hard not to see the film's opening as anything but a tease for the "larger" film that might have been made, a film that by all rights would have still been terrible, but at least would have been different from "Saw IV, V and VI."

While "Saw 3D" never truly approaches the tone or even content of its opening, it does go for broke on the ridiculous convoluted "Saw" plotting. Detective Hoffman -- portrayed by the girthy Costas Mandylor -- somehow maintains his cover, while simultaneously rounding up whole networks of victims in need of "education," and building and deploying some of the most complex "Saw" traps to date. Logic is abandoned so early and so often that you almost forget to question how Hoffman/Jigsaw is somehow better funded than an international terrorist organization and craftier than an all-star lineup at Maker Faire. The series's overwrought "legacy" takes a central role, as it has in nearly every film since the first, and here, many past Jigsaw victims are brought back into the fold to comment on and pay homage to the series's many twists and turns. Though he never feels like anything other than an excuse to deploy absurd traps, the main character is eventually revealed to be a false Jigsaw survivor who has made a career out of lecturing and writing about his made-up experience. This probably felt genius when it occurred to the screenwriters, but on the screen it is transparent and flabby.

Other than a return from Cary Elwes, one of Jigsaw's originals, the film's only real brightspot -- shockingly -- may be the 3D, which at least makes several scenes watchable for their sheer insanity. There are no less than three intestines and countless other body parts that fly in all directions out of the screen. Of course, something as cheesy and gimmicky as 3D deserves a movie as gimmicky and absurd as "Saw."

Putting aside questions of quality, it is fair to say that "Saw 3D" should at least serve to please fans that have stayed true to the series. While it never truly develops the Jigsaw-as-prophet mystique that the series always wants to promise and never deliver, "3D" does at least bring the current Costas Mandylor Jigsaw run to an end in a reasonably plausible manner. Some retconning is necessary, but that should come as little surprise. The flip side of this same situation though, is that the door doesn't feel slammed shut against a future "Saw" film. If we can all make it to Halloween 2015 without another Jigsaw sighting, we may be able to admit that our long national nightmare is finally over.