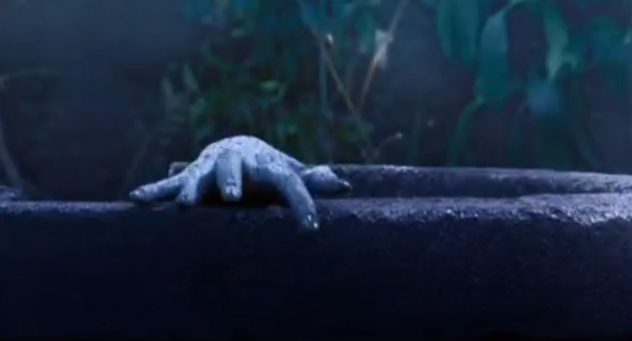 I've got a lot of nostalgia for movies like "The Ring" and "The Grudge." I didn't really grow up with horror movies, so at the time these came out, "horror" basically meant: "I Know What You Did Last Summer" movies, the later and more embarrassing sequels of "Halloween," and a whole host of "Scream" knock-offs.

When I saw "The Ring" in theaters, and the dead girl "Sadako" crawls out of the well and out through the television set at the end, it completely blew my mind. It was the first time I'd seen a horror movie where it felt like someone actually cared about making a genuinely creepy and inventive film. So even now when I find an ultra-low budget sequel to either of the Japanese franchises "Ringu" or "Juon," I have to admit I get pretty excited. I know they aren't going to be anywhere near as good as those originals, but it's still fun for me to revisit those themes and those images of dead Japanese girls with the long creepy hair.

In "Sadako 3d" there is no longer a cursed VHS tape that kills people who watch it; but now the curse is updated with it's own internet video instead. A high school student shares with her class that she knows of a video that will kill you if you watch it, and her entire class jumps up screaming that they all want to watch it immediately, which I suppose is a cynical but fairly realistic reaction from a group of teenagers.

The video soon begins to kill students and their teacher Akane tries to intervene. She is somehow able to resist the cursed video because she has some kind of superpower that whenever she screams it destroys things (sort of like Banshee of the X-men). Where she got this power, or why she is able to resist Sadako with it, is never really addressed, which is something I suppose I'll have to forgive because I'm not sure if I ever watched "Ringu" 3 or 4. I suppose it's possible her character and her special screaming power may have been introduced in one of those sequels -- but if not, it was an incredibly bizarre plot twist.

We then find out the video was made by a young man named Kashiwada who wishes to bring Sadako into the physical world. He does this by throwing dozens of girls into the cursed well and making a new evil viral video by committing suicide and putting the video on the internet. Apparently these bodies aren't good enough because Sadako wants to use Akane's body to enter the physical world. She abducts Akane's boyfriend into the internet and forces Akane to face her in a final showdown.

This movie has a lot of issues, but I think the main problem is that "The Ring/Ringu" were never really built for sequels. They were slow-paced movies that built to a spectacular visual conclusion, which is not something that could ever be repeated and be as effective. Sadako is an iconic character, but only as image. She doesn't speak, she didn't have a unique mythology, and she really doesn't do anything but pop out of things and look terrifying. The real villain of those first movies was the cursed VHS tape. There was just something scary about that unlabeled VHS tape and the idea of passing around an evil object that seemed frightening back when those movies first came out.

Now that almost nobody uses VCR's there is no way for a VHS tape to murder people. Plus the idea of a cursed YouTube video is nowhere near as creepy because it's not something that is tangible. You can't touch it, hide it in a video store, or pass it along to the next person you want to give the curse to. Играть на официальном сайте казино https://vulcan-russiaclub.com можно по этой ссылке.

For the most part I actually really enjoyed this movie. They did a good job of introducing interesting characters, ideas, and advancing the mythology of the Sadako character. Unfortunately, the new villain Kashiwada dresses like a spiky-haired magician and comes across as way too goofy. However, his addition to the movie was necessary since the character Sadako has to have something to act as her proxy so she can pop in at the right times and still be effective.

"Sadako 3d" is as good as you could realistically expect it to be. It's an extremely low-budget fourth sequel to a movie that probably should have never even had one sequel. I'm guessing not many people will be interested in this, but if thinking about those older Japanese films from the late 90's gets you as excited as it gets me, then you might enjoy renting this one. I can't give it a higher score because it's just not a very good movie, but all things considered, it's pretty entertaining.