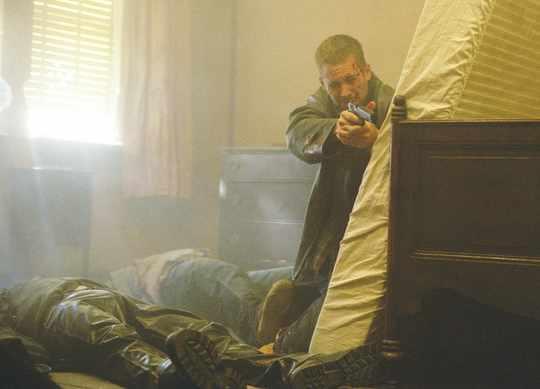 Wayne Kramer’s “Running Scared” is an exemplary flick in that it perfectly embodies the “it’s so bad it’s good” paradox. While certainly not specific to the film world, this phrase is too often tossed around to disavow our own admiration for something that we plainly acknowledge has deep shortcomings. This process of loving a film that is clearly flawed technically or that may be ideologically yet wonderfully shocking in its audacious character, narrative, and stylistic logic is familiar to most horror aficionados. And in a way we can see these imperfections and gaps as being exactly what keep us returning to particular films. “Running Scared” certainly has its fair share of questionable narrative and representational strategies. However, it is more interesting and fruitful to discuss it as an overall project that prods at something larger than itself but nevertheless collapses under the weight of its own ambition. At it’s core, “Running Scared” is a film that acknowledges the close quarters action, suspense, and horror inhabit, seeking to explore what a confluence of these generic themes would look like at particular time.

“Running Scared” follows the events of a single evening in the fictional New Jersey town of “Grimely” (let’s begin the host of non-too subtle fairytale references). As the film opens we watch as a drug-deal goes awry descending into a frenzied shootout resulting in the deaths of two corrupt police officers posing as stickup men. As a group of Italian mobsters escapes, the group’s leader hands off a chrome .38 revolver to Joey Gazelle (Paul Walker) for proper disposal. As Joey returns home to his neighborhood, we are introduced to his wife, Theresa (Vera Farmiga), son Nick, and a young neighbor Oleg (Cameron Bright). Nick and Oleg witness Joey stashing the revolver in a cache of hot mob weapons used in previous crimes that he is holding as leverage in the event he is ever prosecuted. Oleg steals the .38 in an effort to murder his abusive step-father, Anzor (Karel Roden), but after the attempt fails, Oleg runs into the night, taking the gun with him and thereby unleashing a violent series of events as Joey tries to recover the weapon before the police or mobsters.

So why is a seemingly straightforward action-suspense thriller getting discussed on a horror movie website? In many ways “Running Scared” is an ambitious and confounding attempt at creating an anti-action film that sees its supposed hero as a monster of self-preservation. This is accomplished most clearly in Kramer’s decision to split narrative focus between Joey and Oleg’s experience. The film avoids presenting Joey as the two most common “action” movie male types. Joey is neither the flawless body of perfection nor is he the smooth talking smart-ass (think Rambo/Commando vs. McClaine/Indiana Jones). Rather, he is portrayed as constantly teetering on the verge of emotional and physical collapse, a representational choice that makes Joey appear all the more volatile. This more traditional “action” narrative of Joey’s physical violence in attempts to control his exterior world is the primary narrative focus. However, by also giving Oleg another privileged point-of-view we are capable of seeing the world of “Grimely” and Joey as terrifying and dangerous. Kramer implements a number of references to Grimm’s fairytales and Lewis Caroll that don’t quite work, feeling forced or ham-fisted but nonetheless underscore this tone. And like horror, folklore, and fairytales “Running Scared” exists as an amalgam of its predecessors, the other intangibly termed “action” films which Kramer claims to have been influences. In fact the film’s title is much more a reference to Oleg’s experience rather than Joey’s. Through this strategy, the actions of the “hero” character are represented in such a way as to repel Oleg and us. Rather than seeing the hero as an icon of salvation he becomes monstrous and threatening.

The film’s kinship with horror is also expressed in Kramer’s incessant attempts at creating moments of novel shock. Like a large portion of horror film, it is evident that Kramer is more interested in the mechanics of extremity rather than crafting a wholly original narrative. The film revels in showing us the processes of its style. Taking a cue from ye-ole Tony Scott the film is crammed with snap zooms and white flashes seemingly used to punctuate the urgency of a character’s subjectivity. The camera changes perspectives on a dime and effortlessly glides through and above spaces characters are navigating. The color palate is steeped in rich, grainy reds, greens, browns and yellows, sculpting an ethereal nightmare world built of intangible dread. “Running Scared” certainly has a kitchen-sink style aesthetic in which the filmmakers implement stylistic techniques once and then dispose of them on a number of occasions. And while many have criticized these techniques as out of control or exploitative (that is kind of the point), they also work to further articulate the conflicting representation of Joey and Oleg’s experience.

What I find the most enthralling (and slightly hilarious) about “Running Scared” are the lengths the film goes to reinstate/construct Joey as a particular type of hero (i.e. white, institutional law, heterosexual father-husband). As a film produced at a time when support for military action abroad and the executive branch was on the decline it is possible to see “Running Scared” as a film which attempts to rectify “traditional” heroism as defined by particular codes of masculinity and race. However, throughout the film we witness Joey violently, amorally navigating the claustrophobic and delirious cityscape. At times he is even shown threatening his own son or Oleg. Joey unscrupulously tortures suspects and threatens a woman holding an infant. This is a character driven mad by his own sentimentality, in the classical sense of the word. But at the same time the film seems incapable of leaving Joey this way and makes attempts to rectify this at the conclusion. Rather, its more plausible to think of the film as a mirror image of action cinema and an unconscious reflection on the impossibility of that heroism.