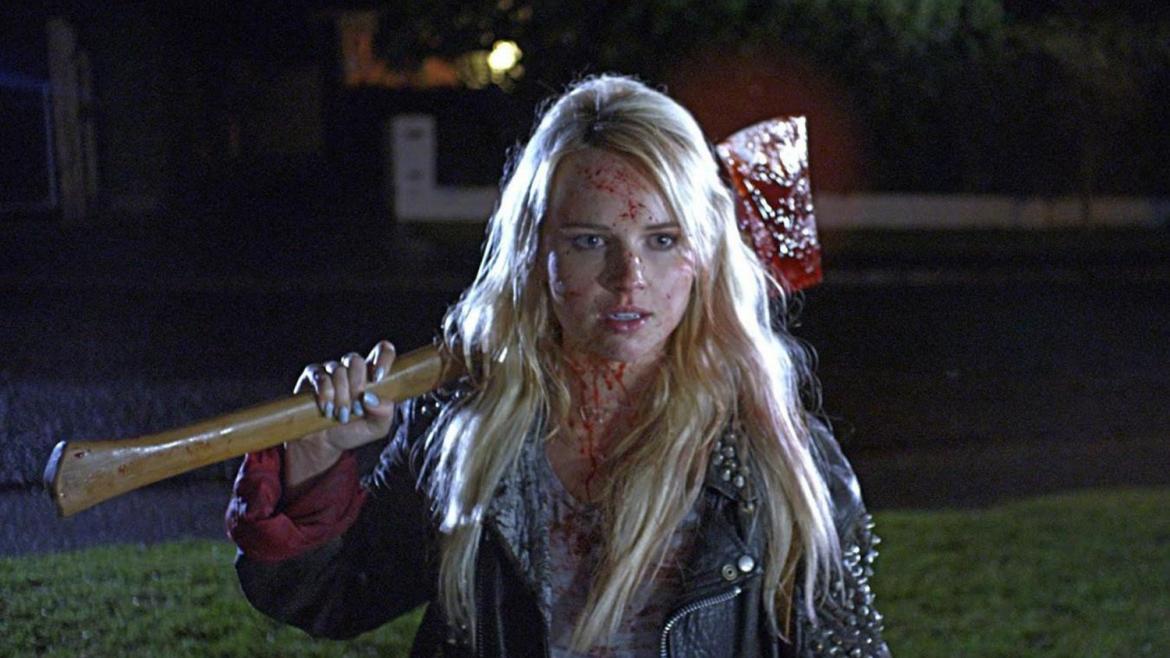 Horror fans tracking the run of great movies coming out of New Zealand (Housebound, What We Do In the Shadows) have a new one to add to their must-see list: an irreverent, demon-filled love letter to heavy metal called Deathgasm. Director Jason Lei Howden has years of experience behind him working as a visual effects artist on several Peter Jackson films, and though the movie is solidly in the tradition of Jackson’s early work, it’s never derivative.

After his mom gets high on meth and fellates a mall Santa (note to prudes: get out while you still can), teenage Brodie is sent to live with his high-strung, hyper fundamentalist aunt and uncle and their bullying jock of a son, David, in a small New Zealand town. Brodie’s inner life revolves 100% around heavy metal (the music and the movie), and with no one similar to relate to, he’s stuck hanging out with the town’s other misfits, a nerd named Dion and a burnout named Giles. Things promise to change for the better when they meet the cocky metalhead Zakk and form their own band, Deathgasm--until their first song, “inspired” by a centuries-old Latin hymn they steal from an aging has-been, causes everyone in earshot to turn into a bloodthirsty demon.

One of the great things about Deathgasm is that Howden shoots his film so honestly that it doesn’t matter whether you love or hate metal music--you’ll love the movie no matter what. He takes his heroes seriously, but never as seriously as they take themselves: one of the funnier moments in the first act is when they make their own napalm to burn “HAIL SATIN” into their school’s athletic field. Deathgasm is the type of movie that shoves title cards declaring “Heavy metal up your butthole” in between scene changes for no reason and manages to make it feel adolescently witty. Howden’s in on the joke without cheating any of his characters.

As I mentioned, Howden was a visual effects artist for Peter Jackson--the Harvard Medical School of disgusting, offensive and hilarious filmmaking (before Jackson won Oscars, remember, he made Dead Alive, Bad Taste, and Meet the Feebles). When the members of Deathgasm, aided by their friend Medina, decide to take back the town from the demons (after a little bit of soul searching on the part of Zakk--after all, they hate the place and everyone in it) the results are giddily unspeakable. Spinal columns are ripped out of bodies like toothpicks being pulled from cheese, and the characters argue about the best possible catchphrases they could use after they split people in half with axes and chainsaws or maim Christians with sex toys. Howden is a natural behind the camera, with a real gift for comedy, and Deathgasm is one of the funniest horror movies in years.

The ending hints at a sequel: it hardly needs it, but if Howden goes for it I’ll be first in line. In the meantime, any horror fan who wants to feed their inner juvenile delinquent won’t find anything more rewatchable this year than Deathgasm.