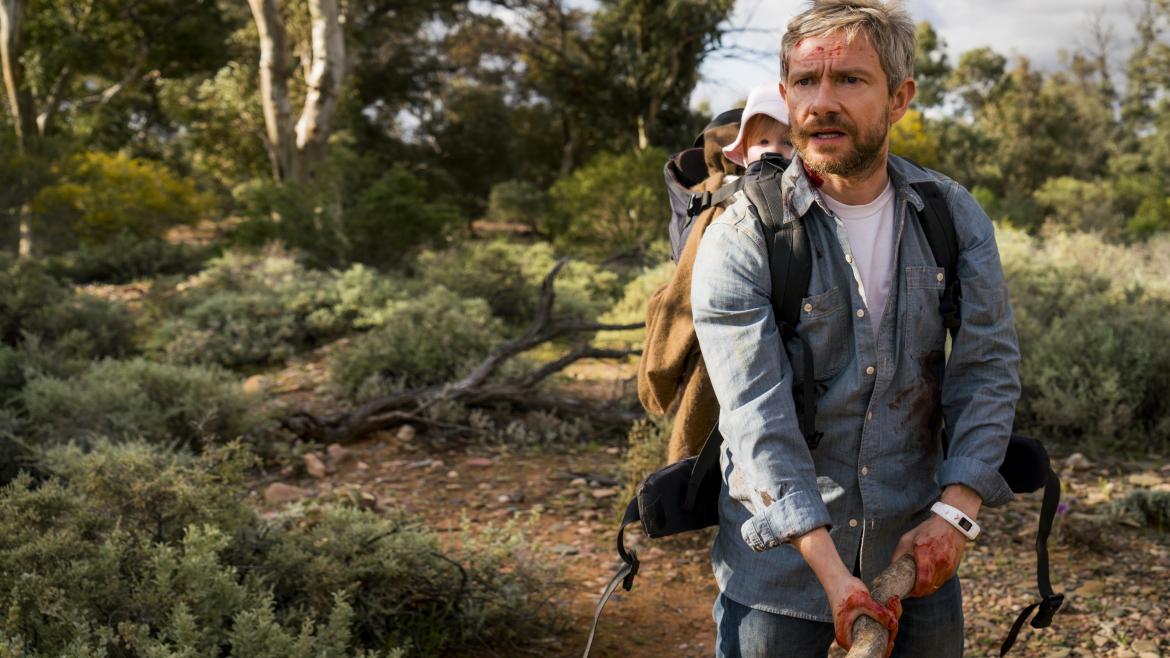 Sitting down to write this I recalled the number of times I wrote a lede discussing the glut of zombie stories in the horror genre. So inundated is that sub genre that even our reviews begin to sound rote. It was into this hostile environment that in the States Netflix released the Australian produced zombie flick, Cargo (also known, by me, as “Dad by Dawn”).

Based on a 2013 short from Ben Howling & Yolanda Ramke, Cargo stars Martin Freeman as the patriarch of a small family struggling to survive a viral outbreak of some kind. When we are introduced to Andy (Freeman) and his wife Kay (Susie Porter) they and their baby Rosie are living on a houseboat that they have commandeered. Things are looking dire. Floating through the Australian outback, they are running out of food and fighting over whether or not to take their chances on the land or risk starving in the relative safety of their floating home. Things quickly go South, however, and the couple is forced to make several impossible decisions that change everything. When Andy and Kay both become infected, it is up to Andy to find a place for Rosie before he turns.

The film creates a unique space for itself within the lore of the undead. Once bitten, a person has approximately forty-eight hours before they turn, which creates opportunities for more deliberation. At some point, the government supplied Contamination Kits, which include a watch that will count down from 48:00 as well as a spring-loaded lancet, presumably to lobotomize oneself.  The design of the zombies is also interesting. Rather than the pale and rotting ghouls we have largely become accustomed to, these walkers largely retain their pallor but they begin oozing an amber goo once infected.

While Cargo does offer some ingenuity, the film largely leaves viewers with lots of unanswered questions. Even more frustrating, the film seems to tread around the edges of some heady topics like race and fracking, without offering substantial commentary. And at the center of the story we have a set of circumstances that could only arise when two adults make a number of very unwise decisions. Of course none of us know how we would handle a zombie outbreak, but from the moment we are introduced to Andy and Kay they appear to be pretty competent and take a number of precautions to keep themselves and their child safe. But within the first thirty minutes things have gone to hell and one can’t help wonder how these character managed to get to where they are in the first place.

The film also employs a parallel plot about an aboriginal girl who has run away from home after her father becomes infected. She and Martin Freeman inevitably cross paths and it is she who must help him find a home for Rosie. This story does not carry the emotional weight it feels like the creators intended, largely because of how secondary they make it to Martin Freeman’s story. In fact, Andy encounters a number of women who have compelling and tragic stories that we largely blow past. Perhaps the most egregious example is that of a young woman named Lorraine who is being held captive by a truly evil man who we see again and again doing monstrous things. When Andy informs Lorraine of his intention of leaving his daughter with her, she begs him to take her and Rosie with him and run. She tells him that Vic murdered her husband and forced her to be his wife. Andy repeatedly talks over her and tells her that it’s “worse out there” without knowing what she has gone through. When Andy and Lorraine try to escape with Rosie, Lorraine is shot by Vic and before her body is cold we have moved on.

Cargo is far from a perfect movie, but Martin Freeman’s performance offers a captivating divergence from his other roles. As Netflix’s horror distributions go this is a pretty good one, but don’t expect it to scramble its way into the upper decks of the zombie pantheon.