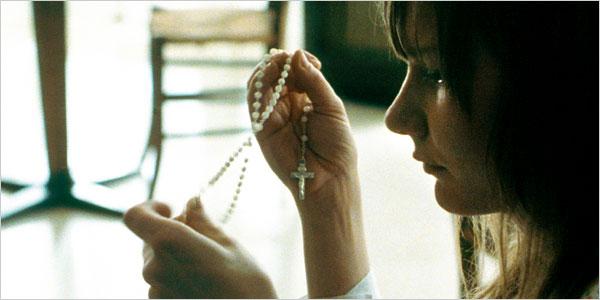 In 1976 a 23-year-old German girl named Anneliese Michel died from malnutrition and dehydration after nearly a year of undergoing the rites of exorcism. Years earlier, Anneliese had spent some time in a psychiatric hospital due to the effects of epilepsy and depression but she, along with her deeply religious parents, was convinced that her problems were caused not by psychological illness but by demonic possession.

After finding a willing priest, the medical treatment stopped and she was subjected to the rites of exorcism which included fasting and doing 600 genuflections in every session, enough to cause the tendons in her knees to rupture. After her death, her parents and the two priests who performed the exorcism were found guilty of manslaughter by a German court.

The story of Anneliese has since been loosely adapted into two movies. The first was a big budget, high profile take on the story, 2005's "The Exorcism of Emily Rose". While not a bad movie, "Emily Rose" fell prey to Hollywood's standard distaste for ambiguity (for further examples compare the 1963 version of "The Haunting" with its CGI-laden 1999 remake). A weird mash-up of "Law and Order" and "The Exorcist", the film pretended to leave what really happened up for discussion but it not too subtly has its thumb on the scales for the “faith” side of the argument over “science”.

The other film based on Anneliese's story is Requiem, a 2006 German film that is a more faithful adaptation of what really happened. Despite it's somewhat misleading DVD cover, Requiem isn't really a horror film at all. Instead it's a docudrama about a college girl (here called Micheala) and her battle with inner demons more psychological in nature than supernatural.

The film begins with Micheala venturing forth from her strong religious background into the new experiences and temptations of college life. She does remarkably well at first, making new friends, attending boozy parties with loud rock music and even landing herself a boyfriend. However, a return of the epilepsy that caused her to spend a year out of high school in a psychiatric hospital combined with a perceived inability to touch religious objects and an obsession with martyred saints marks the beginning of a long, slow descent into mental illness and delusion that ends with her insistently trying to convince a priest that she is possessed.

One of the most remarkable achievements of the film is that it never singles out a character as the villain. It would be easy to make her parents into caricatures of religious fanatics or to make Michaela out to be the victim of exploitative priests but more than anything it's Micheala and the delusions of her illness that lead to her rejection of medicine and eventual death. Her father merely wants his daughter to get better and her local priest even angers her by telling her that the demons the church refers to are metaphorical in nature and not literal beings.

The film is much more about the lead-up to the exorcism than the actual rite, which is only seen in one short scene at the end. The closest thing to a traditional, horror movie scare is a scene where Micheala attempts to prove to her boyfriend that she is possessed by matter-of-factly showing him that she cannot touch a crucifix hanging on the wall. It's a scene both chilling and heart-breaking played brilliantly by Sandra Hüller, who consistently leaves the viewer hoping that somehow against the odds she'll get off her chosen path of self-destruction and finally get the help that she needs.