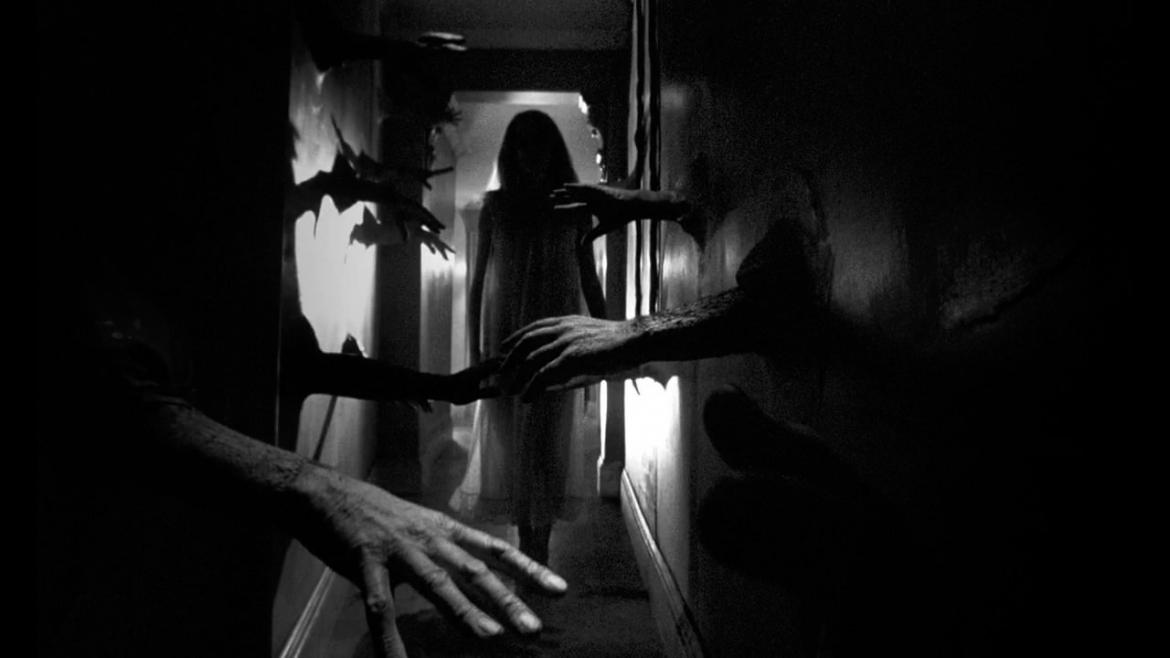 In the opening moments of Roman Polanksi’s Repulsion we watch as titles drift across the eyeball of the film’s protagonist, Carol (Catherine Deneuve). The camera proceeds to pull back as a despondent score plucks, thuds, and reverberates in our eardrums. Slowly a face covered with a thick plastering of who-knows-what calls out, “Have you fallen asleep?” At the film’s conclusion, a carefully orchestrated bookend image offers an uncomfortable answer, suggesting Carol may never have been “awake”.

Polanski’s follow up to his internationally acclaimed first feature Knife in the Water afforded the director more creative freedom. Now operating outside the every-so slightly thawing Polish film system Repulsion comes at an interesting place in horror cinema history as literal ghosts and monsters were shuffled further into the background of second billing b-movies or relegated to specific studios while a more cerebral art house horror began to emerge. Taking cues from an increased interest in self-reflexive stories and techniques from various new wave film movements we can see a developing interest in the horror of the interior. Like many of the film’s predecessors and progeny Repulsion derives a great deal of dramatic punch and thematic resonance through the slipping uncertainty of dreams, reality, and perception.

Carol is an introverted immigrant from Belgium who works in a posh London salon. She spends her days either working or wandering listlessly around her neighborhood eating junk food while attempting to skirt the advances of a neighboring businessman, Colin (John Fraser). At home in the flat she shares with her sister Helen (Yvonne Furneaux), Carol is subjected to leering glances from Helen’s lover Michael (Ian Hendry) while at night she lies awake listening to soft moans of sex emanating from the other bedroom. Eventually Helen and Michael go on holiday, leaving Carol alone to deal with Colin’s increasingly determined advances.

Bare in it’s plotting, Repulsion’s horror is derived from Carol’s descent into insanity catalyzed by her physical repulsion of sexual conduct and contact. Polanski’s assured direction, Gilbert Taylor’s nuanced cinematography, and Chico Hamilton’s unsettling score combine to foment some stark, eerie sequences that imbue quotidian actions and settings with unease and dread. Helen and Carol’s apartment becomes littered with garbage as mysterious cracks appear in the plaster making literal the confining spider’s web of Carol’s mental state. Nightmares and fantasies bleed into her waking life in such a way that we become unsure ourselves of how much is real or imaginary.

While Repulsion’s formal elements are arresting it’s catalyzing conceit seems built upon a male-based vision of the place of women, relying on a toxic and worn construct of woman as virgin or whore. The film suggests Carol must become a compliant nymph, flock to the convent her bedroom overlooks, or perish in her own psychosis. When considering the one other romantic relationship in the film between Helen and Michael we see that even this choice is dubious. Helen may be socially well adjusted and supposedly sexually satisfied she is also blind to Michael’s own self-serving disinterest with the relationship and his domineering behavior. In one sequence an older salon customer discusses sexual relationships with one of the employees, advising her to not put out just yet. “He was practically on his knees…keep him there.” There is a faint argument to be made about women drawing power from their sexuality.  But the film equates this so-called power with the acquisition of wealth and status more so than the true companionship we quickly glimpse in the games the nuns play and the respite Carol experiences while talking to a coworker about Charlie Chaplin’s The Gold Rush. (These moments do potentially offer a counter queer reading of Repulsion). The film dances around this binary rendering of woman as virgin or whore but never seems to cultivate an original or progressive stance, a characteristic which is all the more disheartening given the boisterous formal attributes that work to isolate the viewer and Carol in hallucinogenic fever dreams.

Repulsion depicts an unsavory ultimatum to the sexual revolution; lighten up or become a nun. The film’s stylistic execution and unnerving technical attributes cannot escape it’s boy’s club psychology that reduces its female characters to either sexually subservient to men or asexual beings.