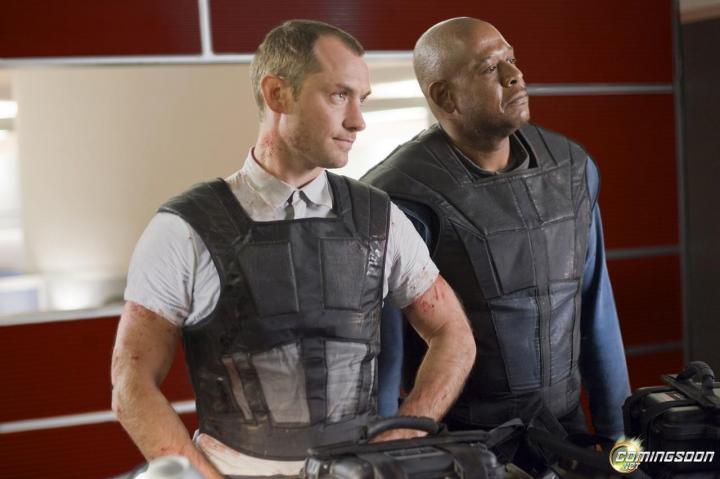 The best sci-fi films ground themselves in a way that allows them to spiral to dizzying, fantastic heights while maintaining enough of a relationship to our reality to permit the necessary suspension of disbelief. It's why the truly great sci-fi -- "Blade Runner," "Alien," "Minority Report," even the old "Star Trek" films -- can throw up the most insane nonsense and still feel more real than many "reality-based" films. As long as filmmakers play by an accepted set of rules about interpersonal relationships, common-sense character behaviors, and reasonable societal changes, audiences will cut them incredible amounts of slack when it comes to the facts about space exploration, time travel or bio-engineering.

The converse situation, which is perfectly illustrated by the new film "Repo Men," is that no amount of fancy science-talkin' or shiny-object-shootin' is going to save a film that does not adhere to the most basic principles of human society (for further study on this see: "The Phantom Menace"). A truly visionary or gifted filmmaker can, from time to time, violate all the rules and still craft something believable and real. Miguel Sapochnik is not that filmmaker, and "Repo Men" never had a hope of being that kind of film.

Set in a nebulous future-sometime, "Repo Men" posits a world where a central company called "The Union" has figured out a way to create mechanical organs that can replace failing human organs. Somehow, with absolutely zero competition, they sell these organs to consumers at exorbitant prices, financed with even more exorbitant interests rates. When the customers can't pay, which based on the film is practically every time, then the titular Repo Men come a calling.

The conflict arises when Remy (Jude Law), part of The Union's most successful repo-ing duo, starts to get a little soft. He wants out of the killing and cutting game, but a freak accident leaves him with one of The Union's artificial hearts in his chest. Forget the fact that as one of their most valuable employees The Union might have a vested interest in keeping Remy alive therefore cutting him some slack on his onerous debt payments, because that wouldn't make a very interesting movie! Instead, Remy can't bring himself to remove organs anymore, and when he falls behind on his payments, his old buddy Jake (Forrest Whitaker) has to hunt him down and take back the company's organ.

On paper, "Repo Men" sounds good enough. And in novel form -- the film is based on the novel "Repossession Mambo" -- a lot of the chasm-like holes might be better explained. But the script that Sapochnik and company finally decided on is such a disaster, it's amazing that nearly any of the film turned out watchable at all. Those few moments, when we look past the utter lack of common sense, we can find a film with some gory, fun stylistic moments. The idea of ad-hoc surgeries performed for the purpose of reclaiming company property does open the door for some goofy, tongue-in-cheek moments, such as Jake using a barbecue knife to remove a kidney from a debtor on the run. Those moments are sadly few and far between, and even worse, they are embedded in a reality that is divorced from all levels of normal human interaction.

As the film opens, Sapochnik deploys some of the standard "society-is-dying" type of found-audio that we've come to recognize from various sci-fi dystopian films. The implication, which is very lightly played on here, is that the rules have changed; society has shifted in some dramatic and disastrous way. These few snippets of audio can't cover for the fact that the logic of "Repo Men" rests on a premise that makes zero sense. Take as a counter-example the recent "Daybreakers." These films are actually fairly similar at their heart: in the future, there has been a disruptive change to the economy -- "now everyone is a vampire" or "now everyone has expensive artificial organs." In "Daybreakers," the central company is more or less intertwined with the state by virtue of the fact that all citizens need blood to survive and it's most efficient for one entity to control the supply (sort of like a present day public utility). The game-changer comes in the form of life-saving fake-blood that can be manufactured without killing humans. Corporate intrigue combines with sci-fi tropes to make for zany fun.

In "Repo Men," The Union is not a public utility, and it's never fully explained how they've become so powerful. That is, why the hell do so many people need fake organs? And where did all the human organs go? Did it suddenly become less cool to be an organ donor? These things could all be dealt with however, if the basic business model of The Union made any sense. As it is, they slap organs into any of the most desperate people, at a cost of around $600k to $1 million. In this situation, the company is taking the financial hit up front, and then charging crazy interest rates. After three months of non-payment they kill you and take the organ. But here's the thing: why would they want to kill anyone? Dead debtors are worth far less than live ones. And getting the organ back is all well and good, but we are shown explicitly how many organs The Union has. What is the marginal value of one more organ, repossessed from a non-payer? And perhaps most puzzling of all: why does an indigent lounge singer -- and love interest for Jude Law -- have as many as ten fake organs? She clearly couldn't handle paying for one, two or even three of them, and yes, they explain that some are black market, but that only raises more questions. Like, why if there is such a strong black market is there no downward price pressure on The Union? I could go on, but this is a review, not an economics debate.

The difference between "Daybreakers" and "Repo Men" is that of the two "Daybreakers" is actually more fantastic -- that is, it requires far greater suspension of disbelief -- but plays by the basic, common sense rules that allow us to follow along willingly. "Repo Men" makes only the briefest attempts to explain its existence, and when it does, it barely measures up to that other, more musically inclined, organ repossession film. The shame of "Repo Men," like other failed sci-fi efforts before it, is that there is an interesting nugget of speculation to build around. It has a compelling "What if..." reason for existing that if carried to fruition with more care and more evenly deployed wit, might have made for a fun and gory movie that was actually worth watching.