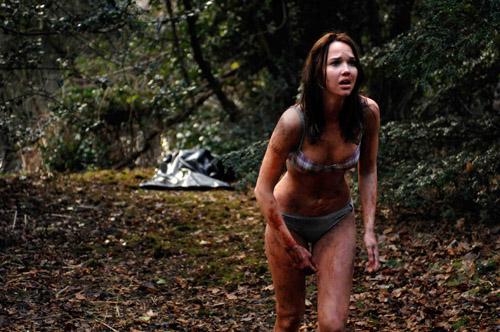 Between television and film, there seems to be a lot of stories cropping up over the last few years regarding rowdy medical students and the kind of shenanigans they find themselves in while trying to undwind from a hard day at the office. Taking its cue from stories like these, as well as revenge slashers like "I Know What You Did Last Summer", "Red Mist" managed to fall into a rather elusive category for me... the enjoyable direct to DVD movie.

Arielle Kebbel ("The Uninvited") stars as Catherine, a young, ambitious medical student who has the misfortune of having a creepy stalker, Kenneth. Kenneth is not exactly what you would call a "smooth" kind of guy. When not taking cell phone videos of naked dead women in the hospital morgue, he's following Catherine around and uttering some of the most awkward pleasantries this side of a turrets convention. One night, while partying after hours at a closed down bar, Kenneth approaches the group, only to be insulted and ordered to leave. It's at this point that he reveals a cellphone video of one of Catherine's friends stealing drugs from the hospital pharmacy, a big no-no for a young aspiring doctor.

In his drunken stupor, Shawn, the partier in question, mixes up a lethal cocktail of drugs and alcohol and has Catherine lure Kenneth back to the party so they can get him blacked out drunk. The plan, as it were, would be to get his cellphone and destroy the evidence against them. Predictably the plan goes awry, when the walking cliche goth girl in the corner spinning music turns on a strobe light, and Kenneth has a seizure. As an argument ensues as to whether or not to save him, the students hesitate too long and Kenneth slips into a deep coma.

The opening 30 minutes or so of this film are played pretty straight up, and I found them surprisingly intense. Director Paddy Breathnach, who is also responsible for last year's indie hit "Shrooms", shows a competent hand behind the camera when it comes to building tension out of fairly low-key situations. Racked by her guilt, it's at this point that Catherine begins researching experimental drug combinations in a desperate attempt to save Kenneth's life. When the drugs begin to work, it's revealed that there is a major setback... out of body experiences. Unknowingly, Catherine has released Kenneth's disembodied soul, and appears to have given him the power to take others over. In a plot device reminiscent of Wes Craven's "Shocker", the killer inhabits various people throughout the next hour of the film, and uses them to help kill off everyone responsible for his sorry condition.

And your reaction to that last sentence will probably sum up your reaction to this film. I was wary of the supernatural jump for the first few minutes, but eventually was won over by Kebbel's engaging performance and a series of seriously well executed death sequences. As Kebbel's character slowly begins to piece things together and figure out that it's Kenneth responsible for the killings, we follow her on her downward spiral from guilt, to fear, all the way through to self-preservation. For a movie deemed not high enough quality to make it into theaters, it displays surprising maturity and balance. Yes it's gory, but there seems to be a lot more going on under the surface for those willing to look.

Which leads me to my biggest issue with the film; the misguided name. I'm told that it was originally called "Freakdog", a name that has significance to one of the characters in the film. I'm not sure that title does it justice either, but it's at least a little more subtle than "Red Mist". That makes it sound like some kind of sequel to "Hatchet", and in that sense I think that whoever made the decision to change it is not only underestimating this film, but horror fans in general. The quote on the cover proclaiming that it's "brutally enjoyable" only plays into the misguided notion that this is some type of "Dead Alive" riff, which frankly isn't doing anyone involved any good, considering the ultimately low key nature of the film.

I enjoyed Arielle Kebbel in the recent theatrical release "The Uninvited", and it was her performance here that really carries the day. I sincerely hope that Kebbel continues to do work in the genre, because she's a young, talented actress with a lot to bring to the horror scene. As far as "Red Mist", I could think of a lot worse ways to waste a Netflix rental, or hell if you're adventurous, even a blind buy. It's nothing spectacular and lacks a certain polish that the truly great horror films have, but I enjoyed getting lost in its universe for 85 minutes, and sometimes that's all you can ask for.