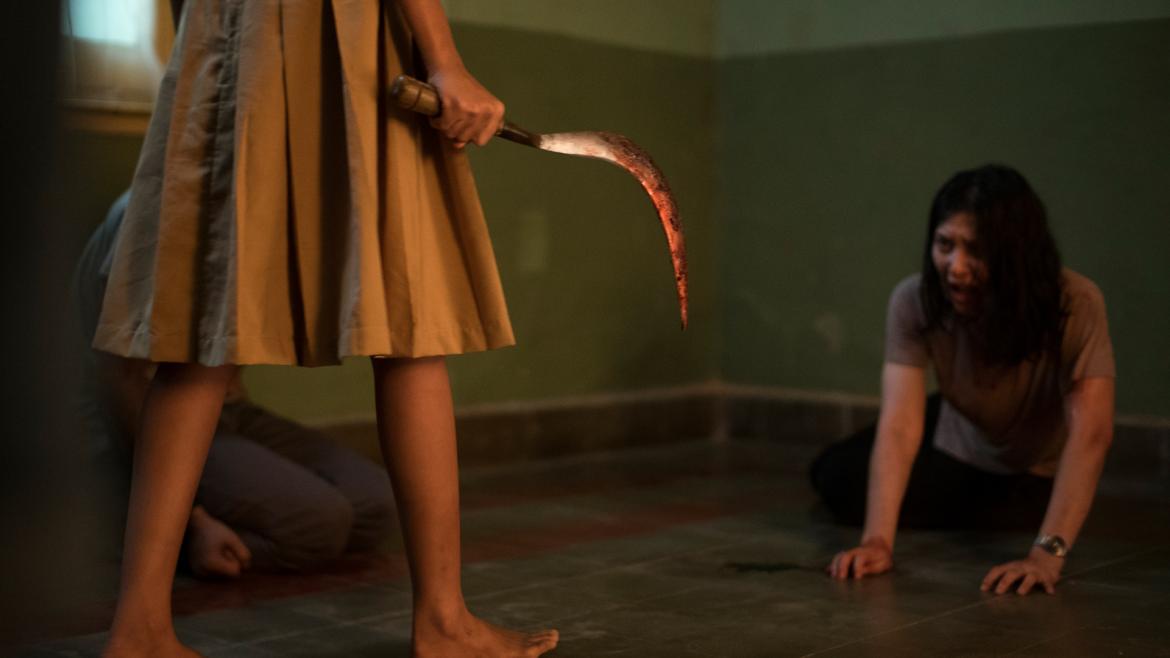 Over the last decade there’s been a major wave of wildly entertaining genre films from a place that might seem surprising - Indonesia. Queen of Black Magic continues that wave as director Kimo Stamboal (Headshot, Macabre) and writer Joko Anwar (Satan’s Slaves) loosely remake a 1981 Indonesian occult horror film for a slow burn that builds to a splattery good time.

Upon receiving word that the patriarch of the orphanage he grew up in is dying, Hanif (Ario  Bayu) brings his wife and children to the orphanage for a kind of homecoming. The current crop of orphans are away on a trip at the time, but the family is joined by some of Hanif’s old friends and a couple of older orphans who help run the place. There’s also a mysterious locked door behind which, according to legend, a former orphanage worker/practitioner of the dark arts was imprisoned and died. Before long it becomes abundantly clear that some supernatural force is hellbent on bloody vengeance for a long-buried secret from the past.

Queen of Black Magic can best be described as a good old fashioned gross out movie. It trades the practical effects for better-than-you’d-expect CGI, but otherwise what you get here wouldn’t be out of place in an Italian flick from 1976 or a VHS video nasty of the 80s. There’s self-mutilation, decapitation, subdermal centipedes, nauseating skin disorders, projectile vomiting, wooly caterpillar munching, grievous bodily harm with a staple gun, and small children in an amount of peril you’d never see in an American movie. By the time the third act rolls around, a Cenobite could come strolling into the background and not look out of place.

So does the story add up? Not really. Are there so many characters that you might need to break out the red-string-and-photograph wall to keep track of who’s who? You bet. Do multiple secondary characters literally get forgotten in the back of the car for an alarming amount of time? Sure do. Does the big climactic show-down at the end wrap up so quickly that you’d think the movie is double parked outside? You’ll see. Enjoying Queen of Black Magic involves a certain amount of hand-waving and answering most logical questions with “a witch did it.” What the witch does though, is pretty fun to watch. The story isn’t that far off from what you’d get at a haunt attraction and the movie operates on the same principle. It exists mostly as an excuse to string a bunch of set pieces together and the good news is that it delivers quite well on those. This is a movie that would probably play gangbusters to a shrieking, squirming, grossed-out crowd.