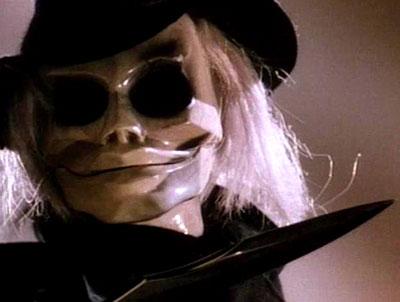 "Puppet Master: Axis of Evil" marks the tenth film to hold the Puppet Master moniker. They've spanned over twenty years and have ups and down as far as quality goes. Unfortunately, none of them with the possible exception of "Puppet Master II" have really managed to capture the style and fun of the original film, which came out all the way back in 1989.

"Puppet Master: Axis of Evil" doesn't try to pick up where any of the previous films have left off but instead tries to create a whole new story line set back during World War II. Right off the bat we're introduced to Danny Coogan, a young cobbler working in the same hotel that the puppet's creator Toulon just happens to be staying in. Danny dreams of heading off to fight the Germans but due to a minor walking problem he's unable to enlist. As Danny heads to Toulon's room in the hopes of obtaining a job with the famed puppeteer he runs into a pair of Nazi assassins who have also visited Toulon in order to steal the secret behind his puppets. Toulon takes his own life in order to keep his secret and Danny ends up taking home his puppets.

This is where the movie takes a real nose dive, which I should point out, is only about ten minutes in. The next fifty minutes feel like a solid eight hours of plot building. Danny of course uncovers the secret to bringing the puppets to life. The same Nazi's we met at the top of the film join up with a Japanese women and with one of the most ridiculous accents to ever be filmed, hatch a plot to sabotage an American bomb factory that Danny's girlfriend also happens to work at. And of course Danny's brother Don gets ready to ship off to war while Danny is left to play with his toys. We don't even see the puppets up and running for a majority of the film, which the last time I checked is why people would watch a "Puppet Master" Movie.

Unfortunately things don't get much better once the puppets do start to take their revenge. Yes the classic characters we all loved in the original films are here, for the most part... Blade, Tunneler, Pinhead, Jester and Leach Woman all make an appearance. Six Shooter pops up but never actually comes to life and a new ninja puppet is introduced. You would think over twenty years after the original film the technology behind animating the puppets would have improved but unfortunately not. In fact I can't remember any film in the long series that featured less actual puppet movement. Action shots are few and far between and for the most part we only see about ten minutes total of anything you would be looking for in a film with the "Puppet Master" name attached.

By the end of the movie I was really struggling to find anything that could be called "good". Two things did highlight the viewing for me though. One, the Blu-Ray disc I got had a small scratch on it so about three minutes of the film was lost for me, and two, the movie only runs an hour and twenty one minutes. Sad I know, but really I had to say something nice. Then again the ending of the movie leaves no doubt that there will be a sequel so at the end of the day an hour and twenty one minute running time is kind of ruined by knowing there's more to come.

Unfortunately, "Puppet Master: Axis of Evil" does nothing to capture any of the things I loved about the first two "Puppet Master" movies. I sat down hoping for a film that would take me back to the heyday of Full Moon Video when movies like the original "Puppet master" along with "Demonic Toys" and "Doll Man" put Full Moon right up there with Troma in my eyes. But really what you get here is a movie that doesn't even rank with some of their more recent films. At the end of the day, Charles Band, the guy who started all the Full Moon fun way back when, has made a film that doesn't even rank up there with "Gingerdead Man" or "Evil Bong".