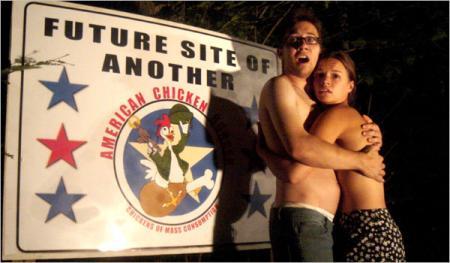 Tromaville has a new restaurant in town; The American Chicken Bunker. Unfortunately for General Lee Roy, there's quite a few people that are unhappy. First up, the parking lot is filled with protesters against the slaughter of innocent chickens, against corporate chains pushing out mom and pop shops and many more. Second; the residents of the Indian burial ground they built the restaurant on top of. With the militant lesbians en force outside, and the vengeful spirits inhabiting the food to take out their frustrations on those that run the joint and those that partake, it's going to be a long and messy opening day for the American Chicken Bunker.

Troma Films are a genre all their own and as such, really can only be compared and rated against themselves. Troma itself pumps out a lot of low budget pulp but when the boss man Kaufman gets involved, you know it's going to get the signature treatment. So it is with their latest full fledge release, "Poultrygeist".

"Poultrygeist" smacks you over the head with their anti corporate food message with a 2x4. Whether or not they are genuine in their loathing is hard to say. It all boils down to a fun movie plot however and that's what counts. Throughout the movie we are treated to a large number of things that people love to hate or point fingers at; corporate food chains, Starbucks, the KKK, militant lesbians, drunken Indians, racism, bestiality... they're all there and I'm sure a lot I missed. Lloyd Kauffman knows how to bring to light social issues with smart ass sarcasm that can only make you laugh harder at the ridiculous lengths some will go to when angry over an issue they have no control over. To round out the absurdity, he also manages to take this socio-policital view, pack it with zombie-were-chickens cum vengeful Indian spirits... and turn it into a musical.

Yes, a musical. With monster chickens. It's Troma, did you expect any less?

The songs throughout "Poultrygeist" are corny, ham fisted and poorly choreographed. Regardless, they still manage to be integral to the story line and add to the low budget charm of it all. Really, they are more of an afterthought and far less effective than the songs used in "Tromeo and Juliet", but that's okay. I still cracked a few laughs. For the actors involved, we see a flip flop of the acting in "Tromeo and Juliet"; our male lead is a fairly strong actor and enjoyable all together. The female lead on the other hand is a bit flat and uninteresting, but she does get topless a lot and makes out with women so it is ultimately forgivable. And as I keep pointing out, it's a Troma flick. We're not expecting "Shakespeare in the Park".

The true beauty of the film arrives with the onset of the zombie chicken onslaught. The gore and gags come trundling along by the bucketful and are well done and enjoyable. The large number of people that they had dressed as monster chickens was hilarious in it's own right and would have been a beautiful sight to see if you happened to be passing by the store on filming night.

Die hard Troma fans will find much to love in "Poultrygeist". It fits in perfectly with the past Kaufman catalog and dare I say... shows an improvement in over all quality. Mind you, you need to be a fan to get the full enjoyment out of this; otherwise you will find it too over the top and silly to be taken seriuosly. Do give it a shot though because it's the most enjoyable and polished flick to come out of Troma to date.