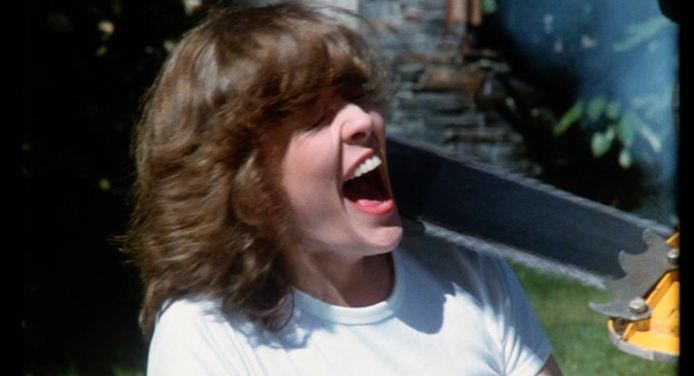 If horror fans have learned anything over the years, its that history often repeats itself over and over and over again. Every successful "breakthrough" in the genre spawns imitators, most of which almost always flail hopelessly into obscurity before people can even become frustrated with their existence. However, on very rare occasions, one is able to find a diamond in the ripoff rough. "Pieces," an oft-forgotten slash-terpiece by Juan Piquer Simón, is such a diamond, if for all of the wrong reasons.

"Pieces" starts off, like many of the slashers of its day, with a brief origin story. In the opening shot of the film, a young boy is piecing together a jigsaw puzzle of a nude woman. His mother, upon discovering his perverted plaything, pitches a fit and demands that he get her a plastic bag to dispose of his apparent plethora of filth. What she receives in return for her request is a fatal axe swing to the skull. In disbelief that a child could commit such an atrocious act, the cops ignore the boy and release him onto the world to grow up into a murderous degenerate hell bent on building his own woman from the "Pieces" of his sexy victims.

In many ways, the first scene of the film gives a great preview for what you are to expect throughout: nudity, violence, laughable acting enhanced by overdubs, and a complete disconnect from reality.

Flash forward 40 years or so and you are dropped smack dab in the middle of a college campus littered with countless horny co-eds, who apparently regularly engage in raucous activities such as 'smoking pot and fucking on waterbeds,' and participating in sweaty near-nude dance classes. In the model of most good slashers, these ladies are beautiful stalk fodder, and serve little purpose other than to get naked and then become dismembered in graphic, disgusting, and often hilarious ways. However, unlike most slashers, there is not a single girl in the pack who is to become the "final girl" in the traditional sense. There is an ex-tennis pro turned police secretary who goes undercover to lure the killer so that he can be caught in the act (yes, really), but she is considerably older than her bubbly counterparts and not nearly attractive or likable enough to evoke any sympathy from the audience.

One of the only characters who can be coded as "good" in the film is the closest thing "Pieces" has to a male lead: Kendall. Although Kendall is in some ways the "final boy" that replaces the staple of the final girl, he is far from virginal. In fact, Kendall is such a stud that there are numerous scenes dedicated to his ability to sex numerous women. Despite being the antithesis of a "clean" protagonist, the character of Kendall somehow manages to be unquestionably likable, which may just be a result of the lack of any other identifiable character. Kendall's nerdy counterpart Willard, is obviously played for comic relief, and succeeds despite the fact that the film is pretty damn funny on its own.

The killer is a total mystery for most of the film, and the potential suspects in the killings seem more fit for the board game Clue than a slasher film. Is it the gay anatomy teacher? The mongoloid janitor? The clueless police chief? You'll just have to watch to find out. It should be said though that preserving the mystery of the culprit is about the only thing that "Pieces" does well by conventional film standards, and the payoff in the end is pretty huge, at least as far as shock value is concerned.

Up until this point, "Pieces" sounds like an exhausting film to make it through. On paper, it is absolutely, without a doubt, an unmitigated piece of shit. However, the charm and entertainment value of "Pieces" is hard to capture in words. Despite everything it has going against it, I was neither bored nor upset during a single moment in this film. When the curtain closed on "Pieces," my face hurt from laughter and I couldn't wait to gather a group of my friends and show them my recent discovery. To me, I'd rather watch this film than any "Scream" ripoff or J-horror remake currently collecting dust on video store shelves. If you are a fan of the genre that doesn't take their love of fine film too seriously, you absolutely have to buy or rent "Pieces." You'll thank me later, I promise.