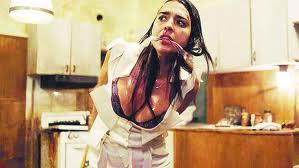 The 2011 Argentinean film “Penumbra,” written and directed by brothers Adrián García Bogliano and Ramiro García Bogliano, is a slow burn. With other movies this is the kiss of death (“House of the Devil,” anyone?), but “Penumbra” understands how to keep the viewer’s interest as tension builds gradually. It has its flaws (including a baffling ending that is more frustrating than gripping), but it’s still worth a watch.

The film stars Cristina Brondo as Marga, a Barcelona realtor staying in Buenos Aires and trying to rent out an apartment building her family had inherited. From the beginning it’s clear that Marga doesn’t want to be there, she makes no secret of her hatred for Buenos Aires and she considers the people there little more than savages. With her power suit and an ear constantly glued to her cell phone, she carries herself like a queen among peasants.

A realtor named Jorge meets Marga at the apartment and says he may have a tenant interested in the apartment, a man named Salva. But there’s a slight catch--they must wait for Salva so the paperwork can be pushed through immediately. Marga is irritated and doesn’t feel it’s worth the trouble, until Jorge says Salva is willing to pay four times the asking price. That piques Marga’s interest and, despite the fact the deal seems too good to be true, Marga agrees to wait for the elusive Salva.

As I said, the movie’s first half builds slowly, but the Bogliano brothers do a good job using this time to build Marga’s character. She is constantly on the phone—conniving with her coworkers and clients, or arranging a rendezvous with her married lover. We may have thought Marga an elitist before, but after these calls we’re kind of rooting for something bad to happen to her.

Salva doesn’t immediately show up, but other associates of Jorge do. A woman arrives, then another couple, all waiting for Salva and all acting more and more peculiar. Marga goes from frustrated to angry to terrified as she realizes (probably later than any reasonable person would) that these people aren’t who they seem. They are a sun-worshipping cult, about to conduct some weird ritual around an upcoming solar eclipse, and suddenly Marga becomes their hostage (and perhaps their victim).

The plot has some weaknesses (Marga makes some pretty ridiculous choices here), but “Penumbra” is saved by the Brondo’s strong performance. She is featured in almost every scene in the film, and the success of the film relies upon her abilities. She does more than an admirable job, playing a character who is unlikeable and unsympathetic, and yet you can’t help but root for her (and okay, I’ll admit, it doesn’t hurt that Brondo is extremely attractive).

As I said, “Penumbra” has its flaws. For one, the music is some kind of freeform jazz that is a disjointed mess. I think it’s meant to portray the chaos around Marga but it’s loud and messy, and pulls you from the tension on the screen. And then there’s the ending. After such a promising buildup, I was so hoping “Penumbra” had a great pay off at the end. But no, it stumbles and falls in the last ten minutes with one of those head-scratching endings that made you think the Bogliano brothers didn’t know how to tie everything together. Too bad, too, because up until that point, I thought “Penumbra” had a lot going for it. It’s still a movie to recommend, but just get ready for a little disappointment at the end.