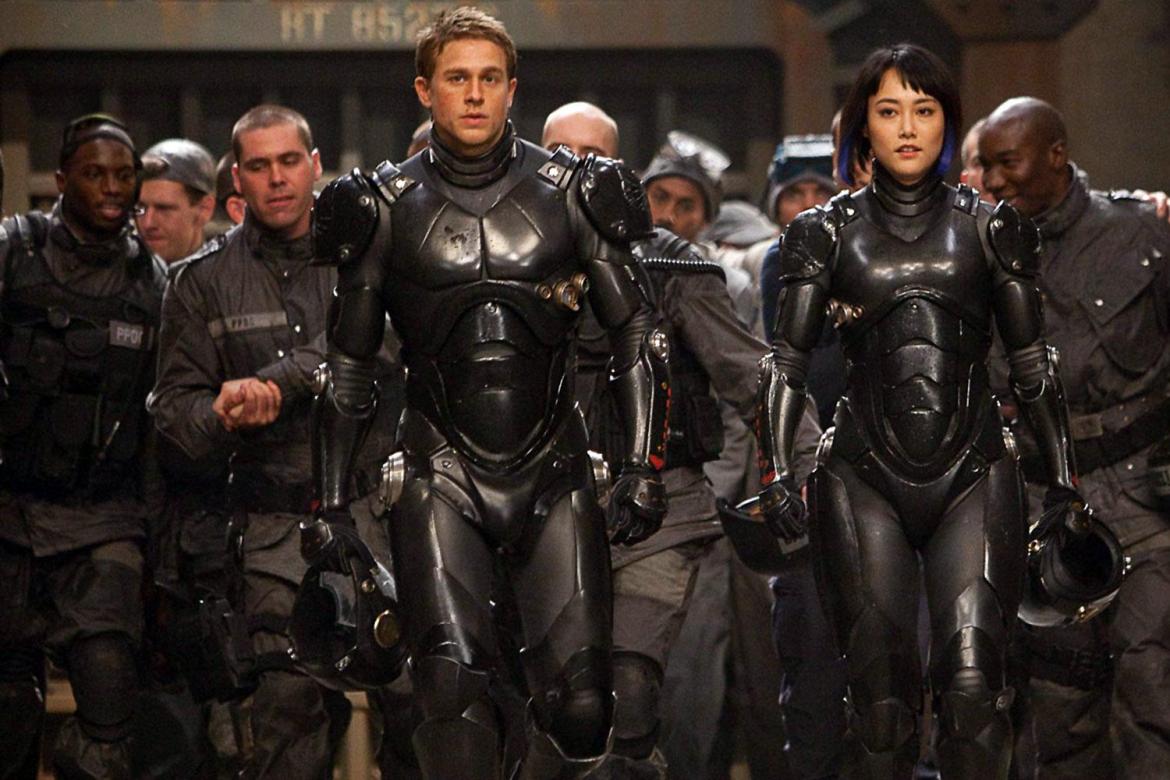 Historically, the onset of the summer movie season means lean times for horror fans. While there is plenty of enjoyment to be dragged out of the big budget comic and light sci-fi films that pepper the summer blockbuster landscape, there’s a general lack of quality films for genre fans to sink their teeth into. Guillermo Del Toro has thrown us excitable devotees a bone this summer in the form of “Pacific Rim,” a Kaiju-tastic summer blockbuster that hits the spot not in spite of its cliches, but because of them.

Straight out of the gate, “Pacific Rim” makes no excuses for the film that it knows it is. The back story is laid plain in the opening moments of the film, chronicling a decades long war between the Kaiju, gigantic monsters that have risen through a breach beneath Earth’s oceans, and the Jaegers, the dual-human-piloted robots that were built to fight them. When it becomes clear that the Kaiju are nearing full takeover, the last four Jaegers are deployed to Hong Kong to mount a final offensive and seal off the breach through which the Kaiju enter the Pacific ocean. In typical sci-fi fashion, the plan goes spectacularly awry, setting off two plus hours of sublimely absurd robot-on-monster action.

If there’s one thing that’s immediately clear about “Pacific Rim,” it’s that it has little time for nuance and subtlety. It does, however, have all the time in the world for snappy storytelling and a rabid enthusiasm for the genre it leans on so heavily. In the character department, there is plenty of personality but very little substance. Aside from Idris Elba doing his Idris Elba thing as the stoic yet sensitive captain Stacker Pentecost, and Charlie Day channeling his inner Rick Moranis for his performance as the wily scientist Raleigh Becket, no one character or actor stands out as particularly memorable. The remainder of the cast owns their roles as a collective rogues gallery of genre standbys, playing second fiddle to the real stars of the show: the humanity-devouring monstrosities that are tearing the planet apart, and the giant-ass robots that punch them.

“Pacific Rim” represents a gargantuan leap in scale for Del Toro from a special effects standpoint. It’s easy to remain skeptical of features that rely so heavily on computer generated battle scenes, but this film contains some of the most incredible creature effects in modern cinema. Impressive technical feats notwithstanding, the true draw of this film is something more intangible. So many scenes in “Pacific Rim” feel like a lifelong genre fan’s sketchbook come to life. It seems that Del Toro used all of the blank pages in his theatrical sketchbook to continue realizing his vision for a horde of be-tentacled horrors, which this reviewer is completely fine with.

It’s hard to turn a truly critical eye on a film like “Pacific Rim” when its so purely enjoyable, but I’d be doing a disservice if I didn’t mention the startling lack of female roles in this film. Aside from the main female protagonist Mako (Rinko Kikuchi), there is only one other titled female role whose lines are more of the grunt and grimace variety than anything that could be considered “words.” I understand this is in so many ways a typical summer sci-fi blockbuster, but seriously, we could have switched out at least one square-jawed hunky white dude for a strong female character and I doubt anyone would be up in arms.

“Pacific Rim” is objectively imperfect, but subjectively masterful. Although the marketing may suggest that its just another film in the vein of something like “Transformers” (or even worse, “Battle Los Angeles”), what truly separates it from the pack is the way that Del Toro’s consuming love for crafting awe-inspiring monsters casts a spell on the viewers that it was made specifically for. Not everyone is going to buy into the concept of a “cult blockbuster,” but the people that do will be truly delighted that someone handed Guillermo Del Toro a boatload of money and said, “Have at it, nerd.”