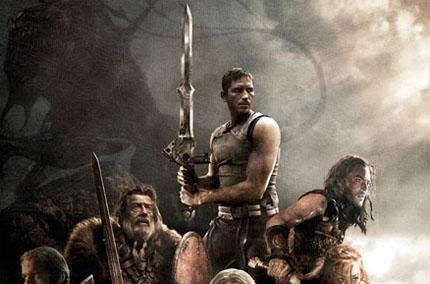 Hollywood has tried to tackle the subject of Vikings a few times in the past decade, but most attempts didn’t pan out so well. “Pathfinder” comes to mind. They depict the rough and burly boys of the far north fairly well, but the stories are generally flat and boring with little to no excitement. With the announcement of “Outlander”, a Viking story with aliens and Jim Caviezel, I was cautiously optimistic. The story in itself seemed so far fetched, I really didn’t know how it was going to come off.

Jim Caviezel plays Kainan, a solider from a futuristic space faring society. On a mission transferring bodies to their home planet for burial, including the bodies of his wife and son, Kainan’s ship is attacked from within by a hitchhiking alien entity causing the ship to crash onto earth. Being the only survivor of the crash, our he hauls himself to shore and begins to investigate his new surroundings: Earth in 700A.D., the iron age. In specific, he has crash landed in Norway, with no one about but Viking tribes.

As the Vikings discover a destroyed outlying village, they fear that the ruler of said village and opposing tribe will blame them for the full scale slaughter of his people. As they comb the countryside for the culprit of the attack, they come across Kainen. Who is this outlander that has laid waste to their rivals town?

Kainen claims to come from an island to the north, in the area hunting for ‘dragons’; for he knows that the real monster behind the attack is the very same ‘Moorwen’ that destroyed his ship and sent him careening through the earth’s atmosphere. Wary at first, the Vikings distrust this stranger and treat him appropriately. Soon however, he proves himself in battle against a giant bear and the clan embraces him as one of their own. Before long they begin to believe his tales of dragons and they band together to take down the beast that stalks the night and lays waste to their kinsfolk!

“Outlander” is an easy movie to describe; it’s the ancient Old English poem ‘Beowulf’ with a scifi spin. This alternate telling seems outlandish at first. Aliens and Vikings, how would that possibly fit? The twist works though and provides us with an engrossing action flick with monsters and burly men. Clocking in at just under two hours, the movie flirts with the epic scale of “Braveheart”, allowing us to follow under the leadership of Caviezel with full hearted support and excitement.

He’s an easy man to become enamored with and he works the experience and other-worldliness of his character to full effect. Honestly, even with the inclusion of Ron Perlman and John Hurt as Nordic rulers, the movie would have suffered some without the stone faced wariness and fight of Caviezel in the lead role. Not to say that these two experienced actors turned in poor performances, they were just cast in more minor roles, small enough that they could not have carried the movie on their own.

The writing for “Outlander” is top notch as well. There are many facets at play throughout the course of the film and they are all handled well. You have John Hurt, an aging tribal king worried about marrying off his daughter to the proper man and choosing an apt successor to his throne. You have Kainen mourning the loss of his family, all while being forced to commit atrocities in the name of expansion. You have a budding love affair between Kainen and Freya, the king’s daughter. This budding romance subplot is handled especially well. Throughout the entire movie it is made obvious that two characters have a spark between them, yet it is never ladled on so thick as to bog down the movie. Щедрые бонусы, кэшаут, конкурсы прогнозов, фрибеты, программа лояльности, а также актуальный и проверенный источник хоккейных новостей - вот что дарит БК Париматч любителям хоккея. На сайте также размещается внушительная база статистики, и с ее помощью ценители ставок сделают логичные, обоснованные и прибыльные ставки.

"Outlander" does drag some towards the middle of the film, but it is wasn't enough to detract from my overall enjoyment. There is a large section of time devoted to character development for both Kainen and the Viking tribe, some of which seems slightly unnecessary and extraneous to the main goal. However, director Howard McCain still manages to pepper these slower moments with some action helping us over the hump and keeping the viewer interested. These early portions of the film also help to blend together a fairly moving ending to the film. The ending, while predictable, is given more weight from all of the development given in the first two acts of the film. Without this time, the ending would have felt more tacked on instead of just right.

While starting out the viewing with little faith in another Hollywood stab at Viking lore, by the end of the film I found myself quite excited and please in what had just transpired. There has been little attention given to the film upon its limited release, but as it turns out, “Outlander” is a pretty damn good genre film. While it may not win any awards, it will entertain you for two hours, and that’s what counts.