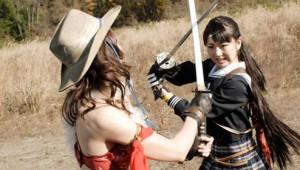 In this increasingly jaded era of cinematic history, the mere utterance of the phrase "video game adaptation" is sure to send waves of nausea and/or furious anger through the veins of even the most laid-back of horror fans. This, of course, is due in part to the questionable films directed by the legendary Uwe Boll, a man whose name has become synonymous with subpar big-screen versions of video games great and small.

And while a few of these risky endeavors have bore edible fruit -- “Silent Hill” and Takashi Miike’s “Like a Dragon” spring to mind -- this rocky road traveled by other opportunistic directors is littered with the corpses of movies that, for one reason or another, failed to replicate the experience of mashing buttons and throwing controllers at the TV in unbridled fits of anger.

Yohei Fukuda’s 2008 bikini cowgirl epic “Oneechanbara” (aka “Chanbara Beauty”), on the other hand, straddles that splintery wooden fence between mindlessly entertaining camp and brain-clogging video game-inspired vomitus. With zombies. Granted, there’s nothing inherently wrong with watching lithe Japanese girls annihilate an army of the living dead with a kinetic mixture of CGI-enhanced martial arts and swordplay for roughly 90 unstoppable minutes, but a little substance does, in fact, go a long way. However, chances are your mind will be so dazzled by skimpy bikinis and kung fu zombies and sawed-off shotguns and impossibly evil doctors that you’ll soon forget that the film’s plot is basically non-existent.

The script, which probably consisted of scribbles spread across three or four unfolded cloth napkins, follows the various exploits of Aya (Eri Otoguro) and her lovably plump sidekick Katsuji (Tomohiro Waki) as they search for the titular character’s estranged sister Saki (Chise Nakamura). For reasons that are still unclear to this particular reviewer, Saki has teamed up with the sinister Dr. Sugita, the diabolical fiend responsible for the world’s unsightly zombie population. As the so-called “story“ progresses, our heroes will team up a with grieving albeit deadly markswoman (Manami Hashimoto) and battle wave after wave of undead flesh-munchers using powers that, once again, are never fully explained. That’s okay -- I like all of my women to glow mysteriously whilst flailing half-naked around derelict buildings.

It's best not to spend too much time dwelling on the tiniest of details, as "Oneechanbara" isn't too concerned with the finer details of its haphazard storyline. Fukuda doesn't spend a lot of time developing his small stable of characters; all we get to chew on are their names and their respective bite-sized backstories, nothing more. Which is great, I suppose, since the film is primarily a vehicle for gore, dismemberment, and juicy zombie bloodshed. This lack of depth does little to intensify the smattering of melodrama the picture occasionally tosses your way. Oh, well. At least they tried.

Thankfully, Fukuda knows how to lense a fight scene. Most of the martial arts madness contained within “Oneechanbara” is surprisingly well-choreographed and fairly intense, that is, when the slipshod CGI isn’t bogarting your attention. The wire work is obvious, yes, but it’s kept to minimum and used only when necessary. If you were more than satisfied with the frantic, over-the-top sword-swinging hijinks nestled gently within Ryuhei Kitamura’s cult favorite “Versus,” Aya and her gravity-defying adventures should, in theory, provide you with 90 minutes worth of solid entertainment. Sure, it’s style over substance, but sometimes that’s okay.

Although it probably goes without saying, “Oneechanbara” is not a good movie by any stretch of your imagination. It is, however, an incredibly fun flick, one that knows exactly what its predominantly male audience wants to see. It’s not on par with “Tokyo Gore Police” or “The Machine Girl,” mind you, but its heart is definitely in the right place. For a low-budget video game adaptation, it’s surprisingly solid. The film’s sequel, “Oneechanbara: Vortex,” should pop up on the proverbial radar later this year, and I for one am extremely excited for its imminent arrival. If it’s as action-packed and utterly brainless as its predecessor, color me girlishly excited. The bikini is optional.