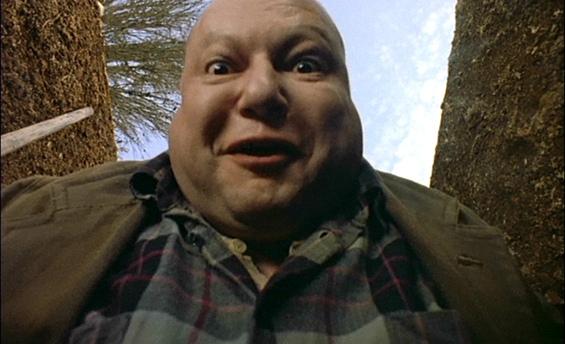 We're just over the halfway mark to Halloween and many horror fans have no doubt already revisited many of their favorite films. In a time centered around nostalgia it becomes increasingly more difficult to take in something new, and its even harder to find genre flicks that last. Despite obvious comparisons that can be made to films like "Dead Alive," (one of my absolute favorites), Michelle Soavi's "Cemetery Man (Dellamorte Dellamore)" succeeds in being both a popcorn flick and an art feature, and should be a welcome addition to any horror fan's Autumn lineup.

The first few minutes of "Cemetery Man" are familiar yet entertaining, as downtrodden cemetery grounds keeper Franseco Dellamorte (Rupert Everrett) struggles to keep the peace at his cemetery when many of its residents come back to life with a hunger for brains. Six shooter in hand, Dellamorte and his mute assistant Gnahgi (François Hadji-Lazaro) keep a close eye on the cemetery and deal the best they can with the reanimated corpses, knowing that seven days after the person's death they are bound to come back to life. In these opening scenes, "Cemetary Man" bears a striking resemblance to another irreverent zombie gorefest from the early 90's, but the bizarre series of events that unfold after this initial setup bring the film into a realm all its own.

Things really start to take a turn for the weird when Dellamorte catches a glimpse of the beautiful widow She (Anna Falchi) at her elderly husband's funeral. Over the next few days Dellamorte comes in contact with She, and convinces her to follow him into the cemetery's ossuary, where they exchange an odd yet passionate kiss between two veils. Eventually, the new lovebirds end up having sex on top of She's dead husband's grave (naturally), awakening his corpse, and things quickly spiral out of control in various sexy, gory, and hilarious ways.

One of the most remarkable things of "Cemetary Man" as a film is that it seems to balance two seemingly opposing schools of film with ease. To the untrained or apathetic eye, this film reads a lot like traditional zombie schlock. With the frequent nudity and a cast of offbeat monsters ranging from undead boyscouts to motorcycle/zombie hybrids, it's easy to turn one's brain off and ignore the fact that beyond its titillating trappings, there's a great deal of artistry taking place. Visually, this film utilizes the trappings of both offbeat low-budget features as well as celebrated art films. Soavi uses the time not spent on raucous action to cultivate a sense of atmosphere and craft surreal beauty in the limited setting of the graveyard. Visuals such as the will-o'-the-wisps that surround Dellamorte and She during their first sex scene are at first enchanting and beautiful, and then provoke a chuckle as the viewer can see the wires that are holding them up. The give and take between these two aspects is what makes "Cemetery Man" intriguing until its final moments.

As the film picks up, Soavi also takes the story in a purposefully confusing direction, as Dellamorte is confronted with various incarnations of the She character, has a run in with the grim reaper, and devolves into a murderous rampage that takes the lives of the living as well as the undead. There's a lot to take in the later portions of the film, and there's very little explanation to bring it all together. However, thanks to the dream-like atmosphere that Soavi created among all of the wackiness, it becomes increasingly easier to accept the confusion. The abstract nature of the story makes "Cemetery Man" a film that becomes richer after you've finished watching it, as various things that didn't make sense at first begin to take shape as part of a greater statement.

"Cemetery Man" is a unique yet familiar feature that should find itself welcome among most genre-friendly crowds. There's something here for everyone, and most scenes manage to succeed on multiple levels at once. Whatever movie-loving hat you happen to be wearing that day, there's a lot to love here. This film has been notoriously hard to get a hold of in the past, but with Netlix and other (completely unauthorized) means of obtaining media, you really have no excuse to skip this one.