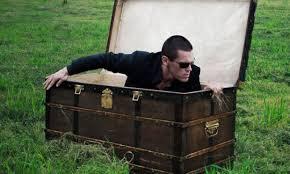 Of all the horror films to be remade in recent years “Oldboy” is probably the one I would think American studios wouldn't want to touch with a ten-foot pole. It’s an incredibly dark, violent, mean-spirited, and shocking film whose finale involves a taboo that American audiences would find revolting. Even though mainstream studios, for whatever reason, are completely stuck in the remake trend, this was an idea that felt so bad I felt compelled to watch just out of sheer morbid curiosity.

Josh Brolin plays a sleazy business man named Joe Doucett, who is imprisoned by an unknown enemy in a hotel for twenty years. Samuel L. Jackson runs a company that is paid to hold people prisoner in this hotel, and every day Doucett is delivered the same Chinese meal with a bottle of vodka. Eventually Joe finds out on a television program that his daughter’s mother is raped and murdered and his daughter is living with an adoptive family. He begins to write letters to his daughter, and starts working out as well as dumping all his vodka down the toilet. After twenty years he is let go and given a suit, an iphone, and an envelope full of money.

Joe makes contact with a young nurse named Marie who helps him out, played by Elizabeth Olsen, and is contacted by the man who had him imprisoned. The man tells him that he has Joe’s daughter held captive and Joe must find out who he is and why he imprisoned him for 20 years. If Joe “wins” the man will give him twenty million dollars in diamonds and then shoot himself, but if Joe loses or fails to participate the man will kill his daughter.

There are a lot of problems with this movie. For instance there are a few fight scenes that feel so lazy that even Steven Segal would be embarrassed. Also some of the tertiary actors give performances that are so wooden I have to wonder if Spike Lee just grabbed people off the street for these parts. According to IMDB the movie cost 30 million to make and honestly I’m wondering where all that money went. Obviously Brolin and Jackson take a big chunk, but for ten times the cost of the original, Lee has created a movie that has the look and feel of a decent direct-to-dvd movie. Plus I've read online that Lee originally had a 180 minute version of this movie, and now that it’s been released on video why wasn't Lee’s cut of the film released also?

That being said the movie isn't particularly terrible. Brolin and Olsen give decent performances and it’s well paced, and reasonably enjoyable. However one of the things that made the original “Oldboy” such a popular cult movie was that it pulled absolutely no punches, and had so many memorable moments. Even though I haven’t seen it in 10 years I can still rattle off a list of crazy moments that make the movie so unique, for instance: a man eats a live octopus, humans that appear as giant ants, the extended hammer fight, and of course the insane gross-out ending. This remake doesn't even try for some of those highlights, and there is nothing bold or new about it that is going to make anyone who has already seen the original remember it a year or even a month from now. If Lee can’t pull off, or doesn't even want to bother to attempt all the highlight moments of the original, or he doesn't want to attempt to create new and equally memorable scenes instead, I don’t understand why he even bothered making this movie.

Regardless of the movie’s quality, or lack thereof, Spike Lee hasn't exactly established himself a man of the people. It seems like he’s always saying or doing something ridiculous (like whining that Quentin Tarantino films aren't politically correct enough, or Tweeting out an Elderly couple’s address and saying that it belonged to George Zimmerman for instance). The theatrical release of this film was also completely overshadowed by a somewhat similar incident where a man claimed that the production company of the film stole his poster art and refused to pay him. He wrote an open letter to Lee, who was angry that the man would even try to contact him, and whether or not this man was actually ripped off, Lee’s complete dismissal of the issue seemed to leave a bad taste in the mouths of people who were interested in going to see this movie.

The original “Oldboy,” whether you like the movie or not, was an important film. It completely blew open the door for Korean genre films to be seen by American audiences and paved the way for us being able to find even better Korean films, in my opinion at least, such as: “The Host,” “Memories of Murder,” and more recently “Bedeviled.” If you haven’t seen the original and are interested in the remake, do yourself a favor and just watch the original instead…or if you have already seen the original just watch that one again. While Spike Lee’s “Oldboy” is not a terrible movie by any stretch, it’s one of the more pointless and half-hearted remakes that I've seen since this whole remake trend has started.