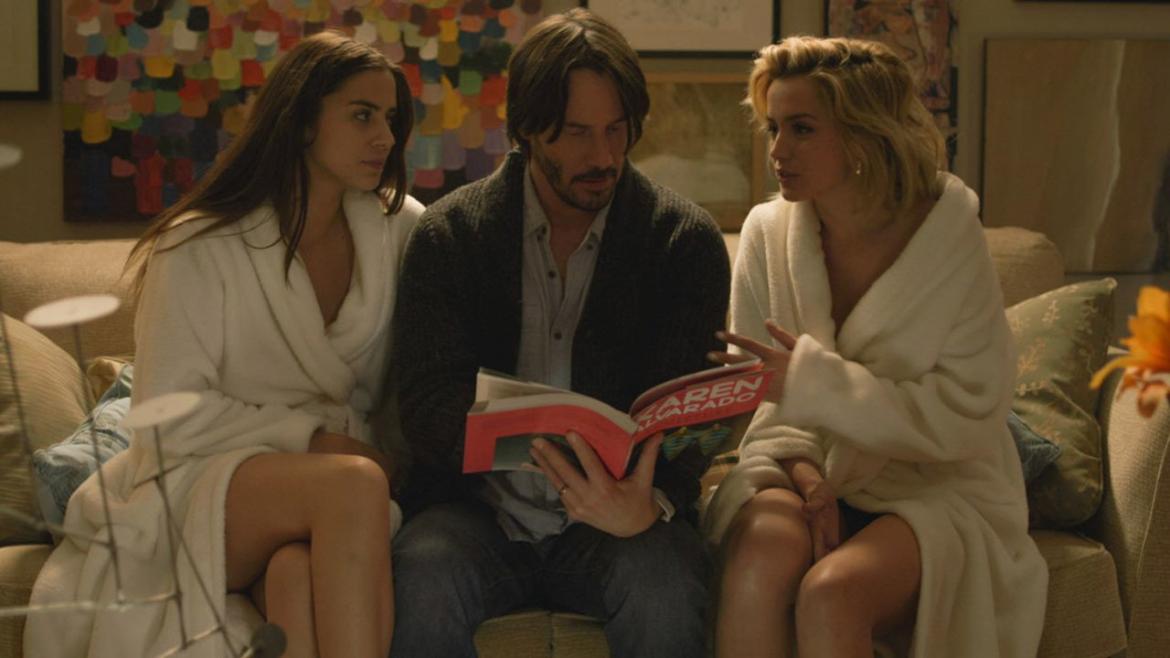 It's a good time to be a devout Eli Roth fan. After an eight year hiatus (six if you don't count the nearly two year delay for The Green Inferno) the filmmaker is back in full swing with two movies released within just a few weeks of each other- and they couldn't be more different from one another. Perhaps its the fact that Roth utilized the same writing team from The Green Inferno, but his "home invasion" thriller Knock Knock (a reimagining of 1977's Death Game) suffers from many of the same eye rolling tendencies, but still manages to be Roth's most mature- and least violent- film to date.

Roth introduces devout family man Evan (Keanu Reeves) and runs him through the infidelity ringer. While his wife and two kids are headed out to the beach over Father's Day weekend Evan stays home to work. One night two beautiful strangers, Genesis (Lorenza Izzo) and Bel (Ana de Armas) stumble on his doorstep lost and soaking wet from the rain. Trying to be a good guy he invites them in to dry off and wait for an Uber to take them home. While getting to know one another Evan lives to regret that he ever answered the door as his house guests prove to be a little more than he can handle.

As is typical for an Eli Roth movie Knock Knock takes its sweet time getting to the nitty gritty. In the lead role Reeve's may appear to be the film's MVP, but it's Izzo and de Armas that steal the show. Utilizing a lot of duplicity with the film's villains Roth and his writing team have certainly found a more appropriate outlet for their pitch black sensibilities, but at times still rely too heavily on immature cliches as a crutch that hobbles the film's first act. Once our femme fatales' true colors begin to bleed through their damp Bed Bath & Beyond robes, the fun really begins. The one two punch of Izzo and Armas is a potent one to say the least and the two shoulder the responsibility of livening up this party before people abandon ship like champs.

Reeves, throughout his career has taken it on the chin for being kind of a wet blanket and having no charisma or range as an actor. Hence the shame when he tries to buck the trend and do something a little different and subsequently is almost impossible to take seriously. In the beginning he's just a good guy trying to do the right thing, but when his anger boils to the surface and he's shouting sexist insults and sexually explicit actions out of rage, it's hilarious in an odd awkward sort of way.  Still though, in some ways maybe that's the point. Проверенные няни Москвы. Частные объявления. A good guy being pushed to the edge and begins swimming in unfamiliar water might indeed seem off putting, but it's Izzo and Armas who delight in the psychological torment of their victim and it's both funny and terrifying at times.

Through all the sex and taboo nature of the plot what Knock Knock lacks is a brooding sense of tension- likely in service to its sometimes campy tone. Roth's latest wears its themes on its sleeve and because of that dread is lost even through the unpredictable actions of the antagonists. Knock Knock is a step in the right direction for Roth as filmmaker, but it teases and teases then nods off just before delivering the happy ending.