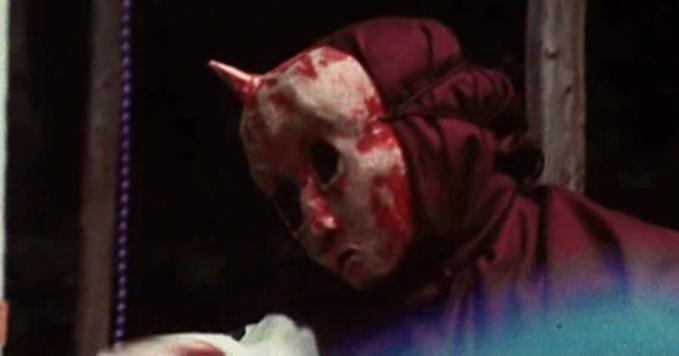 Despite what my track record on the site would indicate, I actually really dig Japanese horror films. At least the original ones that don’t have cursed video tapes, Youtube channels, cell phones or text message based novels (yes, I’ve reviewed all of those) or that annoying wet girl ghost from like 80 other movies. “Noroi: The Curse” came heavily suggested to me by a friend, so I went into it open-minded, hoping for the best. While it’s certainly not an amazing film, it has some legitimately creepy things in it and is one of the most inventive uses of the first person style I’ve seen. Unfortunately, it’s also about a half hour too long and a bit too convoluted to be an instant recommendation.

One of the biggest problems inherit in first person films is the limitation that comes from not being able to switch up the perspective or framing device. “The Curse” cleverly avoids this problem by presenting itself as the raw footage from the filming of a documentary. Being raw footage, we still get everything from that intimate, unpolished first person perspective. But as the documentary we’re watching was never finished, the narrative will occasionally switch out of the first person perspective and fill the gap with a style more fitting for that specific story-telling task. While the vast majority of the film is raw footage, one of the characters is introduced via a segment on a Japanese game show, a major plot point is revealed through an old home video and the conclusion comes from straight-up found footage with no documentary angle. The end result of this narrative shifting is pretty cool. By having all this raw footage interspersed with other primary sources, the film effectively puts the viewer in the position of an investigator, slowly piecing together the threads of the film and drawing their own conclusions about what’s going on.

Unfortunately though, trying to piece everything together is more difficult than it should be. The basic premise of the film is that there’s been a mysterious series of deaths and disappearances which are all tangentially related. Our main character, a paranormal investigator named Kobayashi is filming the investigation for a documentary on this potential curse. As we learn more about the curse and it’s victims, things quickly get out of hand. Characters are introduced only to be killed off minutes later, sometimes they’ll disappear and then reappear later after they’ve been forgotten about and the vast majority of them ultimately really contribute nothing to the overall story or plot. Keeping all these characters straights becomes really challenging and hampers the film as some of the more important characters get lost in the sea of unimportant supporting characters.

It also doesn’t help that the first hour of this film is a bit meandering, to put it lightly. Before we settle on the plot involving the curse, we’re following the investigation of some strange noises coming from a house. Then we’re following the story of a young girl who demonstrated some remarkable psychic abilities on a televised game show. And then we’re following a movie star who broke down on a reality show. And then a seemingly insane self-proclaimed psychic. While it all comes together by the end of the film, the impetus driving us from one storyline to the next is sadly absent. As a result, while you’re watching this there’s seemingly no rhyme or reason for all the cutting from story to story which is really confusing and unclear. With some tighter editing and more clear motives, this problem could have been eliminated, but as it stands, it’s rough to make it through the first hour of this film.

If you do make it through though, you’re in for a treat. The final hour of this film is tight and quickly paced. Thankfully, once everything gels the story makes sense and moves forward in a clear path. And even better, there’s some legitimately creepy stuff here. The imagery in the second half of the film is really unique, memorable and pretty unnerving. While there’s some questionable CGI towards the end, if you can look past it the ending of this film is up there with “The Blair Witch Project” when it comes to tense, anxious moments in horror.

While deeply flawed, “The Curse” does stand out in the crowded J-Horror genre as a solid film worth being on the radar of American fans. It makes the most of the first person gimmick, avoids a lot of the pitfalls other J-Horror films makes (ie, it’s nothing at all like “The Ring”) and contains some genuinely disturbing images and themes. While the first hour is a bit tedious and takes a lot to slog through, those able to make it through to the second half won’t be disappointed. While not the easiest film to find Stateside, if you do ever happen to come across a copy, it’s definitely worth spending two hours with.