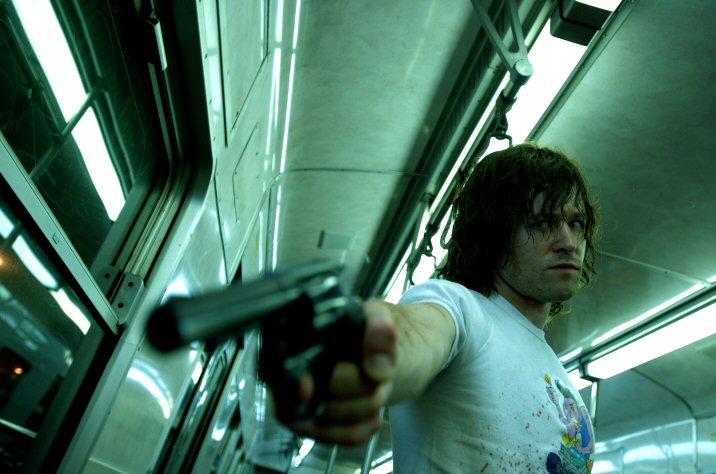 Every person we encounter no matter how distant or dear to us has a remarkable story. Most of them we will never know. Our predispositions, egocentricity and the pace of our lives render meaningful interactions a luxury not a routine. In most cases what is lost to us is a chance to listen and perhaps connect with our fellow man on a more profound level. In Matthew Saville’s debut film “Noise” there is a great deal more at stake for the two stunted characters at the center of the film.

As “Noise” begins young Lavinia Smart boards an evening commuter train on the outskirts of Melbourne, Australia. She is preoccupied by the music in her headphones and a portrait of herself that she is taking home. Once the train starts to move she realizes that the occupants of the car she has entered have all been gunned down and that she is alone in that car with the man responsible. He allows her to live only because the doors open in time for him to flee.

Shortly thereafter we meet Constable Graham McGahan, moments later a ringing in his ear causes him to lose consciousness and crack his head open on an escalator. McGahan learns that he has idiomatic tinnitus and after a lot of friction from the duty sergeant is given a post at a remote interview station. The station has been established after a local woman turns up dead in a field and the police suspect that her homicide may be linked with the train shooting. Graham spends countless nights interviewing locals, staving off boredom and dread as he faces the possibility that his tinnitus may be linked to a tumor.
Meanwhile, Lavinia is slowly succumbing to paranoia after she learns that the killer may have her name as well as the picture she brought on the train with which to trace her. The community at large also begins to bristle with anxiety as every oddity and deviation is held up to greater scrutiny with a killer on the loose.

Matthew Saville’s “Noise” is a character study as well as a meditation on communication. The characters are all afflicted by the noise of everyday life in a way that prevents them from realizing many things that they need to make them happy or keep them safe. In the case of Graham McGahan, the uncertainty over the cause of his tinnitus is creating a rift with his girlfriend and further alienating him from his job. It’s a job that he seems increasingly certain isn’t for him. Lavinia cannot go on living because every corner holds a threat one she cannot alleviate and will not talk about. This leaves her to try and replicate a normal life with a heavily traumatized mind.

“Noise” is a slow burn to say the least. The unease is omnipresent and boils over only after long passages of quietude. This structure reinforces the isolating nature of the characters’ predicaments. Victims without peace; cops without answers, the dynamic reverberates a progressive tension that creates collateral casualties and adds to the spiritual noise, drowning out procedure and brutalizing communication. The greatest shortfall of every person in the film is communication. By the time Graham and Lavinia are able to share and listen the dye is cast for a continuation of the tragedy that surrounds them.

Echoes of Gus Van Zant’s “Elephant”, Peter Weir’s early work, “American Beauty” and even Paul Haggis’ remarkably overrated cliché fest “Crash” spread throughout “Noise”. It’s an amalgam that Saville makes work reasonably well. The sensation of a leeching threat leaves the viewer fearing for the safety of the players for most of the film. The sedate moments and the blossoming relationships augment the impact of the finale. As one might expect the sound design is exemplary. Emma Bortignon’s work portrays a sonic reality consumed by droning background noises that devour silence and obliterate the ease and comfort of the viewer. Well shot, nicely cut and capably acted, this is a solid debut feature for a director worth following.

That said “Noise” isn’t completely successful at what it shoots for. There are performance issues early on that make the slice of life style seem somewhat stagey. And while I understand this is not a horror film some of the moments of violence and tension seem underwhelming. Perhaps this was done to keep from placing too much focus on these aspects, but for my money making the brutality more impressive especially in the opening train sequence would have turned the audience’s tension into full flowered dread and audience fear for the characters’ safety into full blown anxiety.

All that said, “Noise” is a good film about the human responses to trauma and instability, and the profound loneliness that evolves out of those choices. It is also a film laced with allusions to the Australian way of being, some of which are accessible to everyone others which may be more nuanced. The feeling of menace is strong throughout and Brendan Cowell’s performance as Constable McGahan is very good. His character arc is simultaneously maudlin and triumphant, and it is his well crafted journey which elevates the movie out of a creeping gloom in the final act. “Noise” won’t satisfy those looking for a gore fest but if you like gnawing uncertainty and thoughtful explorations into human interactions it is well worth your time.