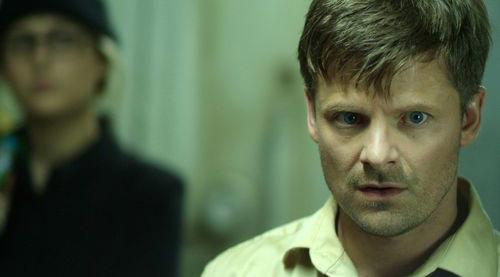 There was a time when Steve Zahn, Leelee Sobieski and Danny Glover were all hot commodities in the film world. That's not so much the case these days, but all can still turn in a decent performance now and then. Throw them all together in a weird little thriller and you have the makings of a watchable movie though not necessarily one that's remarkable in any sense.

Three strangers on a train; Peter Dobbs, an alcoholic salesmen heading home from his company Christmas party. We have Chloe White, a quiet and quirky med student on her way home for the holidays. Finally we have Miles, an aging train conductor working his way through his wife's medical bills. All seems a quiet Christmas Eve as the three strangers cross paths in the rear car of a historic passenger train. That is until a certain unsuspecting man boards with a package and promptly passes away in his sleep. Curiosity gets the best of the trio as they opt to peek into the man's package to discover riches beyond their belief, all wrapped up in an old ornate jewelry box. Unable to pass up a chance at untold wealth, the three conspire to make the jewelry box their own.

The beauty of "Night Train" lies in the fact that it is a movie for the sole purpose of telling a story. There are a few exciting visual scenes, but it is primarily these three experienced actors working a story. It isn't flashy, its not crazy, loud or full of jump scares. It is simply spooky and rather thought provoking. The characters are developed fairly well and new ones show up throughout to keep things interesting. This all works well and is pretty vital considering the scenery of the film rarely changes. All of it takes place in the confines of the train. That's it. There are some CG shots that give us glimpses of the train traveling the countryside but other than that, its all internal. This forces us the viewer to concentrate intently on the performances and thankfully for us, Zahn, Sobieski and Glover do the job just fine.

"Night Train" isn't without its faults though. They rely heavily upon a convoluted story that they give us little to no detail on making it hard to identify with much of anything. With its slower pace and dreamy atmosphere, the movie is definitely sleepy in feeling and could be hard for many to sit through. If you can let yourself disappear into the plot you'll be alright. If there's the slightest chance that you're not in the mood for a quiet head space film, you'll be lost and bored in no time. This isn't to say the film is bad, it is just of a taste that isn't for everybody. Feeling much more like a 1920's noir than a thriller or horror film, I found that it worked for me.

This film isn't out to scare the pants off of you by any means. They are out to give you a few chills, a few laughs and some mystery and they deliver fine there. One of the highlights as far as characters go is Sobieski's Chloe White. Bedecked in black from head to toe, its hard to say what exactly her motivation is. She slowly reveals herself to have a dark side and a penchant for morbid tastes which comes to the surface when talk of disposing of bodies comes along. She manages to give us bits and pieces that make her character more and more of an oddity. The point here is, without these gifts, the characters may have fallen more flat making the movie a bit more of a chore. While Zahn and Glover did fine in their respective roles, there just isn't much to their characters to bring to life.

"Night Train" is a decent movie; while there is nothing here that will astound you or bring new strides to the thriller genre, it is still a very watchable film. It feels the perfect fit for a rainy Sunday afternoon to while away some ours. A good story, and a decent movie. It is nice to see these familiar faces back again and working well together.