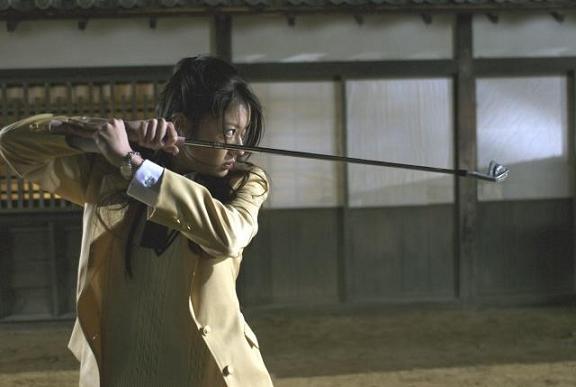 Expectations are a funny thing. Depending on which way you're swaying, they can either completely ruin the movie you're about to watch or turn it into one of the greatest cinematic experiences you've ever had. Because the Internet is a virtual bee's nest of syrupy fanboy buzz, sometimes it's hard not to get sucked in, especially when you're dealing with films that tend to garner a huge cult following. And while I do try my best to avoid becoming yet another nameless victim of the soul-shredding, flesh-munching Hype Machine, sometimes I find myself tumbling helpless into its gaping maw. Insert putrid crunching sounds here.

Takuji Kitamura's melancholy 2007 romantic action flick "Negative Happy Chainsaw Edge" is a rare example of a motion picture greatly exceeding my admittedly lofty, unrealistic expectations. It was recommended to me by a friend who absolutely adores this current wave of extreme Japanese cinema, in particular "Tokyo Gore Police," "Meatball Machine," and the 2008 cult classic "The Machine Girl." Oddly enough, Kitamura's stylish adaptation of Tatsuhiko Takimoto's novel is as far from the aforementioned titles as humanly possible. In a good way, of course.

Contrary to what you have gleaned elsewhere, “Negative Happy Chainsaw Edge” isn’t packed to the rafters with dismemberments, arterial sprays, or an endless barrage of kinetic action sequences. Instead, it focuses on the misadventures of a high school slacker named Yosuke (Hayato Ichihara) and his reluctant girlfriend Eri (Megumi Seki), the latter of whom spends a large portion of her free time battling a mysterious, otherworldly villain armed with an enormous chainsaw in public places. So enamored and love struck is our hero that he willingly tags along for these epic battles despite Eri’s insistence that he stay as far away from this madness as possible. Naturally, Yosuke doesn’t listen, and ultimately finds himself in an epic struggle between good and evil.

Hardcore fans of Japanese action cinema will surely balk at the several touching, introspective moments sprinkled throughout “Negative Happy Chainsaw Edge,” especially since Kitamura shifts the focus from his expertly-executed fight sequences to Yosuke and Eri’s budding relationship about halfway through the picture. However, despite my own initial knee-jerk reaction to this unexpected turn of events, I grew to appreciate what the filmmakers were attempting to accomplish. The picture is more about loss, loneliness, and the feeling of worthlessness we all experience at one point or another, skillfully disguised as yet another brainless action flick featuring beautiful teens in schoolgirl outfits battling insanely monstrous beings from other dimensions.

If the previous paragraph has left your cinematic flowers more than a little wilted, please, do not be discouraged. The film has plenty of girl-versus-chainsaw insanity to please even the most ravenous of action-addicted junkies. Most of these ambitious sequences incorporate some fairly believable CGI, but I seriously doubt you'll notice the seams as the cinematography is beyond gorgeous. Snowflakes have never seem quite as ominous as they do here. Unless, of course, you're completely freaked out by "The Polar Express." Don't be ashamed; you're certainly not alone.

Silly jokes aside, "Negative Happy Chainsaw Edge" is a fantastic film, and should satisfy hard-to-please fans of Japanese cinema as well as casual movie-goers with a soft spot for cheesy, love-encrusted romantic subplots. The performances are sharp, the villain is intimidating and suitably mysterious, and action is stylishly photographed. It's a bit more intelligent than your average, everyday genre picture, and does a wonderful job of capturing teenage love without resorting to cheap clichés or melodramatic silliness. I'm actually very surprised that this film hasn't received more intentional attention, since it seems completely in-tune with the sort of stuff that's getting picked up left and right by opportunistic Western distributors. When this thing finally hits American shores, emo horror nerds and their Asian girlfriends are going to love it.

War of the Gargantuas